Share
College of Arts and SciencesCommunication Sciences and Disorders

Researchers in the Department of Communication Sciences and Disorders (CSD) are testing a cutting-edge method of electrical brain stimulation to help stroke patients suffering from a language disorder called aphasia. The National Institutes of Health-funded study, led by Ellyn Riley, associate professor in CSD, is currently recruiting participants who have had a stroke in the left side of their brain and who have experienced speech and language difficulties following their stroke. 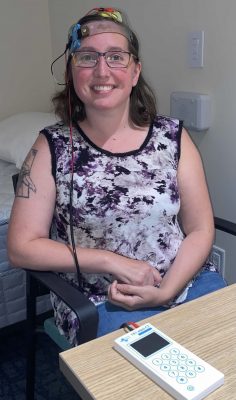 Riley says this new easy-to-use and low-cost electrical stimulation technology has the potential to boost the effects of the treatment speech-language pathologists are already doing. With the relatively short window of opportunity for rehabilitation for stoke patients, maximizing the effectiveness and efficiency of treatment is essential.

Aphasia affects approximately one-third of individuals who have had a stroke. According to Riley, communication for these individuals can be very difficult and each person’s experience with aphasia is unique.

Individuals with aphasia usually work with a speech-language pathologist (SLP) to practice tasks like naming objects, forming speech sounds or generating grammatical sentences in order to “rewire” the brain as it recovers from the stroke. 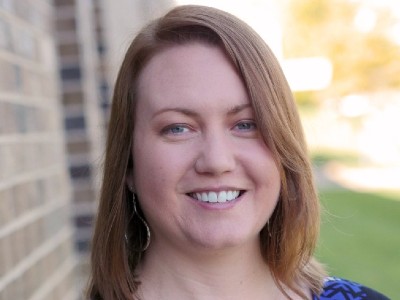 Ellyn Riley, associate professor in the Department of Communication Sciences and Disorders.

The electrical brain stimulation used in the study is called transcranial direct current stimulation (tDCS). It works by delivering a very small electrical current to specific parts of a person’s brain via sponge electrodes attached to their scalp. The positioning of these electrodes is thought to encourage specific parts of the brain to become active, making it easier for the neurons in those areas of the brain to send electrical signals to other neurons during speech and language therapy.

“By making these brain areas more active during therapy, we can potentially further facilitate the ‘rewiring’ process that is going on in the brain during recovery,” Riley says.

The Aphasia Lab is currently seeking participants from the Central New York area. The study requires patients to visit the lab for several sessions to receive treatment. Enrolled participants who are considered eligible will receive 10 sessions of speech and language treatment with a speech-language clinician while simultaneously receiving tDCS. There is no charge for participants to receive this treatment and they will be compensated up to $150 for their time.

Anyone interested in the study can email aphasia@syr.edu, visit the Aphasia Lab website or go directly to the study eligibility survey.