Like many soldiers who are leaving the military, U.S. Army Specialist Luke McKean had an idea of what he wanted to do when he transitioned to civilian life but wasn’t exactly sure how to go about it.

But thanks to a partnership between Syracuse University and the Fort Drum Regional Health Planning Organization (FDRHPO) in Watertown, McKean has charted his course to become an athletic trainer, strength coach or personal trainer.

McKean recently spent two weeks at the University shadowing Tim Pike, the head athletic trainer for the Syracuse football team. The experience convinced McKean that he wants to pursue the career path he had discussed with representatives from FDRHPO, which is near the Fort Drum Army base where McKean is currently stationed.

“It’s been very informative” McKean says. “It definitely helps me see that I’ll want to pursue this when I’m out of the Army.” 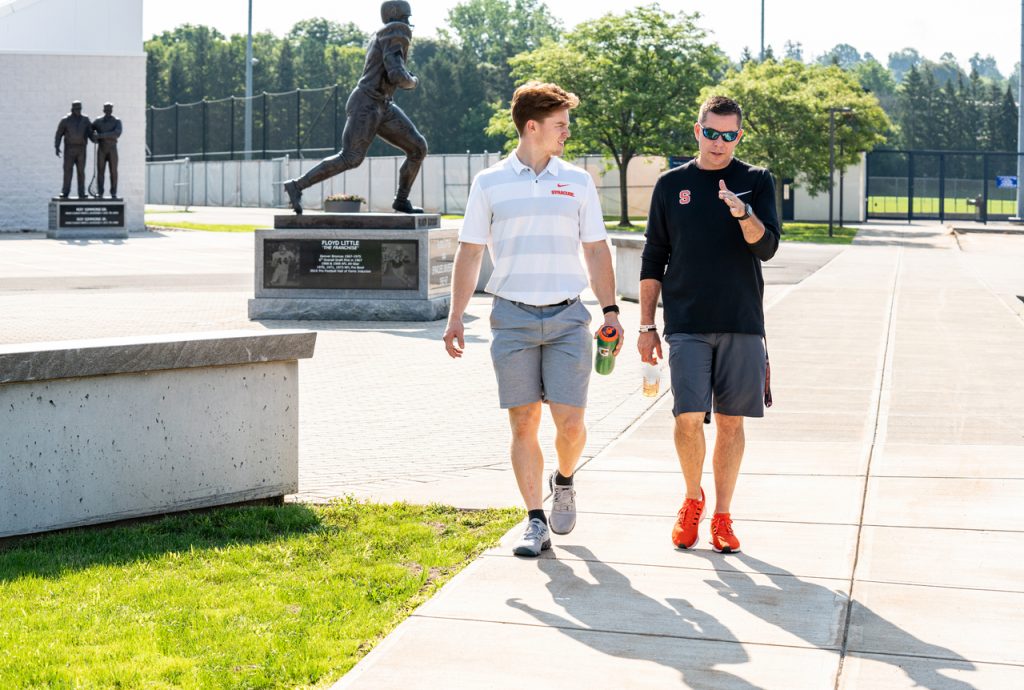 During his two-week job shadow in mid-July, McKean observed Pike and his staff as they worked with football players recovering from injuries. He also shadowed the strength and conditioning coaches as they ran players through various drills. The players weren’t practicing yet because practice did not officially start until early August.

“The nice thing about this is, because of his interest, he’s getting to see the strength and conditioning coaches work the guys conditioning-wise, so he gets observation with that along with what we’re doing (with injuries),” Pike says. “So it’s a win-win, and it’s probably better that he was here in July rather than just coming in to watch football practice.”

McKean’s journey from Fort Drum to Syracuse University started at FDRHPO, which has collaborated with Syracuse University’s Institute for Veterans and Military Families (IVMF) on other projects. FDRHPO created a program called Health Career Army Pathways Program (HCAPP), which mentors outgoing soldiers who are interested in careers in health care.

Unlike most military posts, Fort Drum does not have a hospital on base. FDRHPO is a civilian, not-for-profit agency that was formed to ensure that health care services are available to the combined 30,000 military members and beneficiaries at Fort Drum through partnerships with Northern New York hospitals and healthcare organizations.

HCAPP fits into FDRHPO’s mission to ensure there are enough health care professionals in place to meet the demands at Fort Drum, where there is a high volume of health referrals to off-post hospitals in the community each month for issues ranging from births to orthopedic injuries to behavioral health.

“The concept is twofold, especially up here in the North Country and even in Syracuse where it’s hard to recruit and retain health professionals,” says Ian Francis, a practice transformation specialist at FDRHPO who works with HCAPP. “Part of the program is to try to get them interested in filling positions here in our geographical area.”

McKean, who’ll be leaving the Army in December, is part of HCAPP’s third group of outgoing soldiers. Funded by the Mother Cabrini Health Foundation, HCAPP is a free, 13-week program for soldiers and their spouses that involves resumes, cover letters, education opportunities, career mapping and job shadowing. Joanna Habermann, who serves as installation program manager for the IVMF-led Onward to Opportunity-Veteran Career Transition Program at Fort Drum, has been a guest speaker for the first three HCAPP groups.

Francis, who spent 24 years as a medic in the Army and retired in 2014 as a musculoskeletal practice manager, says every active-duty soldier goes through a transition assistance program. But Francis says that program, which includes sessions such as a half-day class in resume writing, doesn’t address all the soldier’s needs.

“No one has taught them how to write resumes, or how to explain how their military experience translates to the public sector,” Francis says. “If you want to get certified as a strength and conditioning coach, you will want to research colleges based on how many graduating from that college have a first-time pass on certification exams, and which (colleges) will leave them with a better outcome and ready to get into a job.” 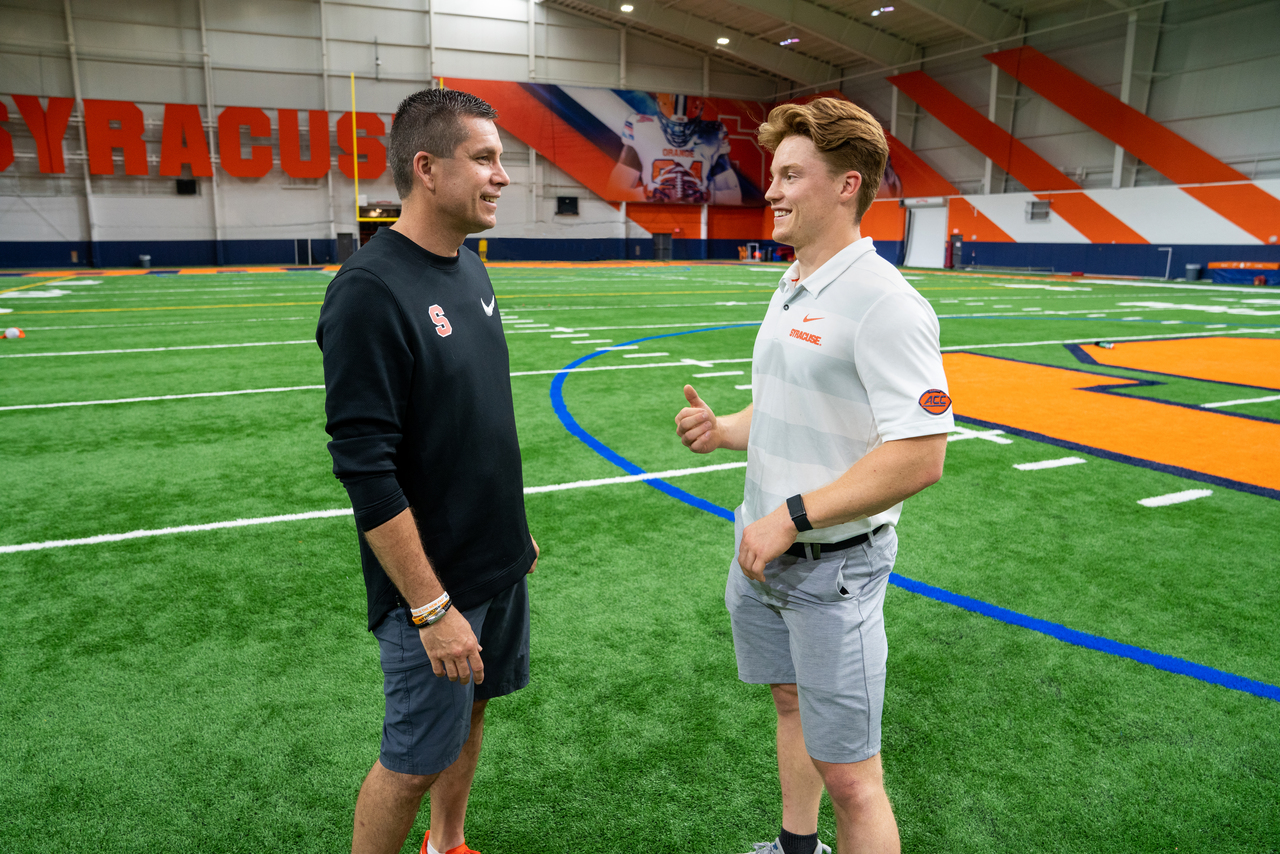 McKean says his time with Pike made him realize he’ll want to pursue a career as an athletic trainer when he leaves the Army in December.

McKean, 23, is from Louisville, Kentucky, ironically just about 70 miles away from Tim Pike’s hometown of Harrodsburg, Kentucky. McKean, who played football and rugby in high school, wasn’t sure if he wanted to attend college. Instead, he entered the service and, in the spring of 2020, spent three months in Afghanistan conducting patrols around villages.

While shadowing Pike, McKean says he was surprised by all the techniques and equipment Pike’s staff uses to help the student-athletes recover and rehabilitate from injuries.

“It’s been very eye-opening and definitely helpful for my career, and everyone has been nice and helpful in trying to explain everything that they have and how they use it,” McKean says. “No one has had a bad attitude about it.”

When asked about his biggest takeaway from the experience, McKean says it’s the understanding that a trainer must be aware that every athlete has a different tolerance to the recovery and rehab options that are available.

“There’s not one certain way to do it,” McKean says. “Sometimes there’s an exercise that they show the athlete that hurts him, so they’ve got to think of something else. Everybody’s a little different and you have to adjust it between the athletes.”

“That’s great, because that would be one of the things that I would want him to hopefully see is that we’re not treating injuries, we’re treating people and they’re not a subject in a textbook that we learn about and we just apply that one technique to the person,” Pike says. “He has seen guys with similar ailments but with different approaches. An ankle sprain for an offensive lineman, for example, is probably going to be treated different than one with a receiver.”

For his next step, McKean says he’s looking at the University of Colorado (he loves to snowboard) and will likely join the Army National Guard unit in nearby in Wyoming. His undergraduate and graduate programs will be paid for through the Army, and perhaps he will one day reunite with Pike at Syracuse when he has his degrees and certifications.

“Talking to the new trainers here, they’ve let me know exactly what it’ll take to get to this level,” McKean says. “I’m very fortunate to be in this program.”