With help from the Syracuse University and greater communities, a rehabilitated red-tailed hawk was released back into the wild to rejoin its family on July 15. 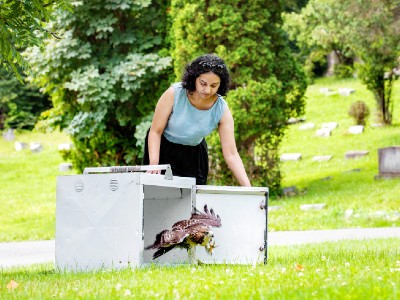 Red-tailed hawk Ayla is released back into the wild by Tripti Bhattacharya, Thonis Family Professor: Paleoclimate Dynamics and assistant professor of earth and environmental sciences in the College of Arts and Sciences. Bhattacharya found the injured bird outside the Heroy Geology building on July 5.

Juvenile A is the first of two chicks that hatched this year in the red-tailed hawk nest on Lyman Hall. The bird fledged (flew out of the nest) on June 16 at 50 days of age. He was found on the ground by Tripti Bhattacharya, Thonis Family Professor: Paleoclimate Dynamics and assistant professor of earth and environmental sciences in the College of Arts and Sciences, on July 5, unable to fly after a window strike at the Heroy Geology Laboratory.

The Department of Public Safety contacted Syracuse University alumna and donor Anne Marie Patti Higgins ’76, G’90, who along with DeAnn Buss and wildlife rehabilitator Cindy Page assessed the bird’s injury. The trio decided that taking the bird to the Janet Swanson Wildlife Hospital at Cornell University in Ithaca, New York, for treatment was the best course of action. The bird spent six days at the hospital and was treated for a shoulder injury.

After discharge, Page tested the bird’s flight to confirm he was ready for release back into the wild. The bird was released at Oakwood Cemetery, where he was reunited with his family—sibling Juvenile B and parents SU-Sue and Otto. The bird wasted no time in leaving its confines and taking flight, landing high up in a tree.

Page says the quick action by members of the Syracuse University community to get help for the injured bird made all of the difference in the happy outcome. “If he had not been cared for in the time that he was, he may have died in the interim,” she says. “He wouldn’t have had rest and the time he needed to recuperate.” 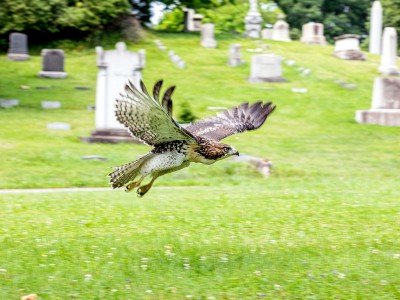 SU-Sue and Otto have nested at Syracuse University since 2012. Their year-round hunting territory covers Syracuse University and the adjacent campus of SUNY College of Environmental Science and Forestry, the nearby Oakwood and Morningside cemeteries, Thornden Park and neighborhoods close to the University.

Higgins gave the rescued bird the name Ayla, which means oak tree, and his sibling’s name is Birch. “We always use symbolism to name the birds, and this year is trees because the parents bring different kinds of tree twigs to the nests to keep it clean. They brought both oak and birch twigs that have antibacterial and antiparasitic properties to sanitize the nest and protect the chicks,” she says.

Members of the community can keep up with SU-Sue and Otto and family through the College of Arts and Sciences’ red-tailed hawk nest cam that livestreams during the March through June nesting season. The camera was funded through a generous donation from Higgins in loving memory of her husband, the Hon. Thomas W. Higgins Jr. L’67, who passed away in November 2009. The couple were avid bird watchers and hawks were their favorite raptor. “Their symbolism is being messengers from the spirit world,” Higgins says. “It’s pretty wonderful.”