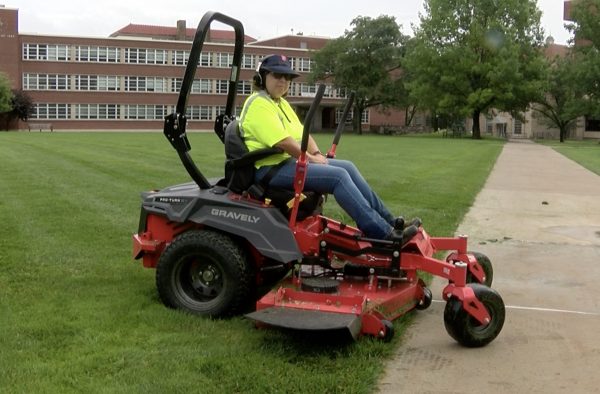 It’s one of the sounds of summer: a gas-powered lawnmower. The noise is quite common in neighborhoods as people work to keep their lawns looking good. It’s no different on the Syracuse University campus. With 800 acres of grounds, cutting the grass comes with the territory. But the noise and pollution created by gas-burning engines is soon becoming a thing of the past on campus, as grounds crews transition from gas-powered equipment to electric. Included in this grouping is the use of a zero-turn commercial grade mower with a 60-inch cutting deck, powered not by gas, but rather, four large batteries.

“It does pretty much the same thing as a gas-powered mower, except with a lot less noise, less maintenance and the fact it uses no fossil fuels,” says grounds manager Pat Carroll, who explains the technology and power of the new electric mowers far outweighs that of the old. Plus, he says, “our grounds crews appreciate the fact that their clothing doesn’t reek of gas fumes.”

The side benefit of course is the softer nature of the machines. When the blades are turning, it still sounds like a mower, but with a softer whir of the engine. And when the blades are off, it moves silently across campus. It will make the quad and the rest of campus grounds quieter by about a third, according to some estimates.

From a bigger picture, the use of electric-powered equipment is another step in fulfilling the University’s commitment toward carbon neutrality.

According to Sustainability Coordinator Melissa Cadwell, the zero turn mower “will be used approximately 20 hours per week, for 22 weeks per year, and will mitigate roughly 1,446lbs of carbon per year. And this is just for one piece of equipment. There are more, but this is the biggest by far.”  The mower was funded through Sustainability Management’s carbon neutrality fund used for projects that promote and/or lower the campus’s carbon emissions.


“Sustainability Management’s goal is to continue to help support Grounds with converting traditional lawn equipment to electric equipment, which will lower our carbon emissions and sound pollution,” said Cadwell.

So keep watch for the new electric equipment on campus. It’s more likely you’ll see it than hear it.