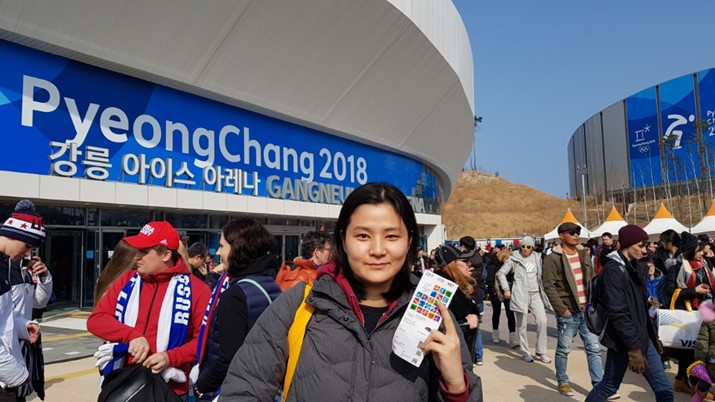 Jamie Jeeyoon Kim, an assistant professor of sport management, at the 2018 Olympics in PyeongChang

The Tokyo Olympics will have a different vibe from other games. No fans in the stands will make for quiet venues. And what impact might that have on drawing young viewers into watching the games and participating in sports in general?

For the 2018 Olympics in PyeongChang, Jamie Jeeyoon Kim, an assistant professor of sport management in the David B. Falk College of Sport and Human Dynamics, researched how young people were drawn into watching the games and more importantly whether they were then motivated to participate in sports—always a primary interest for host countries and those involved in the Olympic movement.

Kim has a deep background in the Olympics beyond her research. Before coming to academia, she used to work for the Korean Olympic Committee, assisting Korea’s successful bid for the 2018 PyeongChang Winter Olympics and serving as a manager of the Korean national team.

For the 2018 Olympics, the PyeongChang Organizing Committee’s “New Horizons” vision was to expand winter sports in Asia, bolstered by what some in the sports industry described as the youngest and fastest-growing winter sports market in the world with the largest aggregate youth population.

To better understand the impact of the games and develop strategies for drawing in young people, Kim was awarded $18,000 as part of the International Olympic Committee’s advanced Olympic research grant for her project, “Building a Sport Participation Legacy Through the 2018 Winter Olympic Games.”

Through her work, Kim says that “social influence was found as the most influential factor in the Asian younger generations’ decision-making for Olympic consumption.” In Japan, that element might be missing at the upcoming games—as it will be hard to show how people are missing out from an experience when no one is in the stands.

Kim also received a $7,500 Falk College Seed Grant for the project, “Building Korea’s Brand Personality and Equity with the Olympic Brand and the 2018 PyeongChang Winter Olympics,” looking at the nation branding effects of hosting the Olympic games.

In this Q&A, Kim answers a few questions about her research on the legacy of sport participation from the Olympics, her longstanding connection with the Olympics and the thrill of the games.

Q: What did your research involve regarding your project on “Building a Sport Participation Legacy Through the 2018 Winter Olympic Games”?

A: As reflected in the vision of “New Horizons,” the primary goal of the 2018 PyeongChang Winter Olympics was to boost sport participation and spectatorship among younger generations in the Asian market through the “trickle-down effect” (i.e., watching the Olympics will inspire people to watch and play sport).

Based on “negotiation of motives and constraints,” a project identifying and testing the interaction among and assessing pre-post changes of key internal and external motives and intrapersonal, interpersonal and structural constraints was conducted with late adolescents in Korea and China. The project was funded by the 2017-2018 Advanced Olympic Research Grant from the International Olympic Committee’s Olympics Studies Centre.

The scarcity of the event—being held every four years and the rare opportunity to attend—altered how certain factors affected sport participation and spectatorship (e.g., lack of knowledge about a sport is usually a constraint but functioned as a motive in the study).

Additionally, the exposure to the 2018 games brought short-term boosts of Asian younger generations’ intentions for Olympic sport participation and spectating.

Q: What outcomes were there that might be applied to other Olympics, including these upcoming summer games? How do you see the lack of in-person fans at the upcoming Olympics as impacting sport participation?

A: Among the motives and constraints, social influence was found as the most influential factor in the Asian younger generations’ decision-making for Olympic consumption. Social influence—being influenced by friends or family or to follow the trend—is a factor similar to the “fear 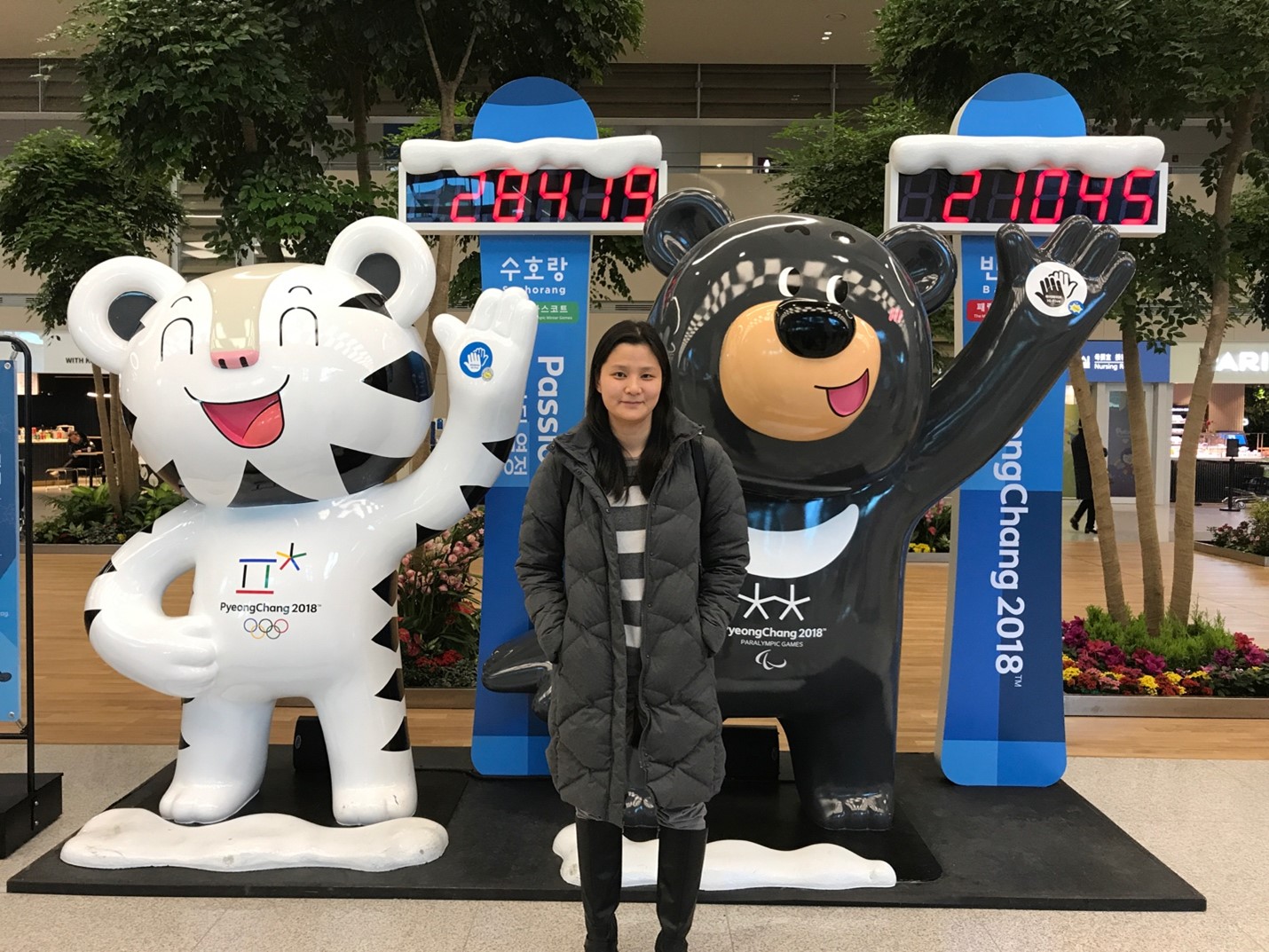 Jamie Jeeyoon Kim, an assistant professor of sport management, at the 2018 Olympics in PyeongChang

of missing out” that can be an influential motive as well as a moderator facilitating one’s overcoming of constraints.

For the Tokyo Olympics, it will be difficult to promote “social influence” among the Japanese audience, as banning in-person spectating hinders the building of the perception that “you do not want to miss out when many others are enjoying Olympic sport.” The fact that the majority of Japanese are preferring the postponement or cancellation of the games is another hindrance for forming “social influence.”

Q: What was the most satisfying part of your work serving with the 2018 PyeongChang Winter Olympics Bid Committee and Korean Olympics Committee?

A: I cannot forget the moment when “PyeongChang” was announced as the host of the 2018 Winter Olympics. It was a moment of excitement and fulfillment, but I also felt relieved that the bidding process was finally over. It was one of the very few moments I’ve cried out of joy.

Attending the 2018 PyeongChang Winter Olympics was also a satisfying experience. I was able to attend the event as a researcher. Seeing the Olympic bid plan actually being realized and being able to catch up with former colleagues were great enjoyable experiences.

My experience with the Olympics helped me stay involved with the Olympic movement in a researcher capacity. I have worked in a research consortium developing a bid strategy for the 2032 Seoul Summer Olympics and a legacy education program for the 2024 Gangwon Winter Youth Olympics. I also am working with the Caribbean Association of National Olympic Committees (NOCs) and its 29 member NOCs on a project about NOC sponsorship. Being able to conduct research that assists practitioners and seeing it making an impact is very rewarding.

Q: What are you most looking forward to with the upcoming Olympics? What is your favorite sport to watch?

A: The IOC allows organizing committees to add certain sports to the Olympic program. For Tokyo, baseball/softball, karate, skateboarding, surfing and sport climbing will be added. These sports were strategically selected to appeal to the younger generation and the host country residents.

Personally, I am excited about skateboarding, surfing and sport climbing as they make their debut at the Olympic stage. These sports are dynamic, energetic and fast-paced, and I believe the sports will bring more excitement and attract more of a younger generation to watch the Olympics.

My favorite sport to watch is not in the summer program. It is short-track speed skating in the Winter Olympics. I like the sport as it is one of the most fast-paced sports, very competitive and always nail-biting. As the former team manager of the Korean national team, the fact that Korea has been pretty successful in the sport did affect my preference of the sport.