Like many 2019 graduates, Nathan Shearn’s plans were disrupted when the COVID-19 pandemic hit. 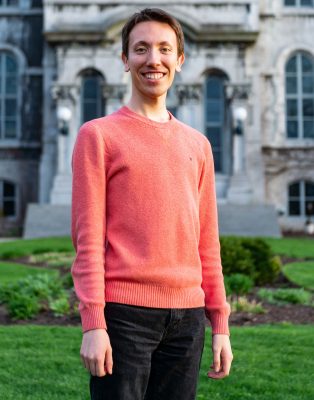 After earning his bachelor’s degree in anthropology from the College of Arts and Sciences and the Maxwell School and graduating with honors from the Renée Crown University Honors Program, he received a Fulbright Teaching Assistantship to teach English in Belarus. Unfortunately, as a result of the pandemic, the Fulbright program in Belarus was suspended and he was furloughed from his temporary job in his hometown of Buffalo.

Instead of giving up on his dream of teaching English abroad, Shearn started to think creatively. “I reached out to one of my contacts at the State Department, who I met during Fulbright orientation, and asked them if there were any job opportunities at the United States Embassy in Minsk, Belarus. I was able to make contact with someone at the embassy who suggested I teach some virtual classes,” he said. With a grant from the embassy and an affiliation with Minsk State Linguistic University, he gave three workshops a week with teachers and university professors on topics such as cultural diversity, learning styles and strategies, the U.S. educational system and classroom games and activities. He also led eight different classes each week with secondary school  pre-college students in seven different Belarusian cities, covering cultural knowledge of the United States, such as music, food, art, politics, sports and current events.

“Even in the virtual format, by the end, I really connected with a lot of the students. I learned their personalities and their classmates. It was a really great experience,” Shearn says.

As the pandemic wound down, Shearn hoped he would get to Belarus after all, but the ongoing political turmoil in the country made that impossible. So he took the Fulbright program up on an offer to be reassigned for the 2021-2022 academic year.  “I’m planning to go to graduate school to earn my Ph.D. in anthropology, so waiting another year wasn’t really appealing,” he says. “A few weeks later, I got an email to interview with Fulbright’s program in Bulgaria and was accepted.”

“Nathan’s persistence, creativity and adaptability in the face of obstacles are precisely the qualities that made him a strong Fulbright candidate and that will ensure his success during his Fulbright placement in Bulgaria,” says Jolynn Parker, director of the Center for Fellowship and Scholarship Advising.” We’re thrilled that he will have this opportunity for an in-person teaching experience and know that he will be a wonderful representative of Syracuse University and the United States.”

As he learned more about Bulgaria, Shearn became more interested in experiencing the culture. He will be teaching in Kardzhali, a town in the southern part of the country with a large population of ethnic Turks. “I’m really interested in issues of migration and mobility. Bulgaria is a really interesting place because, historically, it’s been a crossroads of many different peoples and cultures,” he says. “Today, the country is experiencing new migration flows as more people fleeing violence and unrest in the Middle East make their way through the Balkans and many Bulgarians are looking for economic opportunities outside the country. These dynamics create interesting social and demographic changes both inside Bulgaria and beyond.”

While he won’t be doing any formal research during his Fulbright experience, Shearn says he is looking forward to learning more about the language and people, “I am looking forward to being immersed in a new culture and talking to Bulgarians about their lives. I think my Ph.D. work will be richer because I will have been exposed to different perspectives that are rooted in the history and cultures of the region.”