The S.I. Newhouse School of Public Communications announced earlier this month the winners in the 2021 Mirror Awards competition for excellence in media industry reporting. 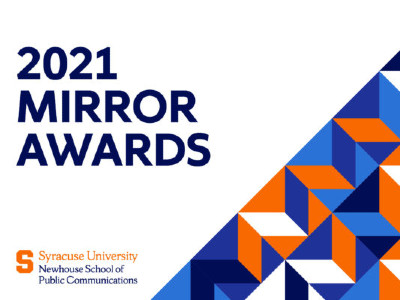 Chosen from by a group of journalists and journalism educators, the winners are:

“Is Biden’s Stutter Being Mistaken for ‘Cognitive Decline’?”

“Will This Racial Reckoning Finally Force Newsrooms to Listen to Every Staffer’s Voice?”

“What Happens When the News Is Gone?”

“How Zello Became A Recruitment & Organizing Tool for the Far Right”

On the Media Produced by WNYC Studios

Best Story on Media Coverage of the COVID-19 Pandemic

Best Story on Media Coverage of the 2020 Presidential Election

“Without a Campaign to Cover, Reporters Shift to Covering the Voting Process Itself”

The Mirror Awards are the most important awards for recognizing excellence in media industry reporting. Established by the Newhouse School in 2006, the awards honor the reporters, editors and teams of writers who hold a mirror to their own industry for the public’s benefit. For information about the awards, visit newhouse.syr.edu/mirrorawards or email mirrorawards@syr.edu.