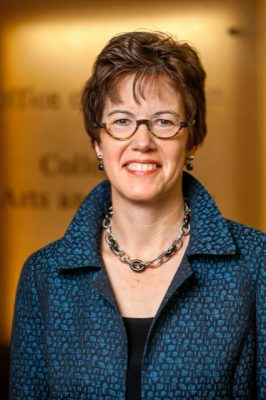 The global search for Syracuse University’s next vice chancellor, provost and chief academic officer has culminated with the selection of Gretchen Ritter, a highly respected and dynamic academic administrator who has held leadership roles at some of the country’s most prominent institutions of higher education. Ritter, currently executive dean and vice provost for The Ohio State University College of Arts and Sciences, will assume her new role on Oct. 1. Her appointment was approved by the Executive Committee of the Board of Trustees and endorsed by the search committee charged with identifying the finalists for this critically important position.

“Gretchen’s track record of success as an academic leader, educator, researcher and writer will allow her to make an immediate impact on Syracuse University’s research and academic enterprise,” says Kent Syverud, chancellor and president of Syracuse University. “As a prolific social scientist, Gretchen is inspiring as is her academic work on contemporary issues facing our society. Her contributions will elevate Syracuse University’s global standing as a preeminent research institution.”

As executive dean and vice provost at Ohio State’s College of Arts and Sciences, Ritter is responsible for the academic success and research excellence of more than 17,000 undergraduate students, 2,300 graduate students and 1,300 faculty. Ritter oversees 38 academic departments and schools, more than 20 centers and institutes, and more than 80 major programs. Under her leadership, the college provides approximately half of all credit hours on the Columbus campus across the arts, humanities, and social, behavioral, natural and mathematical sciences. During her tenure at Ohio State, Ritter helped to lead the development of the universitywide Race, Inclusion, and Social Equity (RAISE) proposal announced in February; revamped the theatre department into the Department of Theatre, Film and Media Arts; restructured the office of undergraduate education; secured the single largest individual donation the college has ever received; and expanded support for sponsored research. This role, Ritter says, combined with her nearly 30 years of experience in higher education, has prepared her for this opportunity.

“New York is home to me and has played such a profound role in shaping my life—both personally and professionally,” says Ritter. “To have the opportunity to serve in leadership alongside Chancellor Syverud at one of the most prestigious universities in my home state is truly a dream come to fruition. I look forward to working with faculty, leadership, students and staff at a time when Syracuse University is poised to achieve even higher levels of excellence.”

Prior to joining Ohio State, Ritter served as the Harold Tanner Dean of Cornell University’s College of Arts and Sciences, the university’s largest college, from 2013-18. As the college’s first female dean, Ritter provided strategic vision and oversight for 28 academic departments, more than 500 tenured and tenure-track faculty, 5,600 students and an annual budget exceeding $400 million. During her time at Cornell, Ritter increased the diversity of faculty and the undergraduate student body; appointed more women and faculty of color to leadership positions; created new support programs for first-generation students; expanded research and travel funding for humanities faculty; created, in partnership with the College of Engineering, the Cornell Neurotech Program; oversaw the creation of a one-credit freshman advising seminar; helped endow the Center for the Study of Inequality; revised tenure and promotion procedures; and established newly endowed professorships and department chair and program director positions.

Jamie Winders, professor of geography in the Maxwell School of Citizenship and Public Affairs, chaired the search committee and says Ritter is an exceptional choice because of her experience, record of achievement and philosophical approach to academic leadership.

“We were charged with finding a strong and visionary academic leader who was committed to supporting and strengthening all the different components of Syracuse’s research and academic missions,” says Winders. “Gretchen Ritter rose to the top of many qualified candidates. We welcome her with great enthusiasm to the Syracuse University community. I am grateful for the opportunity to have chaired the search committee and am thrilled with the result.”

Ritter also previously spent nine years at the University of Texas at Austin, serving as vice provost of undergraduate education and faculty governance, co-chair of the Gender Equity Taskforce and director of the Center for Women’s and Gender Studies. She also taught at the Massachusetts Institute of Technology (MIT), Princeton University and Harvard University.

Michael Schwartz, associate professor in the College of Law and a member of the search committee, says recruiting a candidate of Ritter’s caliber and whose scholarship is so applicable to today’s higher education landscape was especially attractive to the search committee.

“The selection of Gretchen Ritter was not difficult,” says Schwartz. “Personally, she is warm and engaging and very approachable. Professionally, she demonstrated all the qualities we were looking for in a leader who inspires others. Gretchen is a steadfast steward of shared governance whose commitment and abilities to effect positive change under challenging circumstances is demonstrated by her leadership at Ohio State and Cornell University before that. Gretchen will be a strong advocate for our faculty and our students, and push our academic and research enterprise to new heights.”

Ritter earned a bachelor’s degree in government from Cornell University and a Ph.D. in political science from MIT. She is the author or editor of three books: “The Constitution as Social Design: Gender and Civic Membership in the American Constitutional Order” (Palo Alto: Stanford University Press, 2006); “Goldbugs and Greenbacks: The Antimonopoly Tradition and the Politics of Finance in America, 1865-1896” (New York: Cambridge University Press, 1997); and “Democratization in America: A Comparative and Historical Perspective,” edited by Desmond King, Robert Lieberman, Gretchen Ritter and Laurence Whitehead, (Baltimore: Johns Hopkins University Press, 2009).

“John has been an excellent and steady academic leader during one of the most uncertain and challenging times in our university’s history,” says Chancellor Syverud. “His tenacious work ethic, strong leadership and unwavering commitment to advancing our academic and research priorities are just some of the many characteristics that allowed him to be such a successful interim provost. I am grateful to him for the many ways he elevated our academic enterprise through his leadership.”

Liu will continue to serve as interim vice chancellor and provost until Ritter’s appointment begins.

Dear Students, Faculty and Staff: I had hoped my first communication with the campus community would be to share positive news. Sadly though, I am writing with the most difficult news to share—the passing of one of our students. We…

Students to Present Research During SOURCE Summer Symposium Aug. 10 and 11

John Wildhack, director of Athletics at Syracuse University, today announced Vonn Read, currently associate head coach, will serve as acting head coach for the 2021-22 basketball season. “I am grateful to Vonn for stepping up to lead,” says Wildhack. “With…

Dear Students, Faculty, Staff and Families: Late yesterday afternoon, the U.S. Centers for Disease Control and Prevention (CDC) identified Onondaga County as a region of substantial transmission due to an increase in confirmed COVID-19 cases. In response, a short time…

The University has accepted Coach Quentin Hillsman’s resignation. Coach Hillsman and I agreed that parting ways is in the best interest of the University, the program and our student-athletes. We wish him and his family all the best. Interim leadership…