For many years, College of Engineering and Computer Science Dean Emeritus Bradley Strait ’58, G’60, G’65 led the academic procession at Syracuse University’s annual Commencement as the mace bearer. The mace bearer is a role that recognizes the importance of the University’s mission as an educational institution. It was also a role that symbolized Strait’s relationship of more than 60 years with the College of Engineering and Computer Science, helping lead students, faculty, research and academic programs forward.

“Brad exemplified what it means to be Orange. I do not know anyone else who commanded such complete respect across campus than he did,” says Shiu-Kai Chin ’75, G’78, G’86, professor of electrical engineering and computer science. 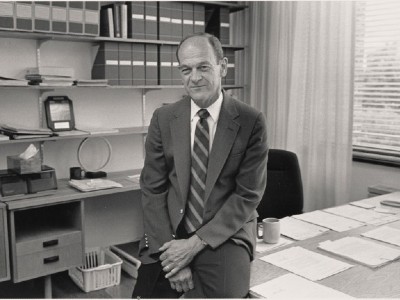 Strait passed away in his hometown of Canandaigua, New York, on May 6. He leaves behind an unparalleled legacy as a student, professor and as dean of the college from 1981-1984 and again from 1989-1992.

He came to Syracuse University after serving in the U.S. Navy from 1951-1955 as an electronics technician. After being discharged, Strait studied electrical engineering. Syracuse University Life Trustee Charles Beach ’58, G’67 was his roommate and fraternity brother in Phi Gamma Delta. They remained close friends for the next 67 years.

“He really bled Orange. He loved Syracuse University, he loved teaching and he loved his students,” says Beach.

While he was an undergraduate student, Strait met Nancy Brown, who was a student in the University’s College of Fine Arts. Brad and Nancy married in 1957 and graduated in 1958. They moved to the Syracuse suburb of Jamesville, where they raised their children, Andy and Martha. Brad and Nancy later established the Jamesville Museum which collected important pieces of the town’s history and memories of its neighbors.

After graduation, Strait worked briefly at Eastman Kodak before returning to Syracuse for a master’s degree and his doctorate. He then became a faculty member known for taking extra time to work with students and young researchers and making sure they were successful in all aspects of their life, not just the classroom.

He was a member of the University’s world-renowned electromagnetics research group and became chair of the then electrical and computer engineering department in 1974. One of his early hires was current electrical engineering and computer science Distinguished Professor Pramod K. Varshney.

“Brad did a marvelous job in his role as the leader of a premier department,” says Varshney. “As department chair, he established a close relationship with the Rome Air Development Center (now Air Force Research Laboratory) resulting in significant research funded by US Air Force at Syracuse University.”

“Brad was my first academic advisor when I came to SU in the fall of 1971. He remained a near and dear mentor throughout my academic career,” says Chin. “His advice to me was always straightforward and direct. Always do what is best for the academic program, always teach a course even if you are in a leadership role and remember that the people you see on the way up are the same people you see on the way down.”

Strait went on to serve as the dean of the College of Engineering and Computer Science from 1981-1984 and 1989-1992. He was a relentless advocate and recruiter for Syracuse University, always looking to bring the best students and faculty to Central New York.

“Brad was one of the main reasons why I came to Syracuse University as a faculty member,” says Ed Bogucz, associate professor of mechanical and aerospace engineering. “Brad’s personality was a big factor.”

“Many of the players, including myself, were young people who looked at Brad as a role model of how to live an active and fulfilling life balancing family, employment, faith and active recreation,” says Alan Levy, professor of mechanical and aerospace engineering. “On the court Brad was a fierce competitor and, like all of us, he liked to win. But he was gracious in victory and defeat. Brad played in the game until he was about 80, and he never lost his spark racing up and down that full court.”

Strait took pride in building connections across the University through softball games played against other colleges and departments.

“A lot of relationships were cemented by getting to know people during those games,” says Beach.

Always looking forward, Strait expanded collaborations with industry partners and worked to connect them with current research activity at Syracuse University. During his tenure as dean, New York State designed the Centers of Advanced Technology (CAT) program and under Strait’s leadership, the University received one of the six CATS. To make sure the center got off the ground, he left his role as dean position and became the founding director of the Computer Applications and Software Engineering Center (CASE).

“He was instrumental in getting state funds to build the Center for Science and Technology (CST). Without his vision of CASE and his leadership, CST would not be built,” says Varshney. “CASE continues to flourish even today as a preeminent center that champions economic growth in New York State via its outstanding research activities.”

“When I became dean, I developed the concept for the Syracuse Center of Excellence following the approach that Brad had pioneered for the CASE Center,” says Bogucz.

Strait retired but always remained an active member of the college family, serving as dean emeritus. He and Nancy also established the Bradley J. and Nancy B. Strait Scholarship to assist future generations of Syracuse University students.

He leaves behind a legacy of supporting and mentoring generations of young engineers and computer scientists. During a devoted life of service to Syracuse University, he provided guidance and encouragement at a crucial point in countless lives.

“I am forever blessed because he was part of my life. Those of us who are left must do our best to help the others who come after us like Brad did,” says Chin “Every time I am in the Stadium during Commencement, I can still see Brad faithfully leading the procession as mace bearer, guiding us to where we need to be.”

A memorial service for Strait will be held on Thursday, June 17, at 5 p.m. in Hendricks Chapel. A livestream of the event will be available.