Robert Congel: A Visionary Who Transformed the Region and Served the University 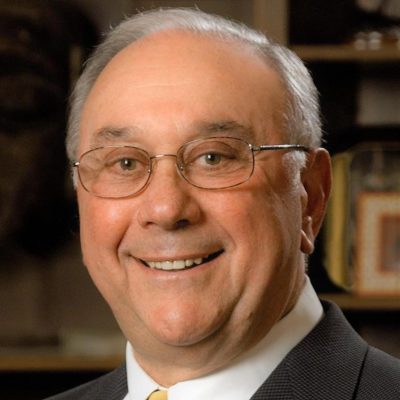 The Wall Street Journal paid tribute to the late Robert J. Congel, Syracuse University Trustee, as an entrepreneur who “pursued towering ambitions.” It was a reference not just to the buildings that marked his expansive footprint, but to the innovative visionary whose real estate ambitions were designed to improve lives. He was the driving force behind one of the biggest shopping malls in the nation, aptly named Destiny USA, bringing millions of visitors and shoppers to the city he fiercely loved.

“Bob brought that same drive, energy and passion for the City of Syracuse to his work as a trustee,” says Board Chair Kathy Walters ’73. “He was a tremendous advocate for the University, with a deep understanding of the inextricable link between the success of our students, faculty and staff, and the strength of this entire region.”

A lifelong resident of Central New York, Bob was born in 1935. His family was involved in construction and real estate development and it was a $175 loan from his beloved grandfather that helped him start a construction company that evolved into today’s Pyramid Management Group, the largest privately held shopping mall developer in the Northeast. Pyramid, which owns, leases and operates properties throughout New York and Massachusetts, combines traditional retail with dining and entertainment to transform the shopping experience.

“Though the Congel name is perhaps most associated with buildings and expansive structures, Bob himself was a people person and never lost sight of how real estate development could impact and improve people’s lives,” says Chancellor Kent Syverud. “From employing countless students and others over decades in the retail world, to helping make Syracuse a destination city, his impact is immense.”

Pyramid is recognized as an industry leader on multiple fronts, one of the first developers to incorporate dining, entertainment and retail under one roof with its Palisades Center “ThEATery” concept in 1998; the first to successfully integrate big-box retailers like Target and Home Depot with such traditional retailers as Macy’s and Lord & Taylor inside an enclosed shopping center; and, recently, announcing the first Amazon 4-Star store in the Pyramid portfolio opening at the Crossgates complex in Albany, bringing together the online marketplace with brick and mortar retail.

Congel was recognized as a civic leader who was always working to improve the city. He served on the Board of Trustees of Christian Brothers Academy, the Board of Commissioners of the Syracuse Housing Authority, the Metropolitan Development Association, the Greater Syracuse Chamber of Commerce, Fays Drug Company and Unity Mutual Life Insurance Company. He was a 1989 recipient of the Simon Le Moyne Medal from Le Moyne College, having served on its Board of Trustees.

He was honored by the Longhouse Council of the Boy Scouts of America, the Syracuse Women’s Federation, the Environmental Protection Agency, Greening USA, the U.S. Green Building Council and the American Cancer Society. He received the Onondaga Historical Association Medal and the Rhea Eckel Clark Memorial Citizenship Award from the Central New York Regional Planning and Development Board.

A third-generation Italian American, Congel attended Christian Brothers Academy (Class of 1954) and Fordham University (Class of 1958). He was deeply proud of his roots and connections to this region and community, enjoying Skaneateles Lake in the summer and skiing in the winter with his five children and 21 grandchildren. He is survived by his wife Suzanne, their children Beth Ulrich, Scott Congel, Mark Congel, Sheila Goetzmann and Stephen Congel, and numerous grandchildren, including granddaughters Rebecca C. Congel ’17 (David B. Falk College of Sport and Human Dynamics) and Jaedyn K. Congel ’23 (College of Arts and Sciences).