Through Poetry, Nidaa Aljabbarin ’22 Shares Her Personal Journey as a Syrian Refugee 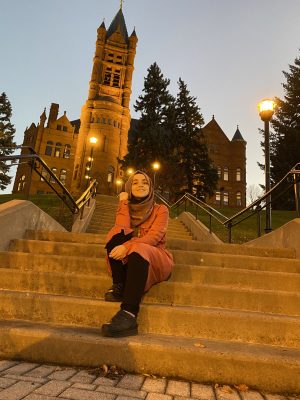 When Nidaa Aljabbarin ’22 stepped into her first Narratio Fellowship workshop at the North Side Learning Center in Syracuse in 2019, she never imagined that it would lead to her becoming a published poet with her work being read by millions around the world. Until that point, she had never shared her journey as a Syrian refugee or expressed her feelings about what it is like to be displaced. But soon after meeting Ahmed Badr, an author, social entrepreneur, former Iraqi refugee and co-founder of the Narratio Fellowship, she was inspired to tell the world about her life experiences.

“I wanted to share my story,” says Aljabbarin, who left Syria in 2013 for Jordan before emigrating to the United States in 2016 with her parents and eight siblings. “I wanted to share a part of me that the world can hear and give them an idea of what being a refugee means and what I went through.”

As a teen, Ahmed Badr founded Narratio, an organization and online platform that supports and highlights the creative expression of displaced young people through fellowships, workshops, publishing and partnerships. He and Brice Nordquist, Dean’s Professor of Community Engagement in the College of Arts and Sciences (A&S), founded the Narratio Fellowship in 2019.

The annual intensive storytelling and leadership program provides resettled refugee youth in Syracuse, like Aljabbarin, with the tools and resources to share their own histories and experiences through artistic expression.

Aljabbarin, a junior majoring in biology in A&S, was among the first cohort of Narratio Fellows. Badr and Nordquist organized workshops for the fellows to learn about storytelling through media, including film, short stories, podcasts and poetry. The 2019 class of fellows collectively chose poetry to share their histories.

Aljabbarin’s poem, “The Day I Left,” is an illustrative look into her family’s final day at their home in Syria. The idea for her poem emanated from a workshop where fellows selected an object from the Metropolitan Museum of Art’s Ancient Near East Collection as inspiration to represent their personal experience as a refugee.

“I came across a vase during my research that reminded me of my country, and how we used to decorate,” says Aljabbarin. “The houses were full of vases and it took me back to the last day I was there when we had to empty the whole house before we left.” The object, titled “Vessel,” is a bronze cast vase believed to be from Iran during the period of third century B.C. to first century A.D.

She begins her poem by recounting the painful emotions felt on that day, “Oh grandfather, our house key is lost, and the doors cry for those who have left…” She goes on to describe how her family left home not knowing if they would ever return. As she walked out of the house for the final time, she caught a glimpse of a solitary vase—the last item remaining in their empty dwelling.

Her poem was published in Badr’s book, “While the Earth Sleeps We Travel,” a collection of poetry, personal narratives and art from refugee youth around the world, including in Syracuse. Badr says that Aljabbarin’s poem illustrates how creative expression through poetry can evoke an emotional response and unite readers from different backgrounds.

“’The Day I Left’ offers a powerful glimpse into what is possible when we tell our own stories on our own terms,” says Badr. “Nidaa’s words are a beautiful testament to her and her family’s resilience; the poem powerfully marks their journey in a way that resonates across various local, national and international audiences.”

Reaching the Hearts of Millions 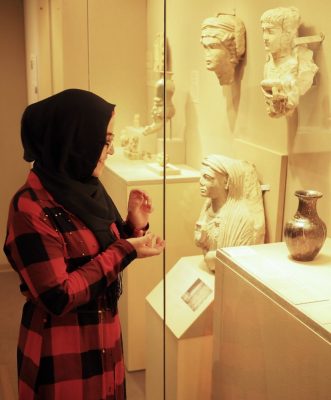 Nidaa Aljabbarin at the Metropolitan Museum of Art viewing the vase that inspired her poem.

In addition to having her work published in Badr’s internationally-acclaimed book, Aljabbarin also read her poem to an audience at the Metropolitan Museum of Art during the Narratio Fellows’ trip to New York City in 2019. During that visit to the Met, she was able to view first-hand the vase that inspired her poem.

“The Day I Left” has attracted attention from readers around the world and even received praise from a famous Hollywood actor. Ben Stiller, who is a United Nations High Commissioner for Refugees Goodwill Ambassador, wrote the forward for “While the Earth Sleeps We Travel.” Aljabbarin spoke with Stiller during a virtual Zoom session last year and read him her poem during that meeting.

Aljabbarin’s work was also featured in an article by The National, an international news organization with readership in the millions. Referencing her poem, the journalist said, “The poem is honest, pictorial and sharp. And there are few such works in the book that will leave the reader with that nostalgic sense of a home left behind.”

Aljabbarin says she was also contacted by a representative from Carry the Future, an organization providing aid to refugee families, who read her poem and requested that she become a board member and lead projects assisting refugee families in Syracuse.

While you might imagine that literary success at such a young age might draw Aljabbarin into a career as a writer, a rare disease that hit close to home has motivated her to pursue a medical degree.

Aljabbarin hopes to one day help find a cure to a genetic disease affecting her and many of her siblings. Just before emigrating to the United States, two of her brothers contracted a mysterious illness they eventually learned was called Batten disease, which caused them to have seizures and hindered their vision and ability to speak and walk. Because of the rare illness, the family’s immigration file was expedited and the Aljabbarins received the news that they would be moving to Syracuse immediately.

While thankful that this would provide an opportunity for her brothers to receive much needed care, Nidaa admits that she was nervous about the prospect of adjusting to life in a new and unfamiliar country.

“I didn’t know what to expect when moving here,” she says. “At least I knew back in Jordan we had the same culture and the same language. But I looked forward to schooling and better medical care for my siblings available in the United States.” While she misses the culture and family that they were forced to leave behind, Aljabbarin says moving to the U.S. was the best thing that they could have done for the well-being of their family.

Soon after arriving at their new home in Syracuse, the Aljabbarins traveled to Duke University for a round of tests to find out more about the disease. The family learned that one of Aljabbarin’s younger brothers was also living with the disease, although he was not yet showing symptoms. At Duke Hospital he underwent a stem cell transplant and is currently symptom-free but awaits further examinations to find out if the transplant cured him.

Testing also revealed that Nidaa herself is a carrier of Batten disease. She says while at Duke Hospital she talked with many doctors about genetic diseases and became interested in a career in medicine. When she returned to Syracuse, she further researched Batten disease as part of an Honors-credit research project in her biology class at Onondaga Community College, where she was a student at the time. She says from that moment on she set her sights on becoming a doctor.

In spring 2020, Aljabbarin was awarded a Cooke Undergraduate Transfer Scholarship, given to 50 students nationwide each year out of around 1,500 community college applicants. The scholarship supports her studies at Syracuse University.

After she completes a bachelor’s degree in biology at Syracuse, Aljabbarin plans to attend medical school and hopes to one day provide clinical support to refugee families in need who are battling rare genetic diseases.

“I don’t want anyone else to suffer the same way my family has,” Aljabbarin says. “Not being able to help and not knowing why this is happening is extremely difficult. My goal is to be able to support families and provide them answers during those challenging times.”

Similar to the way Narratio founder Ahmed Badr inspired Aljabbarin when she was a Narratio Fellow, she aims to be a beacon of support to other refugees in Syracuse. Throughout the academic year, she has offered guidance and mentorship to this year’s cohort of Narratio Fellows, who produced autobiographical films about their experiences as displaced refugees.

“I want to help fellow refugees who are in the same place that I was,” she says. “Just like me, they all have stories hidden that the world should hear.”

While you will usually find Aljabbarin conducting research in a biology lab or studying for her next exam, she says she continues to make time to express her thoughts, feelings and dreams through poetry.

“I’ve been writing ever since my first workshop with Ahmed and I don’t expect that to change” she says. “Through the fellowship I learned that your writing doesn’t have to be perfect at first, and I tell current fellows to just express your thoughts honestly and truthfully, and a great story will emerge.”