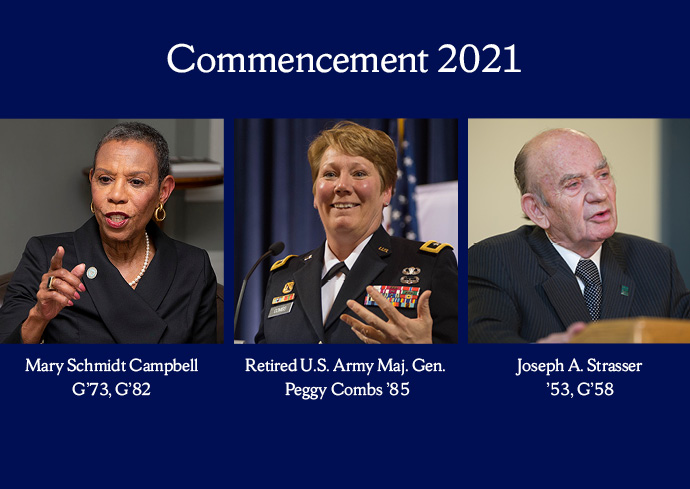 An esteemed higher education leader and a change agent for the arts; a highly respected U.S. Army commander and pioneer for women in the military; and an exemplary public servant in fiscal management and steadfast philanthropist will receive honorary degrees during Syracuse University’s 2021 Commencement.

Mary Schmidt Campbell G’73, G’82, president of Spelman College and dean emerita of the Tisch School of the Arts, New York University; Retired U.S. Army Maj. Gen. Peggy Combs ’85, former chief of staff, North American Aerospace Defense Command and U.S. Northern Command at Peterson Air Force Base, Colorado, and commanding general of Fort Knox, Kentucky; and Joseph A. Strasser ’53, G’58, retired budget officer for Savannah, Georgia, and Jacksonville, Florida, and retired finance officer in the U.S. Army, will be honored during Commencement this weekend for their extraordinary accomplishments and contributions to their professional fields and service to the betterment of the world.

Combs will be attending the Commencement ceremonies in person; Campbell and Strasser will be honored in videos at the ceremonies. 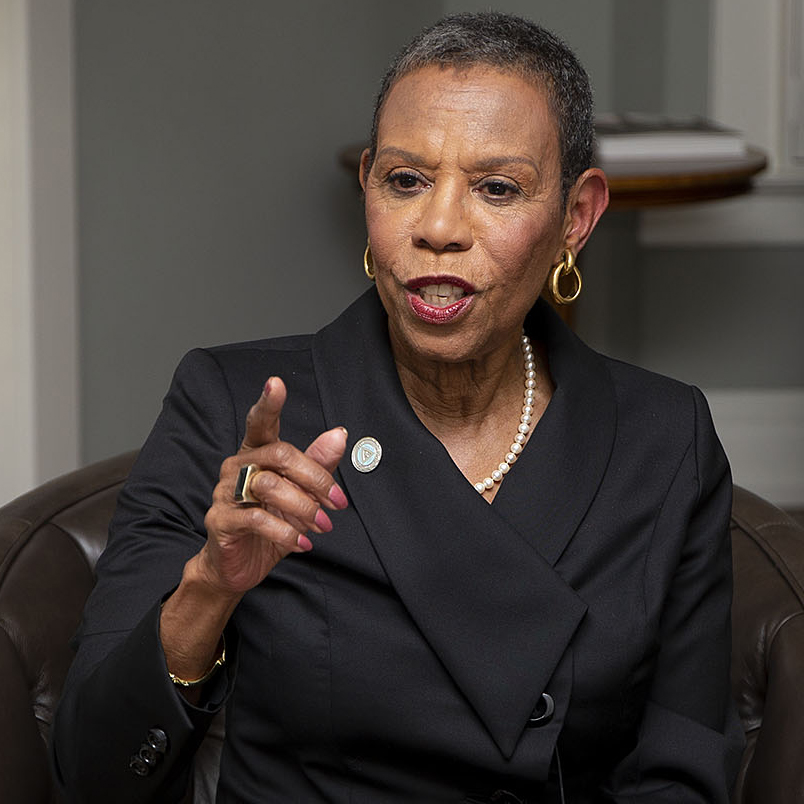 Campbell is a distinguished academic leader recognized at the highest levels, and her advocacy and passionate work in arts and humanities has expanded opportunities for women and people of color and impacted policies at both the local and national levels. She is the 10th president of Spelman College, a historically Black college, and a leading liberal arts college for women. Her prior work and leadership at the Tisch School and in government and for nonprofit organizations left an indelible mark on the arts and culture in New York City.

Campbell’s professional foray and commitment to the arts and public policy began at Syracuse University, where she became the art editor at the Syracuse New Times. Campbell, who earned a B.A. from Swarthmore College, earned an M.A. in fine arts and a Ph.D. in humanities from the College of Arts and Sciences at Syracuse University. She was assistant curator of art history at the Everson Museum of Art and one of the founders of the University’s Community Folk Art Center.

Following her time at Syracuse University, Campbell served as executive director and chief curator of the Studio Museum in Harlem. The organization was recognized as a linchpin in the economic revitalization of the 125th Street corridor and a major center for the study of the visual arts of the Black Atlantic. She was appointed New York City’s commissioner of cultural affairs in 1987, championing the need for professional development opportunities for women and people of color in the arts and a stalwart advocate for large and small arts organizations throughout New York City. She also served as the chair of the New York State Council on the Arts.

In 1991, Campbell was named dean of New York University’s Tisch School of the Arts. The school rose in distinction under her leadership, as she developed such new programs as the NYU Game Center, the Clive Davis Institute of Recorded Music, the Moving Image Archiving and Preservation Program and a joint MBA/M.F.A. Graduate Film and Business program. At the same time, she helped increase the diversity of both the student body and the faculty from underrepresented groups. She also founded and chaired Tisch’s Department of Art and Public Policy.

In 2009, President Barack Obama appointed her as the vice chair of the President’s Committee on the Arts and Humanities. In this work, she helped launch innovative arts education programs in public schools throughout the nation.

In 2015, she began in her role as president of Spelman College, where she propelled the nation’s oldest historically Black college for women to new levels of distinction. In the 2021 U.S. News & World Report college rankings, as announced in September 2020, the college increased its standing on multiple lists, including moving up from No. 57 to No. 54 in the liberal arts. Five years previously, the college was at No. 77.

A writer and a contributor to several publications, Campbell received the 2018 Hooks National Book Award for her book “An American Odyssey: The Life and Work of Romare Bearden” (Oxford University Press, 2018). A fellow of the American Academy of Arts and Sciences, Campbell served on the board of The Alfred P. Sloan Foundation and serves on the boards of the Doris Duke Charitable Foundation and the High Museum of Art, and the Association of Governing Boards of Universities and Colleges Advisory Board.

Campbell has received numerous awards, including the Outstanding New Yorker Award, New York’s City Arts Award and fellowships from the Rockefeller and Ford foundations. At Syracuse, she was honored with the Arents Pioneer Medal, a Chancellor’s Citation and the College of Arts and Sciences’ Distinguished Alumni Award. 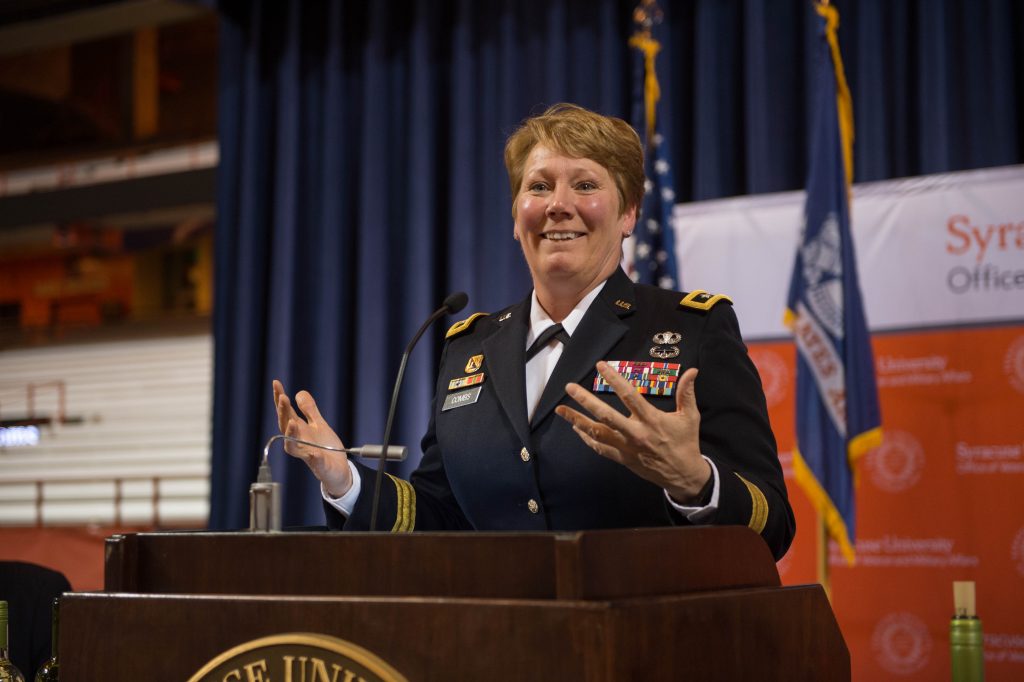 Combs served in the U.S. Army with distinction for 33 years—as a trusted leader, decorated officer and inspiring mentor. Her military career, ranging from tactical and operational to strategic command, broke boundaries for women and epitomized the highest of standards in leadership in service to country. She is the former chief of staff, North American Aerospace Defense Command and U.S. Northern Command at Peterson Air Force Base. She became the 11th commanding general of the U.S. Army Cadet Command and the 85th commanding general of Fort Knox, the first and only female to be appointed to this position. She rose through the ranks to become one of only 99 major generals on active duty in the U.S. Army.

A veteran of Operations Enduring and Iraqi Freedom, Combs served as the joint nuclear, biological and chemical operations officer for U.S. Central Command, MacDill Air Force Base, Florida, and as the chief of staff for the Iraq Training and Advisory Mission in Baghdad.

Combs formed the first Sexual Assault Review Board in the Army at Fort Knox, which served as a model across the U.S. Army, ensuring more objective reviews of sexual assault. Her innovative work also included transforming the prevention of sexual harassment training across the U.S. Army Cadet Command, which was implemented in all ROTC units.

Named Woman of the Year in 2016 by the American Legion Auxiliary, Combs, who retired in 2018, has returned many times to the University, speaking at ROTC events, including the 100th ROTC Chancellor’s Review. She is an advisory board member for the Office of Veteran and Military Affairs at Syracuse University, providing counsel to leadership related to programs and initiatives to advance the educational aspirations of the University’s veteran and military-connected students. 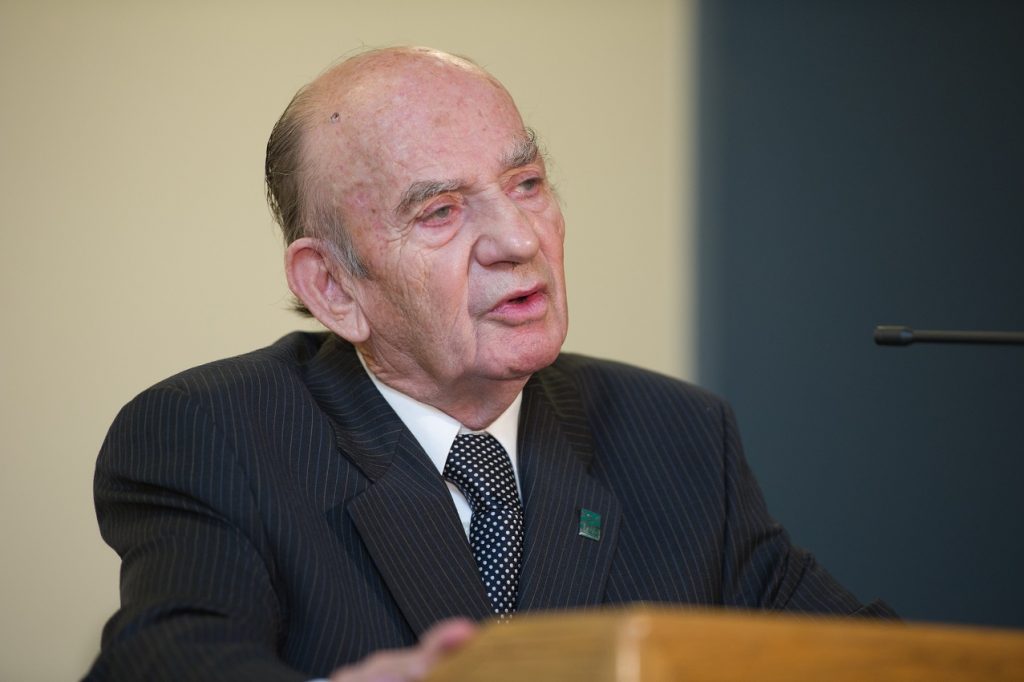 Strasser has dedicated his life to the public good. As a public servant both in the military and local governments, he was a pioneer in fiscal management and public administration, bringing new and innovative ideas to his profession. He has also served his community as a humanitarian and philanthropist—supporting causes for the protection of animals, environmental stewardship and the advancement of higher education.

Strasser’s accomplishments are even more noteworthy considering his personal story that brought him and his family to the United States. In 1940, his parents put the 8-year-old Strasser and his brother on a ship to escape imminent Nazi persecution in Europe. Arriving in the United States as refugees, the brothers, who were unable to speak English, were taken in by an aunt in New York City. Their father followed a few years later, but their mother died in France. Strasser has often described this escape, and the chance to build a new life in America, as the underlying incentive for his philanthropy and altruism.

In 1953, he received a B.A. in history from the College of Arts and Sciences and the Maxwell School of Citizenship and Public Affairs at Syracuse University, where he was in ROTC and earned Phi Beta Kappa. After graduation, he served as a finance officer in the U.S. Army during the Korean War. Strasser then returned to Syracuse University and received an M.P.A. from the Maxwell School in 1958.

Strasser began his post-military career as the first budget officer of Savannah, Georgia, where he was nominated as Young Man of the Year for saving DeKalb County a quarter of a million dollars. He compiled and published the city’s first budget manual, receiving national recognition from the Municipal Finance Officers Association of the U.S. and Canada. He later served the city of Jacksonville, Florida, as budget officer, serving in the area’s newly consolidated government, helping to build and manage a major, growing urban center. Among many other achievements, he also introduced civilian, professionally trained fiscal administrators into fire and police departments. Strasser, who was president of the American Society for Public Administration, served in various fiscal posts in Jacksonville until he retired in 1996.

Since retiring, Strasser has devoted himself to philanthropy and community service. As an advocate for animals and the preservation of natural spaces, he has supported and served as a board member for Tree Hill Nature Center, First Coast No More Homeless Pets and the Jacksonville Humane Society and Animal Shelter, all in Jacksonville, Florida.

At Syracuse University, Strasser, an honorary member of the Maxwell Advisory Board, endowed the Joseph A. Strasser Endowed Professorship in Public Administration, the first named and endowed professorship specifically focused on public management at the Maxwell School. He also provided funding for renovations to Maxwell’s multi-use public events room—renamed the Dr. Paul and Natalie Strasser Legacy Room in honor of his parents; the school’s central atrium, connecting Maxwell’s two main building; and a large study/meeting space for students in public administration and international relations. In support of top Maxwell graduate students, he established the Strasser Endowed Scholarship Fund.

In honor of his professional and personal accomplishments, Strasser received the Maxwell School Horizon Award for philanthropy and voluntarism, the first-ever Maxwell Award for Public Administration, the Melvin A. Eggers Senior Alumni Award and the George Arents Award.