Jake Kahane ’21, an economics student in the College of Arts and Sciences and the Maxwell School of Citizenship and Public Affairs and multi-program Syracuse Abroad alumnus, has recently been published in the Academy of Economics and Finance Journal. 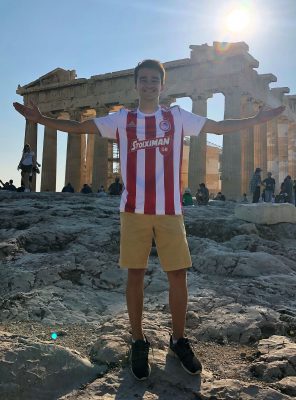 The idea for “Rip it like Rapinoe: A Study on How Gender Equality Can Change the Face of World Soccer” was born in Fall 2017, when Jake spent his very first University semester in Europe as part of the Discovery Madrid program for first-year students. His father, Leo Kahane, recalls that “when he was boarding a plane to Madrid as an 18-year-old, we had trepidation about our son spending his first semester as a college student in a foreign country. But it turned out to be one of the best experiences of his four years as a Syracuse student. He came back a different person, more mature and confident.”

Amalia Yrizar, assistant director at Syracuse Madrid, remembers her time with Jake and the impact he made on campus. “His wide smile and interest in learning, exploring and understanding the environment made him a very special student. He also excelled in the classes he took—especially in the history class that I teach where he mixed with upper-class students. As his professor, I could not find any difference academically between him and them.”

As an avid sports fan, Jake took advantage of being in Spain to attend several football matches (that is, soccer games). He also started a fun tradition of collecting jerseys from the local teams everywhere he visited and taking a photo with the sports gear near each city’s iconic landmark. Yrizar “will never forget the long hours Jake spent at our office talking with our staff about soccer, and of course, wearing his collection of jerseys.”

While watching soccer abroad, Jake became increasingly curious about why the U.S. men’s team seems unable to compete with their European counterparts, yet the U.S. women regularly dominate the field. After returning to the United States and beginning his time on the Syracuse campus, Jake met Rodney Paul, director of the Sport Analytics program and a professor in the Department of Sport Management in the David B. Falk College of Sport and Human Dynamics. Paul encouraged Jake to explore his curiosity and supported him in writing a paper about the issue.

The paper conducts comparative analysis of gender equality and sport across multiple countries. Using indicators like the Gender Gap Index, labor force participation, life expectancy and education, Jake performed mathematical regressions to suggest that increased gender equality within a country leads to improved performance for its women’s national soccer team. Paul recalls that Jake “was a pleasure to work with—not only was he dedicated to his project, but also it was obvious how deeply he cared about the issue.”

Jake thought that sophomore write-up would be the end of it, but then he found his way abroad again in Fall 2019. While spending his semester at Syracuse Florence, Jake had the opportunity to expand his “Landmark Jersey” series while going to more matches in Italy. Amy Kleine, assistant director of health and wellness, says that “Jake embodies the type of student we hope to have on our abroad programs in so many ways. Along with being incredibly intelligent, open-minded, and truly caring about others, he made it his mission to immerse himself in the local culture and in particular, follow the world of soccer in Italy/Europe.” While studying in Florence, Jake fell in love with the sport all over again and decided to push his initial paper into something more substantive. 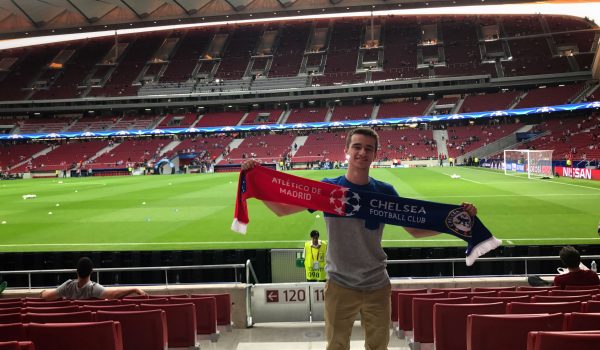 After receiving positive feedback from a conference presentation in Atlanta, Jake pursued publication. The Academy of Economics and Finance Journal is a peer-reviewed journal publishing selected research from its annual meetings. The journal focuses on the intersection of economics and finance, and is especially interested in work that holds a special niche within those fields. Jake’s use of economics research and a gendered lens to explain the global sports market is a strong example of interdisciplinary and real-world relevant scholarship. According to Paul, “Jake shows great insights about both economics and sports and his natural curiosity and inquisitive nature make him a natural for research. He had the opportunity to show off his skill set in economics, statistical models, and writing and the publication of his work was an excellent culmination of the process.”

Throughout his senior year, Jake maintained his relationship with European football not only through the publication process, but also through his connections to Syracuse Abroad. He serves as one of the University’s global ambassadors, sharing experiences with other students—including his memories of kayaking through downtown Stockholm during Syracuse London’s Signature Seminar on Sustainability and Environmental Justice. He has mentored discovery groups in both Madrid and Florence, and in his final undergraduate semester, Jake became a four-time Study ‘Abroad’ alum by taking one of Syracuse’s Abroad@Home courses.

Kleine says, “It is no surprise to me that Jake has gone on to utilize what he learned while abroad and produce this outstanding article in his field of study.”

Syracuse Abroad has announced a new study abroad program in Santiago, Chile. The new semester program Santiago Center (courses in English), launching in spring 2024, will provide students with an opportunity to study abroad in South America and take courses…

We’re only a month into 2023, but it’s not too early to start planning for the fall. Syracuse University has finalized the dates for three signature fall weekends on campus—Law Alumni Weekend, Orange Central and Family Weekend. Each weekend will…

Harlan London, professor emeritus of child and family studies (now the Department of Human Development and Family Science) in the Falk College, died on Dec. 19, 2022. He was 93. London was a teaching faculty member for 24 years and…