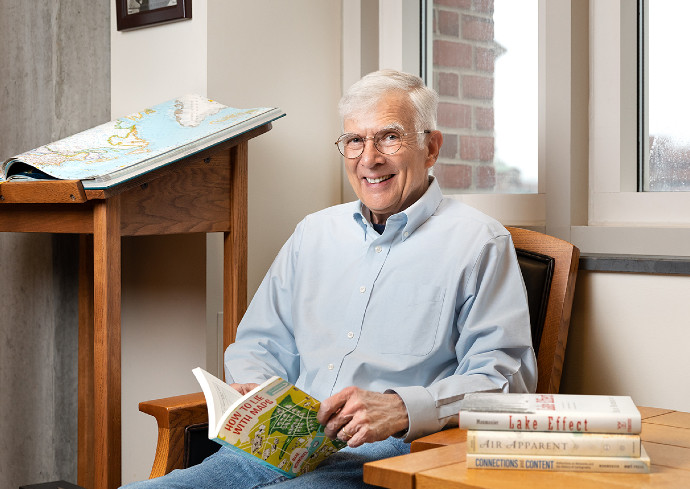 As he wraps up a nearly 50-year career with the Maxwell School, Mark Monmonier, Distinguished Professor of Geography and the Environment, has received the Chancellor’s Citation for Excellence Lifetime Achievement Award.

The honor recognizes those at Syracuse University who have made extraordinary contributions to the undergraduate experience and research excellence, have fostered innovation and have supported student veterans. It was announced during the virtual One University Awards ceremony on May 7, 2021.

“You are a major figure in the discipline of geography and arguably the most influential academic cartographer of the past 50 years,” wrote Chancellor Kent Syverud in an award letter to Monmonier. “You have advanced the field immeasurably in mapping and map design, geographic information, cartographic technique and the history of cartography.”

Monmonier has authored more than 20 books, including the first general textbook on computer-assisted cartography (Prentice-Hall, 1982) and “How to Lie with Maps” which in December 2020 was named one of the “eight essential books for geographers” by Geographical Magazine, the National Geographic of the United Kingdom.

His latest book, titled, “Clock & Compass: How John Byron Plato Gave Farmers a Real Address,” is due out in early 2022. It tells the story of its namesake, who attended a pioneer Denver vocational high school, became a farmer in his mid-30s and patented several inventions including the “Clock System,” which assigned addresses to rural residences without house numbers.

Like Plato, Monmonier is regarded as an inventor. What has become known as the “Monmonier Algorithm”—based on an article he published in 1973, the same year he joined Maxwell—is an important research tool for geographic studies in linguistics and genetics. 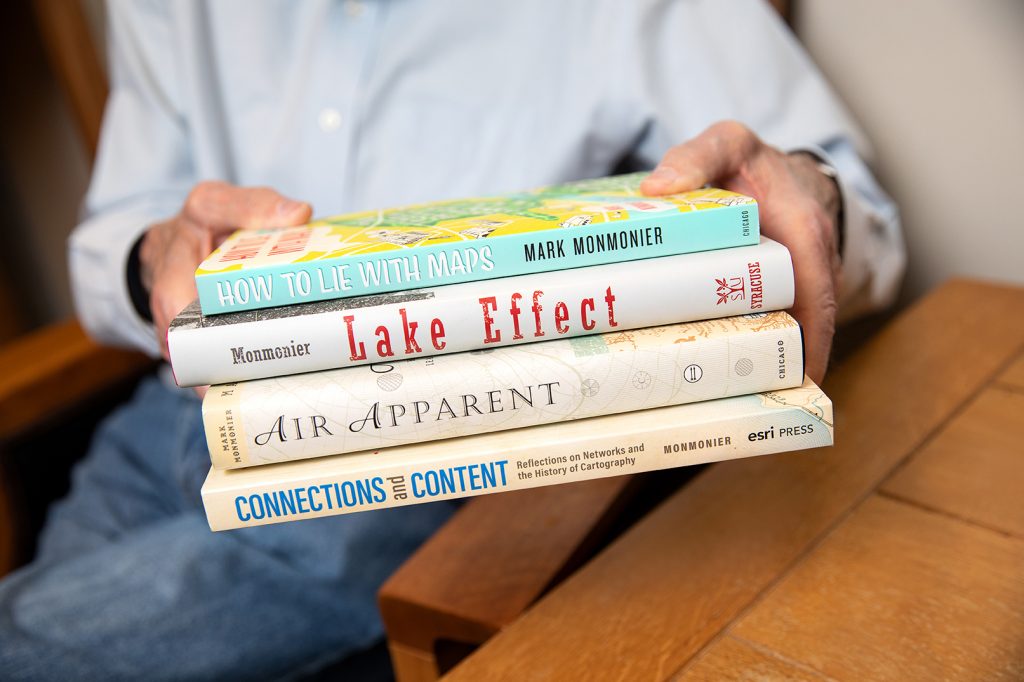 His lengthy curriculum vitae includes a Guggenheim Fellowship in 1984, editing the National Science Foundation-supported encyclopedia “Cartography in the Twentieth Century” (Univ. of Chicago Press, 2015) and publishing papers too numerous to count on everything from map design to automated map analysis to mass communication.

In addition, Monmonier has served on advisory panels for the National Research Council and the U.S. Environmental Protection Agency and has received numerous honors, including the American Geographical Society’s O.M. Miller Medal in 2001, and the German Cartographic Society’s Mercator Medal in 2009. In 2016 he was inducted into the Urban and Regional Information Systems Association’s GIS Hall of Fame.

Monmonier retires on May 20, 2021. “Professor Monmonier has had a truly extraordinary career,” says Tom Perreault, professor and chair of geography and the environment. “During his nearly 50 years at Syracuse University, he has taught thousands of students and advised and mentored an untold number of them. He leaves a legacy of scholarship that is second to none and which extends well beyond the University.”