George Langford, Virginia Burrus Elected to the American Academy of Arts and Sciences

Two faculty members in the College of Arts and Sciences (A&S) have been elected to the prestigious American Academy of Arts & Sciences. George M. Langford, A&S dean emeritus and Distinguished Professor of Neuroscience in the Department of Biology, and Virginia Burrus, the Bishop W. Earl Ledden Professor of Religion, are among 252 new members, including media entrepreneur and philanthropist Oprah Winfrey and neurosurgeon and CNN medical correspondent Sanjay Gupta. New inductees were selected to the academy in part for their effort in helping solve global challenges and creating meaning through art. 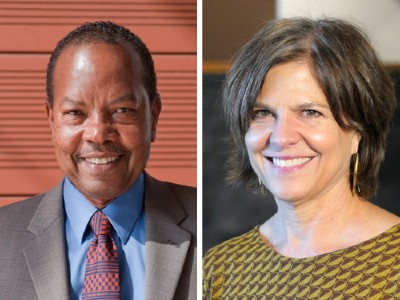 The American Academy of Arts & Sciences was established in 1780 by John Adams, John Hancock and others to honor accomplished individuals and engage them in advancing the public good. The academy’s mission is to convene members from increasingly diverse fields to share ideas and recommendations in the arts, democracy, education, global affairs and science.

Nancy C. Andrews, chair of the board of directors of the American Academy, says, “We recognize individuals who use their talents and their influence to confront today’s challenges, to lift our spirits through the arts, and to help shape our collective future.”

This year’s cohort of American Academy inductees were grouped into 30 sections spanning the humanities and arts; social and behavioral sciences; biological sciences; mathematical and physical sciences; and leadership, policy and communications. Langford was one of nine inductees to the cellular and developmental biology section, and Burrus was one of eight members elected to the religious studies section.

“I am proud and delighted that George Langford and Virginia Burrus, both distinguished members of our faculty, have been elected to the American Academy of Arts and Sciences,” says A&S Dean Karin Ruhlandt. “They have devoted themselves to advancing knowledge in the service of humanity, and their contributions to biology and religion, respectively, have earned them this well-deserved recognition. I congratulate them on this career-defining achievement.”

Burrus has taught religion at Syracuse University since 2013, specializing in the literary and cultural history of Christianity in late antiquity, with emphasis on issues of gender, sexuality, embodiment and ecology. Prior to her time at Syracuse, she taught at Drew University in Madison, New Jersey, from 1991 to 2013. She has written and co-authored 12 books and edited volumes, including “Ancient Christian Ecopoetics: Cosmologies, Saints, Things” (University of Pennsylvania Press, 2019), winner of the Borsch-Rast Book Prize in 2019. She is active in professional societies and on editorial boards and has been the recipient of fellowships from the American Council of Learned Societies, the European Institutes for Advanced Studies and the Cyprus American Archaeological Institute. She is currently a fellow at the Clark Art Institute, working on a book called “Earthquakes and Gardens,” dealing with destruction, resilience and what it means to cultivate relationships to places.

Langford, a member of the biology faculty in A&S since 2008, served as dean of the college from 2008 to 2014. His research is focused primarily on the cell and molecular biology of the actin cytoskeleton in health and disease. He is a member of many professional societies, including the American Society for Cell Biology, the American Association for the Advancement of Science, the Howard Hughes Medical Institute’s Science Education Advisory Board and many more. Langford is also a proponent of increasing diversity in STEM. He is program director of the CHANcE project, which creates an inclusive environment for students from groups underrepresented in STEM, including minorities and first-generation students in courses in STEM departments.