The John Simon Guggenheim Foundation has announced that Stephen Kuusisto, University Professor in the School of Education and director of interdisciplinary programs and outreach at the Burton Blatt Institute in the College of Law, has been awarded a 2021 Guggenheim Fellowship in Poetry.

Kuusisto’s project, “Eavesdropping: The Poetry of Blind Listening,” builds on his previous work, including the memoirs “Planet of the Blind” (a New York Times “Notable Book of the Year”) and “Eavesdropping: A Memoir of Blindness and Listening.” His poetry collections include “Only Bread, Only Light” and “Letters to Borges.” His newest memoir, “Have Dog, Will Travel: A Poet’s Journey,” was published in 2018. His latest poetry collection is called “Old Horse, What is to Be Done?” 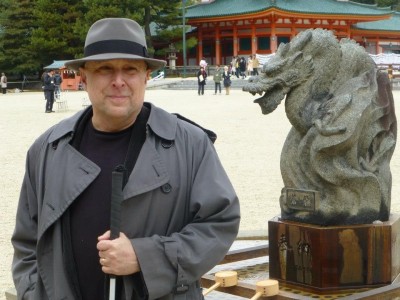 His work explores the reality that blind people are not casual listeners. Blind since birth, he recounts with a poet’s sense of detail the surprise that comes when we are actively listening to our surroundings. His writings describe and celebrate the aural landscape that he navigates and the soundscapes that he experiences in nature, music, travel and daily life.

A graduate of the Iowa Writer’s Workshop and a Fulbright Scholar, he has taught at the University of Iowa, Hobart & William Smith Colleges and The Ohio State University. Kuusisto has served as an advisor to the Metropolitan Museum and the Museum of Modern Art in New York and the National Endowment for the Arts in Washington D.C., and has appeared on numerous television and radio programs including The Oprah Winfrey Show; Dateline; All Things Considered; Morning Edition; Talk of the Nation; A&E; and Animal Planet. His essays have appeared in The New York Times; The Washington Post; Harper’s; Reader’s Digest; and his daily blog “Planet of the Blind” is read globally by people interested in disability and contemporary culture.

In 2021, the Guggenheim Foundation awarded fellowships to a diverse group of 184 artists, writers, scholars and scientists. These exceptional candidates were chosen through a rigorous peer-review process from almost 3,000 applicants.

Created in 1925 by Senator Simon and Olga Guggenheim in memory of their son John Simon Guggenheim, the foundation has offered fellowships to exceptional individuals in pursuit of scholarship in any field of knowledge and creation in any art form, under the freest possible conditions.