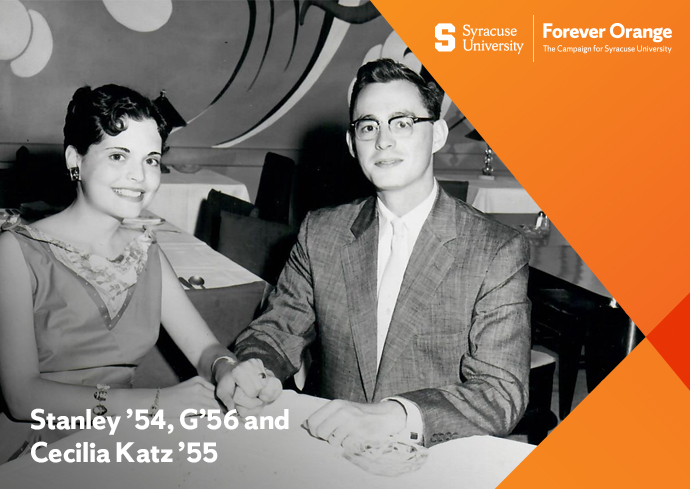 “My parents literally grew up with nothing. Their own parents were poor immigrants from Ukraine and Bessarabia—an area that is now Moldova and part of Ukraine,” says Mitch Katz ’88, of his parents, Stanley ’54, G’56 and Cecilia Katz ’55. “The University is where they met, fell in love and began their life journey together, which took them all over the globe. The Maxwell School opened a window into that world for my dad.”

“My folks were proud of the Maxwell School’s mission of educating students about their responsibilities as citizens of the world and directing them to use their talents and success to provide opportunities to others,” says Mitch. And now, through the Katz’s recent $2 million gift to Syracuse University’s Forever Orange campaign, graduates of the Maxwell School of Citizenship and Public Affairs may be similarly inspired to make an impact on the world.

Stanley Katz was truly a child of the Depression, raised in Albany, New York, on a farm with no central heat or indoor plumbing. A turning point in his childhood was when his older brother bought him a clarinet for $20. He loved making music and discovered he could make money doing it, playing both saxophone and tenor sax in a couple of big bands of that era. He traveled the country until the glamour wore off and he began to think seriously about getting an education. After two years at a small commuter college, he saved enough money working at a shoe store and playing jazz to attend Syracuse University. And that’s where his window to the world opened wide.

Stanley excelled in economics. He told Mitch about an early experience in class with the legendary Melvin Eggers, an economics professor who became the University’s ninth Chancellor. “My dad always recalled Professor Eggers starting his first economics class by ripping up a $1 dollar bill,” says Mitch. “This wasn’t that long after the Depression! As students were stunned by the audacity, Professor Eggers proceeded to explain what made this piece of paper such a powerful store of value.”

Stanley was also inspired by Professor Jesse Burkhead, who mentored him as he wrote his master’s thesis. “He encouraged my dad to apply to the U.S. government’s prestigious Young Professionals program. At Syracuse University, my dad was taught by really smart people who pointed him in a direction, gave him a purpose and then a career,” Mitch says. “Without their guidance, he would not have known which way to launch.”

Stanley also literally fell in love in Maxwell. He met Cecilia Sigalowsky, a beautiful and smart College of Arts and Sciences undergraduate student, honors student and member of the Sigma Delta Tau sorority, in the Maxwell School library where she came to study, just up the hill from her family home on Henry Street. They married after she graduated and while he was finishing work on a master’s degree in economics.

Upon graduating from Syracuse, the young couple moved to Washington, D.C. Stanley’s first job was at the U.S. Bureau of the Budget in Washington, D.C. His career progressed from Washington to capitals around the world, including working at the Organization for Economic Cooperation and Development in Paris; the World Bank; the U.S. Department of Commerce, where he rose to deputy assistant secretary, responsible for international economics; the Asian Development Bank (ADB) in Manila, Philippines, where he was vice president from 1978 to 1990; and, lastly, the brand new European Bank for Reconstruction and Development in London, where he served as advisor to the president. A former colleague at the ADB, William R. Thomson, credits Katz with raising the ADB’s profile and enabling it to play a significant developmental role throughout Asia.

In 1999, when he was inducted into the Columbia High School Alumni Hall of Fame, Stanley wrote, “I have tried to bring honor to my family and credit to my community. And in my own small way, I’ve tried to repay this great country of ours for the countless opportunities it has offered me.”

Mitch says his parents were “selflessly devoted to each other for nearly 62 years, until my mother passed away in May 2017.” Stanley passed away on Nov. 10, 2020.

Throughout their lives, the Katzes remained humble, never losing sight of their shared commitment to the values of Humanistic Judaism like inclusion, equity and advocacy. As Mitch describes: “Humanistic Jews believe in the human capacity to create a better world, a ‘besere velt’ in Yiddish.” In his eulogy for his mother, Mitch says he embraced her values, including education, culture and “tikkun olam,” or healing the world: “I will do what I can to advance my mom’s values and imbue them in a younger generation, in her memory.”

That is what the Katz gift to the Maxwell School provides, in supporting two funds:

Mitch says his parents always lived well below their means and never paid much attention to the fortune amassed over years of hard work. With his own degree from Syracuse University and a chartered financial analyst (CFA) designation, Mitch dedicated the last two decades to ensuring their estate remained well-invested.

“My mom and dad gave me my first piggy bank when I was 6 or 7 years old,” recalls Mitch. “Even at that young age, it was of tremendous value to me for some reason.” Now, in charge of the Katz family funds, he continues to demonstrate the value of his parents’ hard work, generosity toward others and their love for Syracuse University.