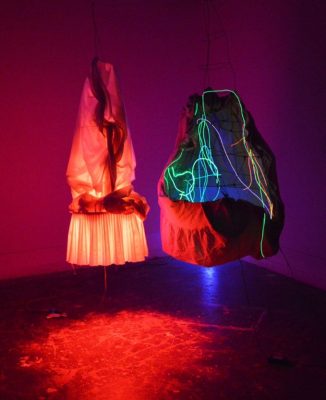 Artwork from the “Carrying the Thick Present: Fabulation” exhibition at the Point of Contact Gallery. (Photo courtesy of Catherine Spencer)

The exhibition will be on view at Point of Contact Gallery from March 30-May 21. Admission is free and open to the public by appointment only, with proper social distancing and face masks worn over the nose and mouth. Guided tours will be available virtually or upon request.

To book an appointment, visit puntopoint.org. “Carrying the Thick Present” is broken down into three central themes: intimacy, fabulation and trauma. “Fabulation,” on view at Point of Contact Gallery, features six artists’ exploration into the potentials of fabulation, that is, of fabricating the real through speculative storytelling and alter-worlding. Eerie environments and monstrous organisms emerge. Communal care, dancing with ghosts and grieving with others are forwarded as methods of bearing the weight of loss. Gaming and tales of multispecies kinship heighten awareness of our enmeshment within a multispecies landscape. Through the gesture and practice of fabulation, these artists’ works offer other configurations to dwelling with loss and open us into an appreciation of our entwined shared living and dying. Through fabulations, these works reimagine the thick present and its multiple past and future durations, disrupting habitual narratives about the self and about our ways of living together.

Katlyn Brumfield grew up in Madison County, Kentucky, and earned her bachelor’s degrees in art history and studio art from the University of Louisville. Her sculptural work draws from the material culture of Appalachian agrarianism to create ritual settings for ecological mourning. Brumfield has collaborated with scientific collections and conducted international fieldwork in her research and creative practice. By weaving scientific knowledge into elegiac and regional narratives her works embody the emotional dimensions of imminent planetary catastrophe.

Ellery Bryan is a nonbinary visual artist working primarily with loss, ritual and temporality. Their artwork manifests as tactile objects, written and verbal text, aural installations, film and video. They envision the potential for tangible media and everyday environments to perform as entrances for mysticism and transcendent futures. They are based on unceded Piscataway land currently called Baltimore, Maryland, and have shown their work at institutions such as the Museum of Art and Design in New York and the Baltimore Museum of Art.

Jihun Choi received a bachelor of arts degree in media studies and production from Temple University in Philadelphia in 2017. He uses video documentation of self-expression to illuminate social injustices that directly affect him, while also investigating and identifying the complexities of humanities and the side effects of a society compartmentalized by identity. He identifies this as social gaze; a product of social construction, that is a tainted lens that everyone subliminally looks through. Choi’s position as an Asian minority artist is to express the lost sense of belonging that was generated from his own experiences and exposure to the diverse culture.

Alvin Huang was born in New York, grew up in the U.K. and now lives in Taiwan. He earned a B.S. in life science in 2011 and now takes an interdisciplinary approach toward the computer art field. His works focus on fictional biodiversity, where he uses them as a figurative device to invite people to think through real-world issues.

Catherine Spencer from rural upstate New York uses a wide range of materials in her work. By transforming found objects beyond recognition, she offers her audience an alternative environment.  These environments reference various forms of escapism as well as the distortion of emotional pain. She received a bachelor of fine arts in painting at Alfred University in 2013.

Dahee Yun was born in March 1991 in South Korea and currently works in Syracuse, New York. She is a filmmaker, painter and film educator and her films have screened at numerous international film festivals. Conceptually, Yun investigates blurring boundaries such as reality and dreams and questioning normality; furthermore, her works always talk about women and animals based on her autobiographical story.

Manuela Hansen is a Fulbright Fellow from Argentina pursuing an M.A. in modern and contemporary art: critical and curatorial Studies at Columbia University. Her field of research includes contemporary art with a focus on the posthuman turn, institutional critique and Latin America. Through a post-humanist feminist lens, her thesis focuses on works by Mariko Mori, Anicka Yi and Mika Rottenberg, and argues that they can be seen as challenging pervasive dualisms in Western thought. Hansen currently serves on the steering committee of the Miriam and Ira D. Wallach Art Gallery; she has also served at MALBA Joven’s steering committee (Young Friends Association of the Museum of Latin American Art of Buenos Aires). She has worked as adjunct professor of Latin American and Argentinean art in Universidad del Salvador, Argentina (2016-19); as project manager of Art Basel Cities: Buenos Aires (2017-19); and as artistic director of Buenos Aires Art Week (2019). Manuela earned her bachelor of arts (with Honors) in arts management and art history at Universidad del Salvador Argentina.

This program is possible thanks to the support of the College of Arts and Sciences, the Office of Cultural Engagement for the Hispanic Community and the Coalition of Museum and Art Centers at Syracuse University.