Baptist Campus Ministry (BCM), a chaplaincy at Hendricks Chapel, has welcomed two additional campus ministers to Syracuse University, Alison ’13 and Anthony Rosa. Their goal is to provide a spiritual support system to students. 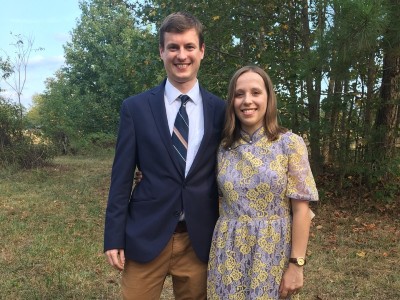 “Having listened to Alison and Anthony in Bible Study over winter break and recently meeting with them in person, they are dedicated spiritual guides and excellent new additions to our spiritual family on campus,” says BCM member Justin Mitchell ’22.

Rev. Devon and Kate Bartholomew lead BCM as chaplain and campus minister, respectively. They are expanding their team in order to connect with more students seeking spiritual support.

“Alison and Anthony have already contributed so much this semester, through teaching, connecting with others and mentorship. They each bring a unique set of skills, experiences and compassion that help them further our mission to ‘empower students to be the church wherever they go,’” says Kate Bartholomew.

Originally from Oneida, New York, Alison (Barbano) Rosa is a BCM alumna who graduated from Syracuse University in 2013 with a bachelor’s degree in marketing management and psychology. She is currently the center director of Care Net Pregnancy Center of CNY-Liverpool. Alison was involved in BCM during all four years spent at the University and was on the leadership team her senior year. She says that her time as a student in BCM helped her grow in her faith and shaped her call for future ministry work.

“I believe that BCM really helped shape my college career, especially once I got heavily involved during my last two years at the University,” says Alison. “BCM members were leaders who mentored me to follow Christ and helped me to grow into the person I am today.”

Alison says she has been reflecting on the differences between her student experiences and her new experiences as a campus minister. She is always contemplating how to be an effective leader during troubling times and she wants to support students to help them get the most out of their college experiences.

Anthony Rosa grew up in Brazil and moved to Central New York in high school. Anthony attended Clarkson University and graduated with a bachelor’s degree in mechanical engineering and physics. He is currently working towards his masters of divinity degree from the Southern Baptist Theological Seminary. Anthony says he is looking forward to learning more from Devon and Kate Bartholomew as well as the other chaplains at Hendricks Chapel.

After getting married the Rosas lived in Erie, Pennsylvania for work, but soon they felt called into full-time Christian ministry. In 2017, they moved to East Asia for a two-year Christian mission term. Both were inspired by their experiences abroad and now apply the things they learned to their own personal outlooks.

“I was challenged in my own life assumptions, especially cultural assumptions. I also was able to learn how to explain my faith in a different context, which was a unique experience,” says Anthony Rosa.

They have learned the importance of recognizing that there are basic human needs that transcend different cultures. For example, loneliness and relationships are human experiences. The Rosas keep these experiences and how they relate to faith in mind during their ministry work.

The Rosas will be assisting with Campus Church of BCM in Hendricks Chapel on Sundays at 11 a.m. ET, in addition to other weekly events. They are looking forward to finding ways to support students in order to help them stay connected and grounded.

“We are really interested in hearing from and talking to students. Not just teaching them, but also having a dialogue with students about key issues and how the Bible talks about them. Our goal is to promote thoughtful conversations to learn more about the students,” says Alison.