Richard Ingersoll, a longtime professor of art and architecture in Syracuse Abroad Florence, died on Feb. 27 in Spain.

A native of San Francisco, Ingersoll earned a doctorate in architectural history at the University of California, Berkeley in 1985 with a dissertation on “The Ritual Use of Public Space in Renaissance Rome.” He was subsequently a tenured associate professor at Rice University in Houston from 1986-97. 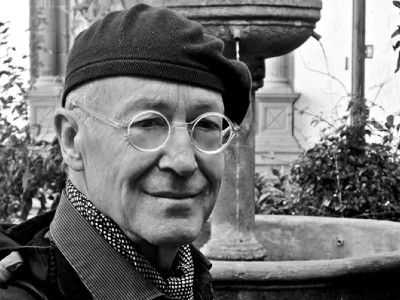 Ingersoll began spending time in Tuscany in 1970 before relocating there, in Montevarchi, permanently in 1997, the same year he began teaching courses in the history of art and architecture at Syracuse Florence. Over nearly 25 years, he taught many courses to Syracuse University students, including most recently Sustainable Urbanism, Italian Art and Architecture Since 1865, Renaissance Architecture, 1400-1600 and Eco-Cities in Europe.

He also held appointments at Universita di Ferrara and at the Politecnico di Milano, as well as visiting appointments in Haifa, Israel; Pamplona, Spain; Beijing, China; and Zurich, Switzerland. Ingersoll was the executive editor of Design Book Review from 1983-97 and contributed countless articles and criticism to many essay collections and professional journals, such as Arquitectura Viva, Lotus, C3 and Bauwelt. His book “World Architecture: A Cross-Cultural History,” republished in a second, expanded edition in 2018, is considered a “must-have” by aficionados of architecture, both professional and amateur.

While Ingersoll’s academic specialty was the architectural history of Renaissance Italy, he taught other courses in urban history, contemporary art, architectural theory and design, and sustainable urbanism. During the past decade he was very active in urban agriculture, or agricivismo, a synthesis of agriculture and architecture. 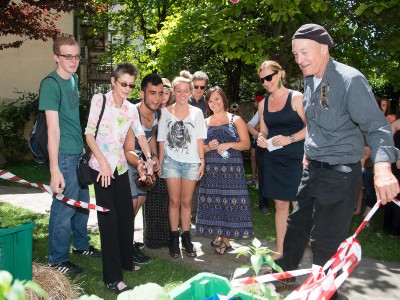 Richard Ingersoll, right, and members of the Syracuse Abroad Florence community at the ribbon-cutting for the center’s sustainable garden.

At Syracuse Florence, he inspired and helped to start a sustainable/nomad garden. He also experimented with new, sustainable field trips and site visits that were very carbon footprint friendly, using public transportation and bikes and organizing overnights in environmentally friendly hostels or leading the Syracuse Abroad students to cities like Freiburg to examine successful sustainable urban environments.

Throughout his career, Ingersoll encouraged approaches to architecture and sustainability in light of the challenges facing contemporary humanity. His most recent work focused on sustainable architecture, “After-COVID,” examines how the COVID-19 pandemic is reshaping urban spaces and, inversely, how urbanists must reshape cities and public spaces to respond and adapt to unexpected exigencies such as the one we have faced this past year.

His long-standing concern with how eco-friendly, sustainable cities could address basic human needs like putting food on the table and delivering clean water to city dwellers led him to organize many installations, the most recent of which focused on urban farming for the exhibition “Food, from the Spoon to the World,” at MAXXI-National Museum of 21st Century Art (2015-16). He was very much against urban sprawl, making a case against it in his 2006 monograph “Sprawltown, Looking for the City on its Edge,” and counter-intuitively for an architect, also contended that “We don’t need anymore buildings.”

At the time of his passing, Ingersoll was working on a new edition of his “World Architecture, 1900-2000. A Critical Mosaic, Volume I:  North America, USA and Canada” (originally published in 2000). Since his days at Berkeley, he was a pacifist and an antiwar activist.

“Richard was of generous intellect, a truly insightful writer and teacher, who was an advocate for everything from a cleaner environment to cleaner politics in Italy. His 2014 critique of the Venice Biennale is sobering and poignant. His wry, understated sense of humor made for many memorable conversations as well as more than a few laughs during symposia and lecture discussions,” says Lawrence Davis, associate professor and undergraduate chair in the School of Architecture. “I had the privilege of knowing and collaborating with him the years I was in Florence. He was part of the rich landscape of ideas and people there, in fact, over much of Europe as well. He was a good friend and I will miss him.”

“He will be greatly missed by his many colleagues at Syracuse Florence and at the Syracuse School of Architecture, as well as by the countless students whom he taught and mentored for more than 30 years,” says Sasha Perugini, director of Syracuse Abroad Florence.