A new nest camera following SU-Sue and Otto, the red-tailed hawks who’ve called Syracuse University home since 2012, is now live. The camera, donated by Anne Marie Patti Higgins ’76, G’90, is the newest of four cameras around campus that have been documenting the hawks at their nesting sites since Higgins donated the first one in 2017. 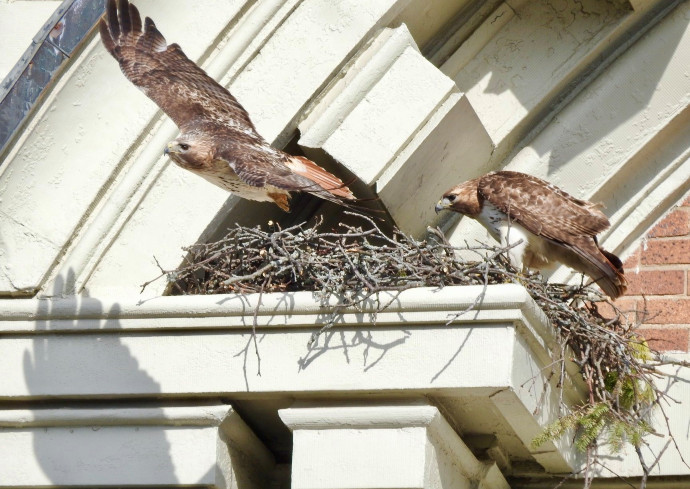 Otto flying off the nest.

The new camera is located on the west side of Lyman Hall, where hawks built a new nest last year. A camera was placed on the roof of Hinds Hall last year, which gave a diagonal view of the nest. However, the new camera, in addition to the Hinds Hall camera, will allow for close-up views and better tracking of the hawks’ location. “You can see them in the nest, and you can also see when they fly in and out and around campus,” Higgins says.

Higgins donated the cameras in memory of her late husband, Thomas L’67, also an avid birder whose favorite raptor was the red-tailed hawk. “The perfect way to honor my husband was to donate this in his memory,” Higgins says.

The cameras have reached hundreds of thousands of people around the world through the Syracuse University Nest Cam website and a Facebook page Higgins created where she follows the hawks and posts frequent updates. The page, titled “Red-Tailed Hawk Tales,” has viewers all over the world, Higgins says. She frequently receives messages from people interested in the birds and has worked with Syracuse University students who have done projects on the hawks for classes.

Updates about the hawks can also be found on Twitter and Instagram; those links are on the main page of the SU Nest Cam website, plus a new sign-up form for emailed updates, reminders and announcements.

The birds most likely will lay their eggs this month and will be seen around campus more frequently, perched on buildings or soaring above. “The hawks will be guarding the nest if they’re not in it and they’ll be hunting, so people may witness a prey catch on the SU grounds,” Higgins says.

While the University community is fortunate to be living alongside the hawks, there are also some things people should know to keep both themselves and the hawks safe. Higgins says people should not approach the birds, chase them, attempt to feed them or try to interfere with them hunting for animals, such as squirrels. 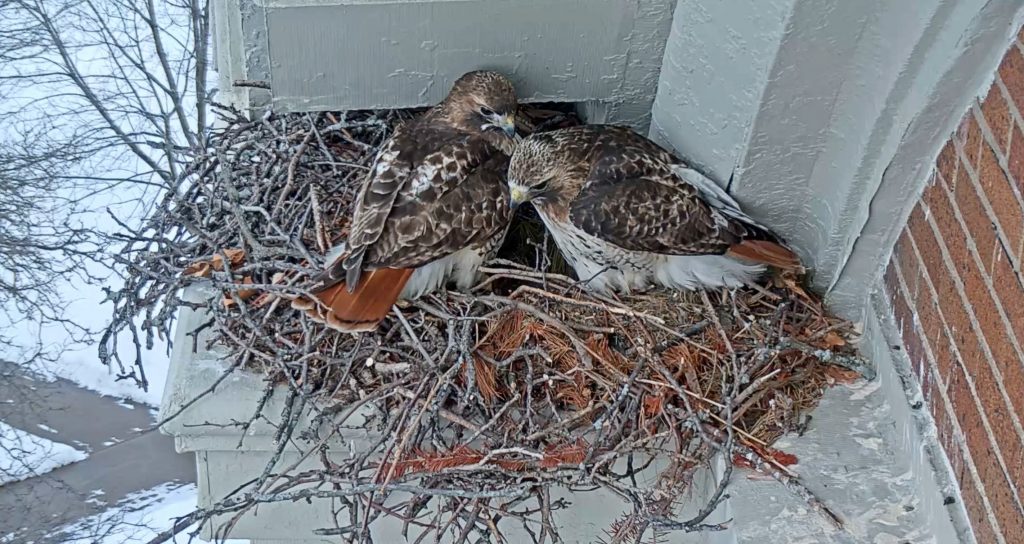 It is also important for people to understand some behaviors of the hawks that might seem unusual. Higgins recalls many past experiences where people believed a bird was injured when in fact it was just a chick playing or learning to hunt bugs on the ground. She emphasizes that more often than not the chicks are fine. If a student or University staff person is concerned about a bird, they should contact the Department of Public Safety and keep their distance from the birds.

With SU-Sue soon laying her eggs, Higgins hopes that the devoted hawk pair will continue to nest here and be a part of the Orange family. “We hope that the nest cameras will bring pleasure to the University and to people all over the world for years to come,” Higgins says.