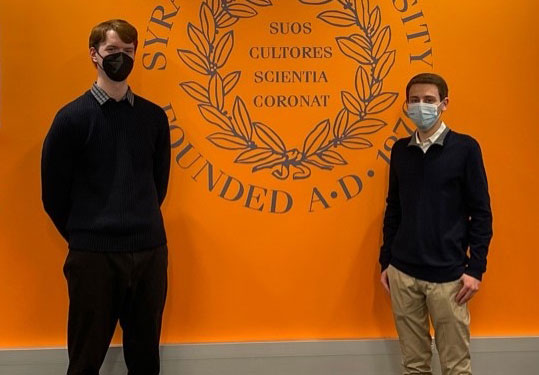 “The SABR Diamond Dollars baseball CASE competitions were influential to growing my professional skills, so I wanted to give an opportunity similar to that for students whose primary focus is football,” Koeppel says.

With the help of Assistant Professor Dr. Jeremy Losak and Sport Analytics Academic Advisor Francesco Riverso, the Syracuse University students partnered with Pro Football Focus (PFF), the data supplier for all 32 NFL teams. Koeppel and Ayers worked with Eric Eager, PFF’s vice president of research and development, who also served as a judge for the competition. PFF provided competition teams with facet grade and play-by-play data, which the teams were required to use in their analysis. PFF gave members of the overall winning team free memberships to its services.

Teams were tasked with solving the prompt of “Optimizing the Pass/Run Ratio in Different Sections of the Field.” They were given one week to analyze the prompt and create a 30-minute PowerPoint presentation that was presented live via Zoom on competition day. Teams incorporated play-by-play data to break down what they believed the optimal pass/run ratio is within five zones of the field. They applied those ratios to two NFL teams from the 2020 season, evaluated play-action rates of their teams, and summarized their findings. 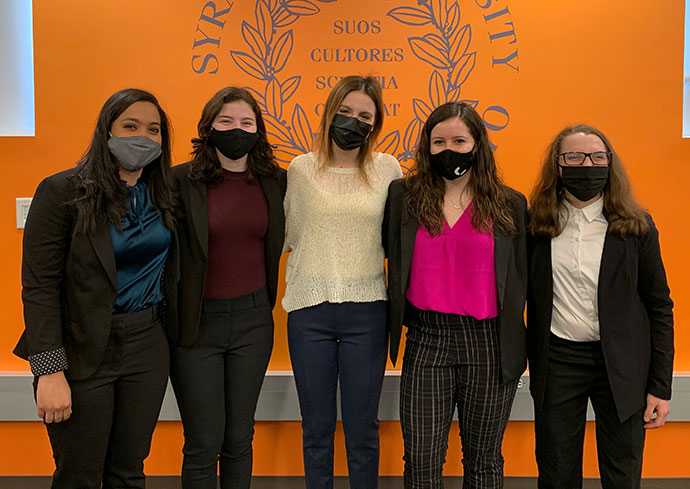 “This event was very well thought out and planned, and that showed in the types of solutions that teams proposed,” Eager says. “Much of analytics centers around the question that is asked, and the prompt of this competition was relevant to the ideas that are constantly being explored by teams and analysts of the NFL and college football.”

“Sport analytics is a fiercely competitive industry,” says Li, a senior football strategy analyst for the Indianapolis Colts. “For these students to have a forum where they can put their talents on display and get feedback from industry professionals can go a long way toward differentiating themselves.”

“The students did an incredible job with the competition,” Paul says. “I thank them, along with Dr. Losak and Francesco, for having the vision and drive to create this exciting event. I’m extremely proud of all of our student teams, especially that our all-female team won their room at the competition.”