The inaugural Lender Center for Social Justice Faculty Symposium was held on Thursday, March 4, in a Zoom format. The symposium is the culmination of a two-year research project by the first Lender Faculty Fellow, Casarae Abdul-Ghani.

Abdul-Ghani, who is an assistant professor in the Department of African American Studies, worked with a cadre of student fellows who served as co-investigators. Each of the four student fellows chose a well-established hashtag to analyze how those hashtags have catalyzed larger conversations about social justice issues at the national and international level.

Established by Marvin and Helaine Lender in 2018, the Lender Center for Social Justice seeks to create a hands-on experience for undergraduate and graduate students interested in social justice that crosses academic disciplines.

Center co-directors Marcelle Haddix, dean’s professor and chair of the reading and language arts department in the School of Education, and Kendall Phillips, professor of communication and rhetorical studies in the College of Visual and Performing Arts, introduced the symposium presentations, noting that the Social Justice #Hashtag Project is a digital humanities project, combining computational scientific research with history, sociology, writing and communication.

Joining by Zoom, Marvin Lender said, “This symposium is the beginning of a dream come true. What has been done by this first group sets a high bar for the work of future Lender Fellows.” Noting the challenges to social justice presented by the global pandemic and other national and international events, Lender added, “This was a tough year to do the kind of work that you are doing. We will forever be indebted to all of you who are doing the work.”

Lender also welcomed James Haywood Rolling Jr., professor of arts education in the College of Visual and Performing Arts and teaching and leadership in the School of Education, who will succeed Haddix as the Lender Center’s co-director in fall 2021.

The research presentation was preceded by an invited keynote address presented by Mark Anthony Neal, the James B. Duke Distinguished Professor and Chair of African and African American Studies at Duke University. Neal, the founding director of the Center for Arts, Digital Culture and Entrepreneurship at Duke, conducts research and teaches courses on Black masculinity, popular culture and digital humanities.

His presentation focused on the idea of social justice in the practice of digital media, including content aggregation and curation, provision of a platform, community formation and the implications of digital media for a generation that has been immersed in multitasking media technologies.

These themes were carried through the symposium. In introducing the project, Abdul-Ghani presented the idea of Instagram and Twitter as culturally neutral spaces that lead to critical discussions. She and the student fellows asked why these platforms are impactful and interrogated the aims that can push a national or international conversation about social justice topics to create a diverse and inclusive message that anyone can understand. 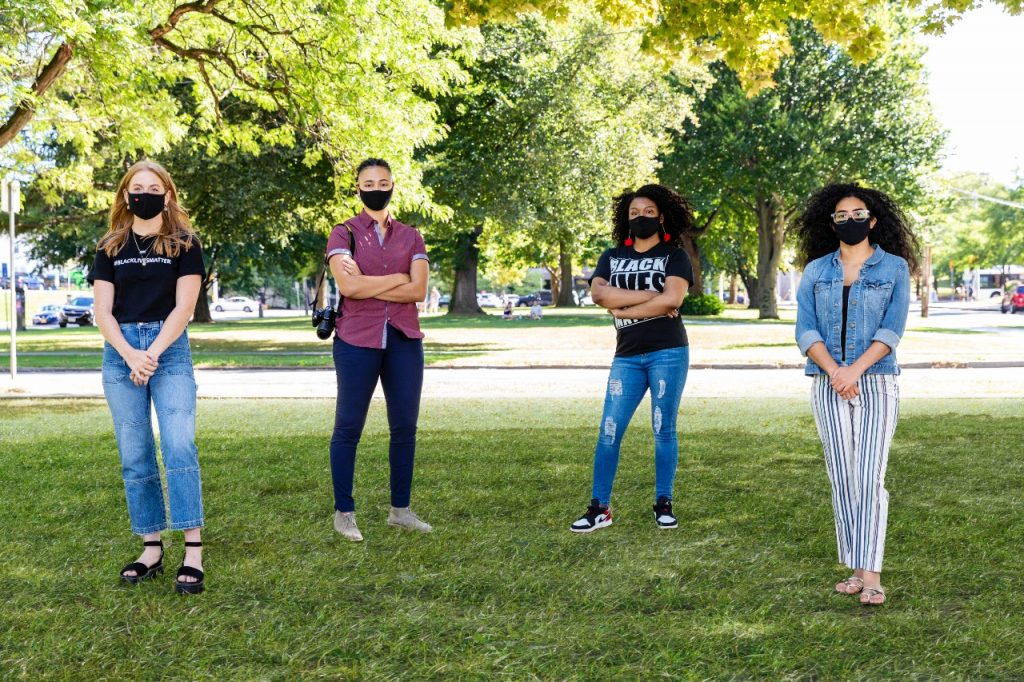 These concepts were further examined by Grace Asch ’22, Andrea Constant ’24, Andriana Lobo ’22 and Abigail Tick ’22 in their examination of four specific hashtags, their aims and outcomes.

Asch, a television, radio and film major in the S.I. Newhouse School of Public Communications, studied the hashtag #OscarsSoWhite. She found that the hashtag, created in 2015 when all 20 acting nominations by the Academy of Motion Pictures Arts and Sciences went to white actors, has been influential beyond the Academy.

“#OscarsSoWhite is not just about nonwhite actors receiving their due, but has become associated with the need for structural change in the film industry,” Asch says. “There’s a recognition that for real inclusion, there needs to be a fundamental change in filmmaking.”

Constant, a Ph.D. student in sociology in the Maxwell School of Citizenship and Public Affairs, examined the hashtag #SayHerName, which highlights police violence and gender-based violence against Black women and girls. Building on her extensive study of the history of criminalization of Black girls and women in the United States and Black-led social movements, including Black Lives Matter, Constant provided broad context for the proliferation of #SayHerName after 26-year-old EMT Breonna Taylor was killed by police in Louisville, Kentucky, as they executed a no-knock warrant.

Noting the geographical concentration of #SayHerName in Louisville, Los Angeles, New York City, Chicago, Washington, D.C., Atlanta and Philadelphia during the spring and summer of 2020, she found that much of the hashtag’s use stayed close to the original intent of shining a spotlight on police violence toward Black women and girls. However, Constant also noted that the hashtag has become international, indicating that it may be opening up discussion about gender-based violence for all women.

Lobo, a communication and rhetorical studies major in the College of Visual and Performing Arts, studied the hashtag #NiUnaMenos and its close counterpart #NiUnaMas. Pulling together the complex threads of cultural forms, government impunity, victim blaming and the economics of NAFTA, Lobo followed the use of the hashtags to mobilize mass protests in 2020 against the Mexican government.

The protests were sparked by anger that the government is not enforcing or implementing current laws aimed at curbing gender violence. Lobos explored the implications of the hashtags in protests against violence toward LGTBQ people and indigenous women, noting that economic vulnerability is another key factor contributing to gender violence. The use of the hashtags has spread beyond Mexico to Chile, Peru, the United States and Canada.

Tick, a triple major in sociology, women’s and gender studies, and citizenship and civic engagement in the College of Arts and Sciences and the Maxwell School, studied the rise of the hashtag #WhyIDidntReport, used by individual women telling their stories of sexual violence in the wake of the Senate confirmation of Brett Kavanaugh’s nomination to the U.S. Supreme Court. By explaining why they chose not to report their experience using the hashtag, women created a space where they could engage non-survivors and move from passive victims to active survivors.