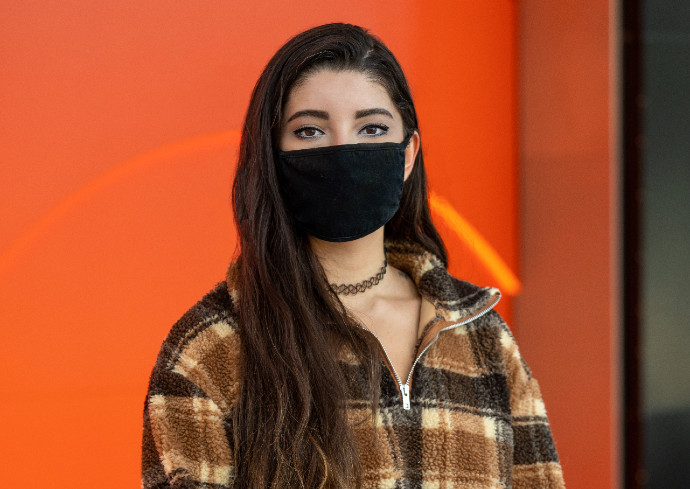 Francesca Ortega ’20, G’22 wants to help neighbors in her native Miami experience what their neighborhood will look like when it is under water. The city, surrounded by water and built on layers of porous limestone, is already experiencing the effects of rising sea levels due to global climate change. While Miami residents are accustomed to flooding during weather events and high tides, many—particularly in immigrant and socioeconomically disadvantaged communities—aren’t aware that entire neighborhoods may be underwater by 2050 and aren’t positioned to prepare for rising sea levels that will threaten homes and businesses.

When she was in first grade, Ortega learned about rising sea levels. In high school, she was appointed a Miami-Dade County Youth Commissioner, a position that allowed her to advocate for issues that affect her generation. She then was offered the opportunity to join Columbia University’s Learn+Do+Share lab, where she worked with high school students from across South Florida to create a documentary and accompanying ebook illustrating the reality of global climate change for their hometowns.

After finishing an undergraduate degree in television, radio and film, she’s pursuing a master’s degree in media studies at the S.I. Newhouse School of Communication. Her research examines how three-dimensional and immersive interactions can work to persuade people about the realities of climate change and what it means for them in ways that two-dimensional documentaries and educational materials can’t convey. She is investigating how an immersive experience compares to traditional two-dimensional media in promoting pro-environmental behavior.

“Growing up, I saw firsthand how many adults had no idea how rising sea levels will affect their neighborhoods,” Ortega says. “Others felt that they didn’t have a voice in policy decisions that are crucial to the future of their communities.”

Program director Bradley Gorham says that Ortega was a great fit for the media studies master’s program because she already had a strong grasp of extended reality technologies, and her research interests are a great fit for the M.I.N.D. Lab, a technology and visualization space that enables augmented reality, 3D graphics and measures human-technology interactions.

“Her research is in a cutting-edge area that is going to be a big part of the future of our profession,” Gorham says. “We were able to give her the opportunity because our media studies program is unusual in that it’s a research-focused program at the master’s level. About half of our graduates go on to earn doctorates and the other half do media research in the marketing and advertising industry.”

Ortega says her desire to use new technologies to advance social justice is a direct result of her experience and what she observed in her hometown. Her family immigrated from Nicaragua and she grew up in a community where Miami’s extreme income inequality was evident. A first-generation student, she earned her undergraduate degree at Newhouse with the support of a POSSE Leadership Scholarship. She excelled at Syracuse, becoming a Remembrance Scholar and taking part in the McNair Scholars Program.

“Francesca has an incredible work ethic and perseverance,” says Gorham. “I encouraged her to apply to the master’s program because she has what it takes to be a major contributor to the field.”

Ortega hopes to be accepted to a Ph.D. program with funding. “I want to use extended reality and artificial intelligence communications technologies to benefit first-generation immigrant communities,” she says. “I’m bilingual in Spanish and English and have seen firsthand how culture and language can be a barrier to inclusive, community-based research.”

Giving communities a voice, so they aren’t at the mercy of developers, of climate gentrification or of infrastructure development that prioritizes ocean views over flood risk, is one of her top priorities.

“I have been a financially independent student for my whole college and graduate school career and hope to be able to earn my Ph.D.,” Ortega says. “It will depend on funding, but I want the opportunity to be an influencer in the academy who also understands communities at the grass roots and can involve them in research. This is how to really create change in a way that includes communities.”