OnStage Blog has named Syracuse University and its Department of Drama as New York State’s best college theater program in its list of “The Best College Theatre Programs in Every State-2021 Edition.” 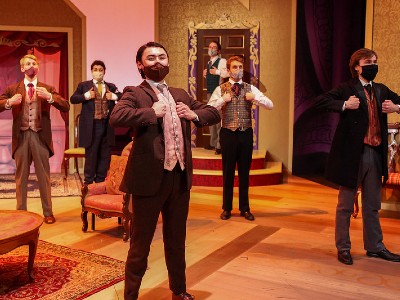 A still from Thornton Wilder’s “The Matchmaker,” a recent production the department filmed and offered as video on demand (March 4-9).

According to OnStage Blog’s post, the list was “researched and compiled by a committee that consisted of students, educators, parents and alums. All degrees within these programs were adjudicated including both performance, design and technology as well as direction, writing and any other areas of training. Factors taken into consideration were quality of faculty, variety of curriculum, facilities, career support, performance opportunities and scholarships, among others.”

The Department of Drama offers conservatory-style training at a major university, combined with a level of integration with a professional theater company–Syracuse Stage–that is unparalleled among undergraduate programs. Programs include bachelor of fine arts degrees in acting, musical theater, stage management, and theater design and technology, as well as bachelor of science degree in drama.