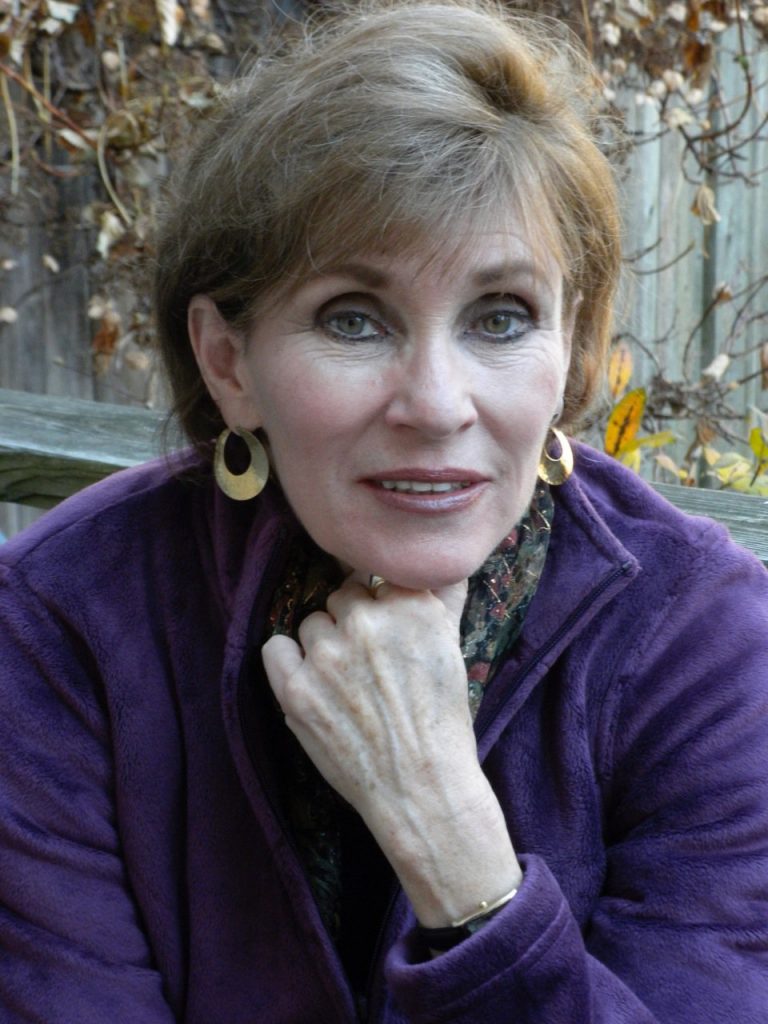 During the college experience, pivotal interactions and opportunities present themselves that shape a student’s future. For some, it may be an internship that introduces them to their future line of work. For others, it might be a specific class that piques their interest in a certain type of research. For Carol Bullard G’67 (M.A.), G’73 (Ph.D.), it was two transformative study abroad experiences in Florence, Italy, as a master’s student and then doctoral student that set the stage for a rewarding career, at first teaching art history and later in arts management and development.

In 1965, as Bullard was nearing the completion of credits needed for a master’s degree in art history, she received the surprising news that she had been awarded a Syracuse University Graduate Overseas Fellowship to take part in the recently established Florence Graduate Program in Italian Renaissance Art. She initially approached the opportunity with reluctance, thinking about the challenge of learning a new language, as all classes were held in Italian.

“Not knowing the language, I had been flying on faith that I would learn Italian if I were so lucky as to be selected,” says Bullard. “Subsequently, my faith was severely put to the test!” Thanks to a well-organized crash course in Italian led by Professor Frederick Jackson in summer 1965 and a special tutoring session in the fall semester, she was well prepared and continued her language study even as she and three of her classmates sailed to Europe in February 1966 aboard the ocean liner U.S. Constitution.

For Bullard, learning a new language was a necessity because the faculty at Syracuse had placed their confidence in her by granting her the fellowship, an opportunity for which Bullard is forever grateful. Now, as part of the Forever Orange Campaign, she has created an endowment for the next generation of aspiring art historians.

Established in 1964, the Florence graduate program—a flagship in the College of Arts and Sciences—opened a door for students to travel abroad to Italy to analyze firsthand some of the Renaissance’s most renowned works, such as Michelangelo’s “David” and Botticelli’s “Birth of Venus.” It is the oldest such program accredited in the United States where most of the study—two of three semesters—is conducted in Italy. Through their coursework and individual capstone research projects students carefully examine artistic styles and techniques, consider issues related to original audiences and settings, and closely study original documents and texts.

The graduate program in Italian Renaissance art was conceived by William Fleming and Abraham Veinus. Fleming established the Department of Art and Music Histories (originally known as the Department of Fine Arts) in 1947 and served as its chair for 22 years. Veinus was among the department’s first faculty, joining it in 1948. A musicologist, he analyzed and researched music, authored “The Concerto” (Dover Publications, 1944), and collaborated closely with Fleming on the landmark textbook “Understanding Music” (Holt, Rinehart and Winston, 1958). Each helped to transform the department into a national leader in the interdisciplinary study of the arts and played key roles in establishing the Florence graduate program. 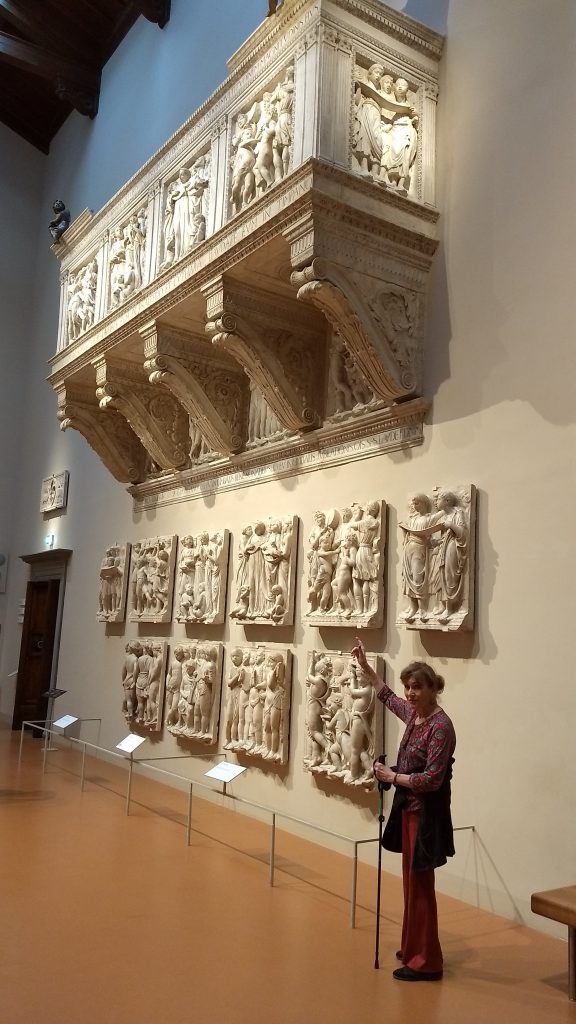 Carol Bullard with Luca della Robbia’s “Cantoria,” now in Florence’s Museum of Opera del Duomo. This Renaissance work of art, created for the Cathedral of Santa Maria del Fiore (also known as the Duomo), was the focus of Bullard’s master’s thesis.

“I feel indebted to Professor Fleming for the interdisciplinary approach he articulated in his groundbreaking book, ‘Arts and Ideas’ (Wadsworth Publishing, 1955),” says Bullard. “And I will always hold Abraham Veinus in the highest regard for his special way of impressing upon me the importance of looking deeply at artistic expression not only for the apparent themes art teaches, but also for the essential underlying realities that great works of art offer.”

Bullard says the endowment acknowledges the important roles Fleming and Veinus played in first envisioning the Syracuse University Florence Graduate Program in Italian Renaissance Art, and then establishing it with the participation of two of Italy’s most esteemed scholars of art at that time: Luisa Becherucci, director of the Uffizi Gallery, and Ugo Procacci, superintendent of monuments and museums in Florence. She says learning from these world-renowned experts on the history and conservation of art had a profound impact that she carried with her throughout her career. Their knowledge of the techniques of artistic production and restoration, coupled with a profound commitment to preserving the integrity of the original work of art, provided Bullard with an important foundation for her further development as an art historian.

Although the Syracuse graduate program in Florence has expanded and improved over time, Bullard feels fortunate to have attended in the very early years. The intimacy of her small class and the personal attention of world class scholars resulted in a life-changing experience.

“The benefits of the Syracuse University Graduate Program in Florence provided a firm foundation for everything that followed in my professional life,” Bullard says. “The intense study of some of the world’s finest art set a standard in my own mind of what is humanly possible and it has been a guiding light in my own life to achieve the best I can be.”

Bullard went on to teach art history at several institutions of higher education during the 1970s, including the State University of New York at Albany. When a university cut-back eliminated the positions of many junior professors, she moved into nonprofit arts management, which included expanding a regional arts council in Albany and establishing a development office at the Corporation of Yaddo, a 400-acre estate for artists in Saratoga Springs, New York. She rounded out her career as assistant vice president of corporate and foundation relations at the University at Albany and retired in 2007. Over the years, she returned to Italy numerous times.

Sally Cornelison, professor of art history and director of the Florence Graduate Program in Italian Renaissance Art, says Bullard’s generous donation will support the program’s future students by helping to fund the travel, lodging, and other expenses they incur while studying.

“As an alumna of the Florence Graduate Program in Italian Renaissance Art, Carol understands its value for students, especially the ways in which it hones critical thinking, writing, foreign language and research skills, to say nothing of what the experience of an extended residency in a foreign country does to instill both personal and intellectual flexibility and resiliency,” Cornelison says. “We are all so appreciative of her support.”

Karin Ruhlandt, dean of A&S, notes that the endowment will be a critical part of the program’s continued success. “A&S is proud to be home to such a well-respected course of graduate study,” she says. “Carol’s support will help us strengthen and improve this distinctive master’s program, so future generations of students will also have the opportunity to study in the cradle of the Renaissance.”

Bullard says it was after attending the 50-year celebration of the Syracuse Graduate Program in Art History on the main campus in 2014 and later visiting the Villa Rossa, a home away from home for Syracuse students in Florence, that she concluded it was time to turn her gratitude for the program into something more concrete. She says, “I hope many Syracuse students can benefit from this endowment and I encourage other alumni to join me by adding to the fund in years to come.”

Thanks to Bullard’s generosity, more College of Arts and Sciences students can now transform their own lives and deepen their knowledge of Renaissance art and culture by studying in Florence.