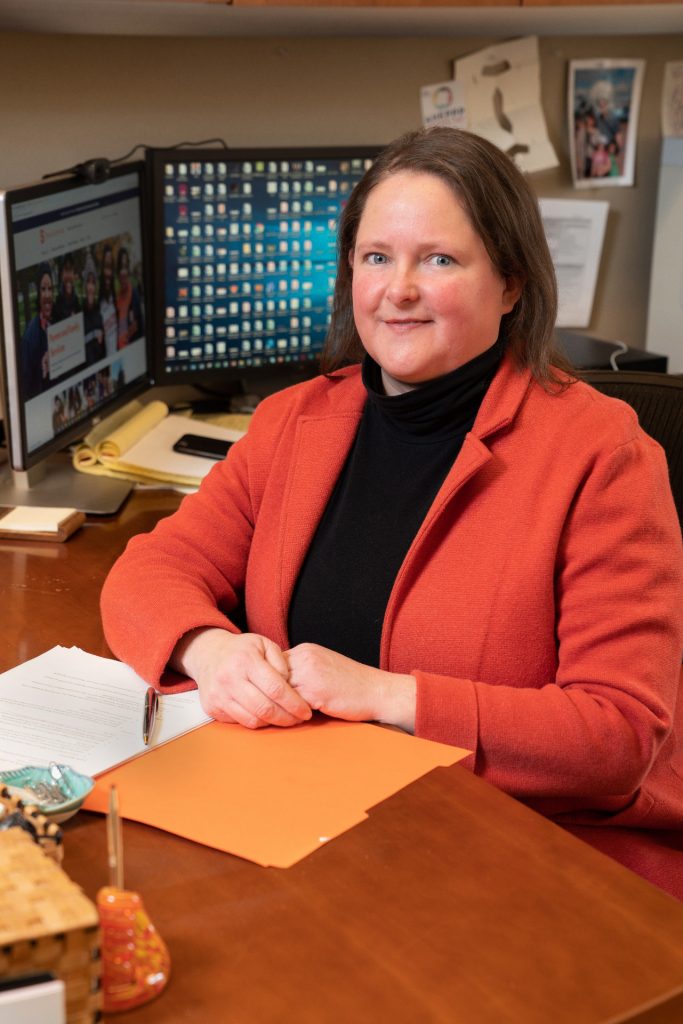 Missy Mathis-Hanlon’s first day in what was previously called the Parents Office was on Sept. 11, 2001. Social media sites like Facebook did not exist yet, and news about the attacks on the World Trade Center and Pentagon was not delivered instantly like it is today.

“I first was hearing about it from my own family members who were outside of New York City or working in the city. We were watching it or listening to it on TVs or radios,” says Mathis-Hanlon. Her priority then was to be an empathetic and creative problem solver.

While Mathis-Hanlon could see the news on the internet, mothers trying to communicate with students in 2001 could not simply send a text message. Many parents reached out to Mathis-Hanlon that day because they did not have a way to reach their children.

“The calls were different than you would expect. They weren’t necessarily calling from New York City,” Mathis-Hanlon says. Many parents who were evacuating high-rise buildings all over the country were calling, and just wanted to let their student know they were OK.

Two decades later, the methods Mathis-Hanlon uses to communicate with parents and students have changed, but the empathetic listening and creative problem solving in her position is the same. “Just being willing to listen to families, understanding a problem they’re trying to solve or a concern that their student has is a huge part of what we do,” says Mathis-Hanlon, now director of Parent and Family Services.

Marianne Thomson, associate vice president and dean of students, says Mathis-Hanlon treats every issue a family presents with reverence. “She’s so genuinely kind, and whatever is important to the family is important to her,” Thomson says.

Thomson says Mathis-Hanlon is a valuable contributor to the Dean of Students leadership team and helps shape the ways Syracuse University tries to feel like home to every student. “She’s very serious about that work,” says Thomson.

In 2020, Mathis-Hanlon was named Outstanding Senior-Level Professional by the Association of Higher Education Parent and Family Programming Professionals (AHEPPP): Family Engagement in Higher Education. She was recognized as a professional in the field who exemplifies service to the parent and family programming profession and demonstrates commitment to the field through innovation, involvement and leadership.

One example came from a parent at their wit’s end with their student.

“They had a really poor academic semester and were placed on academic probation,” says Mathis-Hanlon. In response, Mathis-Hanlon asked to be put in touch directly with the student. She spoke to this student on a regular basis and connected them with appropriate resources at their school/college and a case manager. She helped this student meet other students that shared the same interests. The student’s GPA increased dramatically.

Mathis-Hanlon says she felt rewarded seeing a struggling student succeed. “If they take the time, we talk about time management. We talk about all kinds of things that might be useful to them,” she says. “One of the most important things we do is resource referral,” says Mathis-Hanlon.

Along with professional accolades, the work Mathis-Hanlon does is evident in the social media posts, emails, phone calls and face-to-face interactions she has with parents and families. She is praised directly for making a large school feel like a small community. The relationships she has built with students and their families will often last long after the student graduates.

“I’m the kind of person who observes and listens a lot more than I talk. I think that is probably helpful to them because I do not have to have the first words or the last word. I can just take note of what they are saying and try to put pieces of puzzles together,” she says. “It can really be anything and everything, but if you have concerns, if your student is not sure how to navigate a particular situation, you can call us, and we’ll try to give you good information and try to connect you with people that can help.”