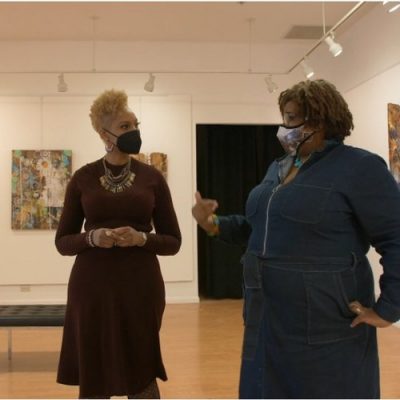 The Community Folk Art Center (CFAC) celebrates Black lives and voices in a new short film series, Black Arts Speak (BAS). Each episode of the series will feature a different Black artist and share their work, experiences and perspectives.

To mark the launch of BAS, the Center opened a new exhibition, “Stories My Grandmother Told Me” by artist and author Lavett Ballard, and released an episode highlighting Ballard’s inspirations and journey as an artist during the pandemic and Black Lives Matter movement. The exhibit is on view through March 20.

The BAS film series will release five episodes throughout the year and is funded by the Black Equity and Excellence grant from the Central New York Community Foundation. CFAC received this grant last fall to support online exhibits and programming. Tanisha M. Jackson, Ph.D., executive director of CFAC and creator of BAS, hopes the series will showcase the vibrant cultures and histories of people of African Diaspora, as well as raise public awareness of social and political issues impacting people of African descent.

“When I created Black Arts Speak, I wanted to celebrate our community and provide a platform where Black artists could express themselves, generate meaningful conversation, help others to heal and create social change,” says Jackson. “Through elements of visual activism and storytelling, artists like Lavett Ballard are shifting narratives and shedding raw light on issues.”

Inspired by history, her grandmother and personal experiences, Ballard’s work reflects social issues affecting primarily Black women’s stories within a historical context. Her exhibition, “Stories My Grandmother Told Me,” uses a combination of photo collages, paint, oil pastels and metallic foils layered over aged wood fences to illuminate racial and gender divides. To Ballard, the use of fences “is a symbolic reference to how fences keep people in and out, just as racial and gender identities can do the same socially.”

Ballard wants her pieces to educate, uplift and move people to look back on the legacies left to them and to enact change.

“Whether it’s about resistance, our civil rights or about colorism, I focus on creating work that visualizes the narratives of my people,” says Ballard.

Ballard’s work has been in film productions and exhibited at galleries and museums nationwide. She was commissioned to create cover art for Time Magazine’s special Woman of the Year double edition in 2020. She is also Yaddo Artist residency recipient, was nominated for a Pew Foundation residency and named by Black Art in America as one of the Top 10 Female Emerging Artists to Collect. Ballard earned a dual bachelor’s degree in Studio Art and Art History with a minor in Museum Studies from Rutgers University. She also holds a master’s degree in Studio Art from the University of the Arts in Philadelphia.

“It was an honor to capture Ballard’s story and to share her body of work,” says Jackson. “The BAS series has many inspirational short films to come.”

To schedule an appointment to view Ballard’s work or see her online gallery at CFAC, visit the CFAC website.

Founded in 1972, Community Folk Art Center, Inc. is a vibrant cultural and artistic hub committed to the promotion and development of artists of the African Diaspora. A proud unit of the Department of African American Studies, College of Arts and Sciences at Syracuse University, CFAC is a beacon of artistry, creativity and cultural expression within the Syracuse community, the region and the world.