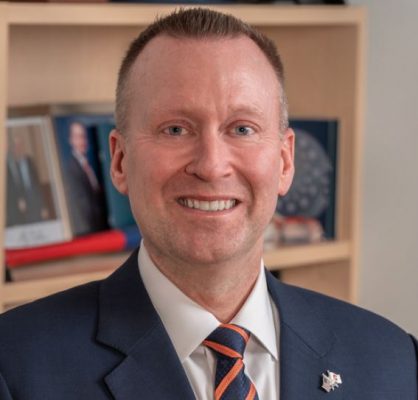 J. Michael Haynie, vice chancellor for strategic initiatives and innovation and founder and executive director of the Institute for Veterans and Military Families, wrote an op-ed for the Washington Examiner: “Make ‘Garage-Gate’ Matter.”

Haynie recently spoke with Lauren Schellin, a member of the Wisconsin Army National Guard. Over the past six months, Schellin has experienced the loss of four members of her National Guard unit to suicide. While Schellin’s story may sound shocking, Haynie says that as a veteran and veteran advocate himself, he has heard of far too many similar experiences amongst families struggling with “the epidemic of suicide among service members and veterans.”

Several years ago Haynie gave a TED Talk called “The Moral Obligation to Know Our Veterans,” where he encouraged all people to truly get to know veterans and military families. “Too often military service has the effect of socially isolating those who serve—from their families, friends and communities. Sometimes that isolation comes at a traumatic cost,” writes Haynie.

To best address this epidemic, Haynie says that the responsibility cannot lie solely in the domain of the Department of Veteran Affairs. Instead, Haynie argues that it is also up to the departments of Defense, Labor, Health and Human Services, Housing and Urban Development, and more to use their resources in addressing military-connected suicide. Haynie argues that this means not only focusing on mental health advocacy but also increased help with job training, employment, housing, food security and financial support.

Ultimately, Haynie says it is on all of us as a nation to help prevent veteran suicide.

To read his essay in its entirety, visit the Washington Examiner.

Syracuse University’s D’Aniello Institute for Veterans and Military Families (IVMF), Syracuse University Libraries and the School of Information Studies (iSchool) partnered to create and launch the IVMF Digital Library at divmflibrary.syr.edu. It includes IVMF-authored publications and research, as well as…

Si Yun (Sara) Lim absolutely knew she wanted to study international relations at Syracuse University, even if she didn’t know where she’d be heading at first. “I got my acceptance letter, and my mom asked me where Syracuse was. I…