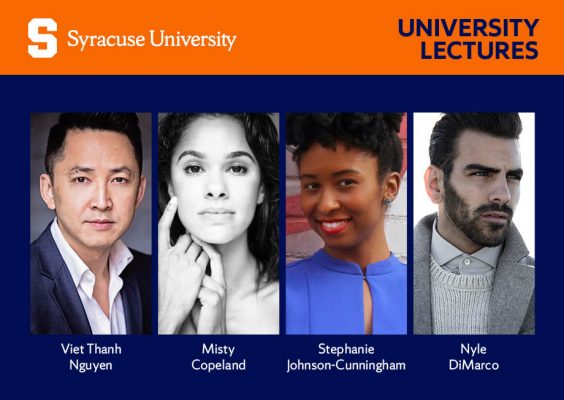 All lectures will begin at 7:30 p.m. EST and (EDT after March 14) and be presented in an interview-style format. Following public health guidance due to the COVID-19 pandemic, this spring’s lectures will continue to be all virtual and viewable via Zoom webinar. Audience members will be able to submit questions for consideration as part of the experience, time permitting. Those attending should register in advance at lectures.syr.edu to receive the Zoom link. Communication Access Real-Time Translation (CART) will be available for each lecture.

Nguyen will be interviewed by Dana Spiotta, award-winning author and associate professor of English in the College of Arts and Sciences (A&S). The lecture is co-sponsored by A&S.

Nguyen and his family came to the United States as refugees from Vietnam in 1975. As he grew up, he observed that movies and books about the Vietnam War only focused on Americans. He turned his writing toward lifting the voices and perspectives of the Vietnamese.

His debut novel, “The Sympathizer,” won the Pulitzer Prize (2016), the Dayton Literary Peace Prize and was a finalist for the PEN/Faulkner Award. The New York Times says that the novel “fills a void … giving voice to the previously voiceless while it compels the rest of us to look at the events of 40 years ago in a new light.” His follow-up novel, “The Committed,” is due to be published this year.

Nguyen is also the author of “Nothing Ever Dies: Vietnam and the Memory of War,” a finalist for the National Book Award, and “The Refugees,” a collection of short stories. In 2018, he joined with 17 fellow refugee writers to create “The Displaced,” with proceeds supporting the International Rescue Committee.

He is the recipient of a MacArthur “Genius” Grant. Nguyen teaches at the University of Southern California and works as a cultural critic-at-large at the Los Angeles Times.

Copeland will be interviewed by Broadway and television actress Shanel Bailey ’19. The lecture is co-sponsored by the Office of Multicultural Advancement.

Copeland began her ballet studies at 13, and at 15 won first place in the Music Center Spotlight Awards. She studied at the San Francisco Ballet School and American Ballet Theatre’s (ABT) Summer Intensive on a full scholarship and was declared ABT’s National Coca-Cola Scholar in 2000. She joined the ABT’s Studio Company in September 2000 and the ABT as a member of the corps de ballet in April 2001.

In August 2007, Copeland became the company’s second African American soloist and the first in two decades. She was promoted to principal dancer in August 2015, making her the first African American woman to ever be promoted to the position in the company’s 75-year history. She made her Broadway debut in the role of “Ivy Smith/Miss Turnstiles” with the critically acclaimed show “On the Town.”

She has performed in a variety of classical and contemporary roles with ABT, including the title role in “Firebird,” Clara in “The Nutcracker,” Odette/Odile in “Swan Lake” and Aurora in “Sleeping Beauty.”

She holds a number of honors and endorsements, but has found her passion in giving back. She was named National Youth of the Year Ambassador for the Boys & Girls Clubs of America in 2013, and was appointed to the President’s Council on Fitness, Sports and Nutrition by President Obama in 2014. She has been a Turnaround Arts Ambassador since 2016, representing the Gregory Jocko Jackson School in Brooklyn.

Copeland received an honorary degree from the University of Hartford in 2014 for her contributions to classical ballet and for helping to diversify the art form.

This lecture is also the keynote to “Deaccessioning After 2020,” a two-day virtual symposium that aims to comprehensively address collections and deaccessioning in the context of the economic fallout of the pandemic and the national call to rethink the role and responsibilities of museums and their collections in an increasingly diverse and complex world. The symposium’s agenda reflects a broad set of perspectives and taps experts from across the art and museum world, from directors and trustees, to seasoned museum professionals, scholars, legal experts, artists, auction houses, journalists and influencers. The symposium is co-sponsored by the Graduate Program in Museum Studies and the College of Law.

Johnson-Cunningham is an agent for arts and culture who centers cultural equity as an essential part of achieving social justice. She co-founded and serves as director of Museum Hue, an organization supporting Black, Indigenous and other People of Color (BIPOC). She built the first online directory and system to map BIPOC museums across the United States. She is currently working on a larger cultural mapping project specific to New York City with support from the city’s Department of Cultural Affairs.

As a United Nations Human Rights fellow centering on arts and culture, Johnson-Cunningham applies the U.N.’s ratification of cultural rights to her work to call for greater recognition and representation in the arts ecosystem. She received the Americans for the Arts 2019 American Express Emerging Leader Award for her work.

She has also hosted and produced “On Display,” a show for WNET’s ALL ARTS Network that focuses on ways museums are readdressing societal issues that resulted from intersecting histories and connect to contemporary life. Each episode covers various topics including immigration, mass incarceration, transportation and preservation of Black cultural spaces.

DiMarco will be interviewed by Kate Corbett Pollack, coordinator for Syracuse University’s Disability Cultural Center (DCC). The lecture is co-sponsored by the DCC and the Barnes Center at The Arch. CART and American Sign Language interpretation will be available for this lecture.

DiMarco is a deaf activist and ambassador for the deaf community. He won the mirror ball trophy on ABC’s “Dancing with the Stars” (season 22) and was the last model standing on The CW’s “America’s Next Top Model” (cycle 22).

Born into a multigenerational deaf family, he is an honorary spokesperson for Language Equality and Acquisition for Deaf Kids (LEAD-K) and founder of the Nyle DiMarco Foundation, which works to improve the lives of deaf people around the world. DiMarco produced the 2018 return to Broadway of “Children of a Lesser God” and was a creative collaborator on The ASL App, created by native deaf signers to teach conversational American Sign Language.

With a passion for language, literacy and advocacy within the deaf community and beyond, DiMarco shares his barrier-breaking story as a deaf man who has risen above stereotypes to take the world by storm. Believing that his deafness is “an asset rather than a limitation,” he builds a bridge between the deaf and hearing by shining a light on not only the struggles, but also the triumphs of the deaf culture.