Bringing seven decades of nineteenth-century Black organizing to digital life is the mission of the Colored Conventions Project (CCP). Co-founded by faculty director P. Gabrielle Foreman, the CCP is a scholarly and community research project focused on digitally preserving Black political activism from the 1830s to 1890s, some of which occurred in this region, near Syracuse University and across Central New York. 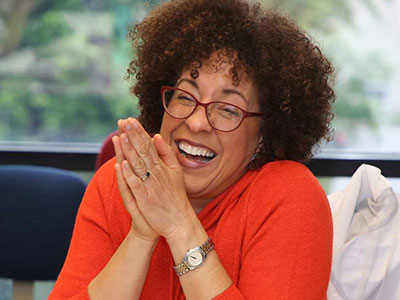 Over the course of these seven decades, Black men and women traveled to attend meetings advertised as “Colored Conventions.” These political gatherings offered opportunities for free-born and formerly enslaved African Americans to organize and strategize for racial justice. Leaders of the abolitionist movement, including Frederick Douglass, took part in some of these assemblies in Central New York and beyond. For instance, the National Convention of Colored Men, held in October 1864, convened leading abolitionists, including Douglass, at the Wesleyan Methodist Church (still standing in downtown Syracuse). At that convention, organizers presented the Bill of Wrongs and Rights, a document outlining inequalities faced by African Americans. The CCP digitizes documents like these, along with period images related to the Colored Conventions Movement, to create interactive online exhibits which provide insight and understanding of early Black organizing for scholars and interested citizens alike.

The Humanities Center welcomes Foreman, an award-winning educator, scholar, and activist known for her work in Black digital and public history and in African American literature, as the 2021 Jeannette K. Watson Distinguished Visiting Professor in the Humanities. In addition to her leadership of the CCP, Foreman is professor of English, African American studies and history, and an endowed chair in liberal arts at Pennsylvania State University. Her virtual residency begins with a 3-way dialogue on February 11, “Looking Back, Looking Forward: Choices, Careers and Living Black History.” Renowned historians Daina Ramey Berry (University of Texas at Austin) and Erica Armstrong Dunbar (Rutgers University) will join Foreman for a lively discussion, moderated by Shirley Moody-Turner (Pennsylvania State University). They will explore how, in their innovative scholarship and in their sustained advocacy for change in the academy, they each center Black women’s lives, resistance, and intellectual contributions. This dialogue is the first of four events that make up Foreman’s spring residency. Find the full list of opportunities and information on how to register.

Vivian May, director of the Humanities Center and of the Central New York Humanities Corridor, who is also professor of women’s and gender studies, says each of Foreman’s events will take up key questions of what it means to pursue justice, in one’s academic field and body of research, but also in community and collaboration with others.

“Foreman is a remarkable collaborator and publicly engaged scholar,” says May. “Her leadership and work with the Colored Conventions Project illuminate how the humanities, including Black digital humanities projects, are pivotal to making change.”

Last February 14, on Frederick Douglass Day, dozens of volunteers at Syracuse University helped contribute to the CCP’s effort to digitally preserve Black history. Through a collaboration between the Humanities Center and the CCP, volunteers at Syracuse joined over 600 people across the United States to transcribe the writings of early Black feminist educator, activist and author Anna Julia Cooper (1858-1964). They used computers to read and type up her papers, notes, diaries, newspaper articles and more into a digital database for future generations to enjoy and learn from. Over 1,700 materials were digitized during the event, helping researchers and scholars discover new aspects of Cooper’s life’s work.

Digitizing these historical materials, and making them readily available via CCP’s two websites—their main site and their new digital records site—­is key, says May. “It democratizes access to this knowledge base and raises awareness of longer histories of civil rights organizing,” she adds. “A new edited volume about these Conventions (to be highlighted in an April event as part of Foreman’s spring residency), will deepen understandings about this political history and these texts, as well.”

“We knew that Foreman’s cutting-edge work in establishing the Colored Conventions Project, which includes quite a few Conventions held in Central and Western New York, would be ideal. The Watson professorship is a sustained visit that will allow time to discover the many facets of her work,” says Beam. “Foreman really makes us understand the full ramifications of the recovery work she does in Black history, bringing to greater light and accessibility seven decades of organized Black political work in the nineteenth century.”

Petrina Jackson, who attended Foreman’s talk and workshops on the CCP, held at the University of Iowa when she was head of Special Collections and University Archives at Iowa State University, says Foreman’s work shines a light on the values, strategies, and support systems Black activists, including women, used in their advocacy.

“Not only will those who participate in Professor Foreman’s residency become acquainted with the amazing stories of Black men’s and women’s early movement for full citizenship, but they will also witness her fierce advocacy for Black students and their success in an academic system that was not designed for them,” notes Jackson.

The Evolution of Colored Conventions

At this spring’s culminating event for Foreman’s residency, Joan Bryant will join Foreman, Jim Casey (Pennsylvania State University), Derrick R. Spires (Cornell University) and Psyche Williams-Forson (University of Maryland) to discuss the history of early Black organizing during a virtual panel. Each is a contributor to “The Colored Conventions Movement: Black Organizing in the Nineteenth Century,” an important new volume of essays focusing on the nineteenth century’s longest campaign for Black civil rights which was the prequel to the NAACP, Civil Rights, and Black Lives Matter movements.

In the book, Bryant’s essay analyzes an early period in Colored Convention history that she refers to as “the gap years.” Bryant explains how a small set of delegates brought the annual national gatherings to a temporary halt in the 1830s as they tried to redefine what it meant for Black people to work as American reformers.

“The group prompted struggles over the meanings of race, which they viewed as a discourse that invented and sustained whiteness as a category of privilege,” she says. “I argue that the debates of this period explain how ideas about race informed the evolution of antebellum (pre-Civil War) and postbellum (post-Civil War) Colored Conventions.”

Bryant expects panelists to engage in a range of topics, including: resources offered by the CCP for understanding the conventions; how digital tools have made convention records accessible to general audiences, facilitated discoveries of previously unknown conventions, and fostered new interpretations of convention participation and networks; and how African American print culture informed the evolution of Colored Conventions.

The virtual panel, titled “Why Didn’t We Know?! Seven Decades of 19th-Century Black Political Organizing” will be held on April 16 from 2 to 3:30 p.m. Registration is open through April 14.

“I look forward to opportunities the residency can offer to connect contemporary Black Lives Matter activism and Black visibility in ‘official’ politics to a long reform tradition of using media networks to promote Black self-determination and collective action,” Bryant says. “Given Gabrielle’s talents and commitments, I also think her visits will inspire a diverse array of students, faculty, staff, and administrators to reflect on ways that technological conventions mediate and document how they function as individual political actors.”

The Jeannette K. Watson Distinguished Visiting Professorship in the Humanities was established by the Watson family to support on-campus residencies of prominent humanities scholars, writers and artists.