Devon Patton ’94 will serve as emcee for the 36th annual Rev. Dr. Martin Luther King Jr. Celebration, which will take place online on Sunday, Jan. 31, at 7 p.m. ET, Patton is a news anchor with Spectrum News.

“Devon Patton is not only a gifted and respected public figure but also a beloved graduate of Syracuse University,” says the Rev. Brian Konkol, dean of Hendricks Chapel and co-chair of the organizing committee. “As we prepare for a memorable celebration in the midst of these challenging times, we are elated that he accepted our invitation to participate. His presence will contribute toward a meaningful celebration.” 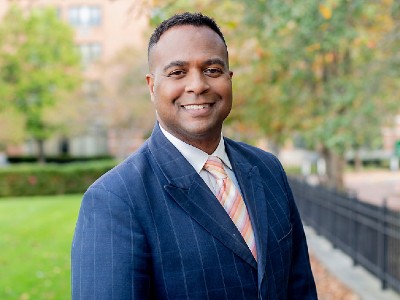 Patton embraces the role of emcee and appreciates the event’s meaning and timeliness. “What an amazing coincidence that we are celebrating Dr. Martin Luther King at a time when we need more unity and non-violent voices,” says Patton. “Dr. King was all about people coming together in a non-violent way and not just with people who look like each other or think like each other.”

Registration for the 36th annual Rev. Dr. Martin Luther King Jr. Celebration is now open and free to all at mlk.syr.edu.

Ruby Bridges, one of the first African American students to attend an all-white elementary school in the South, will serve as the keynote speaker. Bridges will reflect on Dr. King’s work, as well as the impact of education in sparking and sustaining social change. Additionally, the event includes student and community performances, as well as the presentation of the Unsung Hero Awards.

Patton graduated from Syracuse University in 1994 with a bachelor’s degree in speech communication, now communication and rhetorical studies, in the College of Visual and Performing Arts. During his four years at the University, he was a successful athlete with a track and field scholarship. Patton was named Big East Champion in the 400-meter hurdles and qualified for the Olympic trials during his athletic career at the University.

Patton spent the beginning of his professional career working as a programming assistant at WCAU, a NBC station in Philadelphia. He later continued his career working as a photojournalist in West Virginia and North Carolina. His first on-air opportunity was in North Carolina, and he later served in  reporter and anchor roles in Kentucky, Nebraska and Louisiana. Even though Patton has worked all over the country, he feels strongly connected to the Central New York community. He currently lives with his wife and children in Jamesville, New York.

Patton has been a news anchor at Spectrum News for almost three years. He values the importance of storytelling in his profession, and his experience in the television news industry has allowed him to create unique connections within the communities that he has interacted with.