The State of the Immigration Courts

Immigrant rights activists energized by a new Democratic administration and majorities on Capitol Hill are gearing up for a fresh political battle. A coalition of national advocacy groups announced a new campaign to help push through President Biden’s plan to open a citizenship pathway for up to 11 million people. 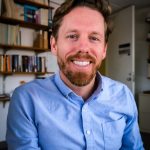 Austin Kocher is a faculty fellow with the Transactional Records Access Clearinghouse (TRAC), a research institute that uses Freedom of Information Act requests to study the federal government. TRAC research noted that when President Donald Trump assumed office, 542,411 people had deportation cases pending before the immigration courts. At the start of 2021, that number now stands at 1,290,766—nearly two and a half times the level when Trump assumed office just four years ago. Waiting in the wings are another 300,000+ cases that President Trump’s policy changes have decided aren’t fully resolved, but have not yet been placed back on the active docket. 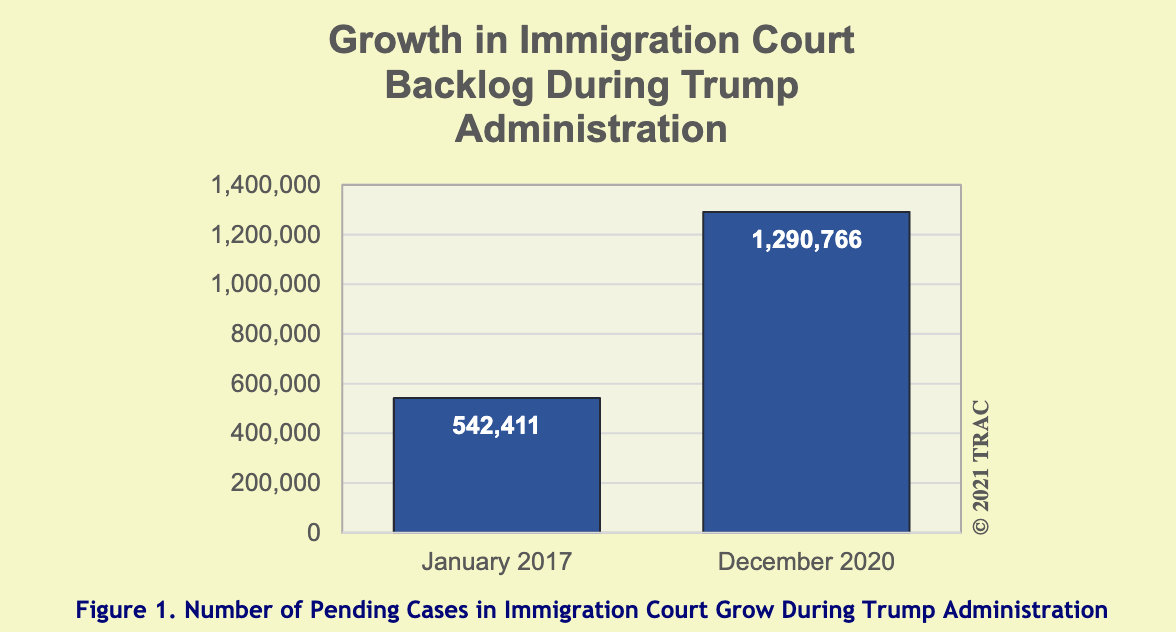 Because of the pile-up of cases, many cases in the backlog were initiated by the Department of Homeland Security (DHS) years ago. Some were initiated by the Immigration and Naturalization Service (INS), before the formation after 9/11 of the DHS. The average wait for a hearing date is now 1,642 days or 54 months. This is based on the average number of days between the date of the Notice to Appear (NTA) and its currently scheduled next hearing date. With the continuing pandemic, it is possible that many hearings could be postponed further. This appears likely to occur until regular hearing schedules resume in all courts. As such, Kocher believes there is no way to deal with this large backlog in the immigration courts without some measure of reform.

“President Biden inherited an immigration court backlog of nearly 1.3 million pending deportation cases—the largest in U.S. history and nearly 2.5 times higher than the last year of the Obama administration. Data suggests that solving this crisis begins in Immigration and Customs Enforcement, not in the courts,” Kocher says. 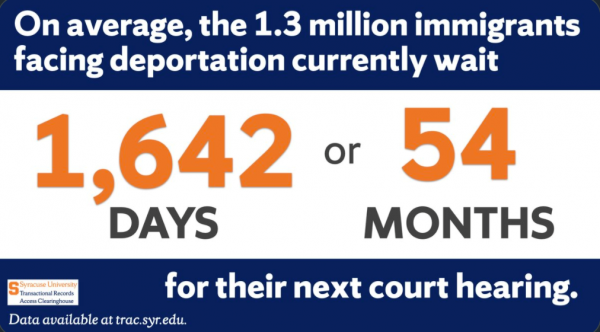 “In recent years, the number of cases in the court backlog has become a kind of barometric reading for the immigration enforcement system. Higher numbers of pending cases puts increased pressure on immigration judges to hastily decide complex cases that often involve life and death decisions. The backlog also leaves immigrants in limbo for years, which may prevent them from obtaining legal status and may keep them separated from their families.”

Where Does the Biden Administration Go From Here?

This report provides a valuable baseline for the public about the state of America’s immigration court system at the start of a new administration. Not only do these data paint a picture of an immigration court overwhelmed by immigration cases from the Department of Homeland Security, most of which do not appear driven by criminal deportability grounds, but these data also illustrate the diverse cross-section of immigrants in the county, many of whom have been in the United States for years. TRAC will continue to monitor changes in the court’s backlog as the first 100 days of the Biden administration unfold, and in the months that follow. A free web query tool, updated monthly, allows the public to monitor these changes by state, immigration court, hearing location and nationality.

To request an interview with TRAC researchers, please contact: