Sidney “Sid” Lerner ‘53, alumnus of Syracuse University and benefactor of the Maxwell School’s Lerner Center for Public Health Promotion, has passed away. 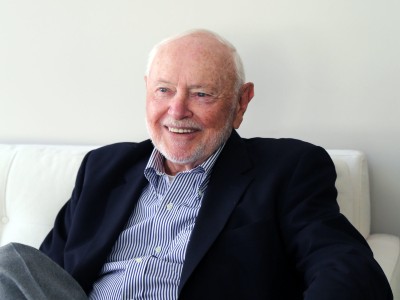 During his career, the legendary advertising executive represented such well-known brands as Maxwell House and Texaco, and created memorable campaigns including “Please Don’t Squeeze the Charmin” featuring Mr. Whipple. Lerner later applied his expertise in advertising and promotion toward improving public health, and in the early 2000s founded the Monday Campaigns—a nonprofit health promotion organization that promotes sustainable behavior change by dedicating every Monday to making positive changes to improve health. In conjunction with Johns Hopkins Bloomberg School of Public Health, Columbia Mailman School of Public Health and Syracuse University’s Maxwell School of Citizenship and Public Affairs, the campaign has grown in the past decade to encompass a number of wellness initiatives focused on helping individuals and organizations start and sustain healthy behaviors.

In 2011, Lerner and his wife Helaine, an environmental activist and philanthropist, joined forces with Syracuse University and the Maxwell School to create the Lerner Center for Public Health Promotion. The center is dedicated to improving population and community health through research, outreach and education focused on the social, spatial and structural determinants of physical, mental and behavioral health.

“Thanks to the generosity of Sid and Helaine Lerner, we have built the Lerner Center into a nationally recognized center for rigorous population health research, student training and community health promotion,” says Shannon M. Monnat, director of the Lerner Center of Syracuse University and Lerner Chair for Public Health Promotion in the Maxwell School. “Sid was truly extraordinary. His enthusiasm for and dedication to improving health will live on through the Lerner Center.”

Over the past several years, the Lerner Center has launched numerous health promotion programs and community partnerships, including the Monday Mile and DeStress for Success, and conducted timely research on pressing population health issues, including the opioid crisis and COVID-19. A national well-being survey that is scheduled to start collecting data in early-February will inform future Healthy Monday initiatives and other health promotion programs for years to come.

“Sid was a talented, energetic and generous spirit, and I enjoyed spending time with and learning from him and Helaine over the past five years,” says David M. Van Slyke, dean of the Maxwell School. “We are grateful for his support of Syracuse University and the legacy he has entrusted us to carry out.”

In 2013, Lerner was honored for his philanthropy with the George Arents award, Syracuse University’s highest alumni honor. To learn more about his life and work, and to view a video from the awards ceremony, please visit the Monday Campaign in memoriam: https://www.mondaycampaigns.org/news/in-memoriam-sid-lerner .