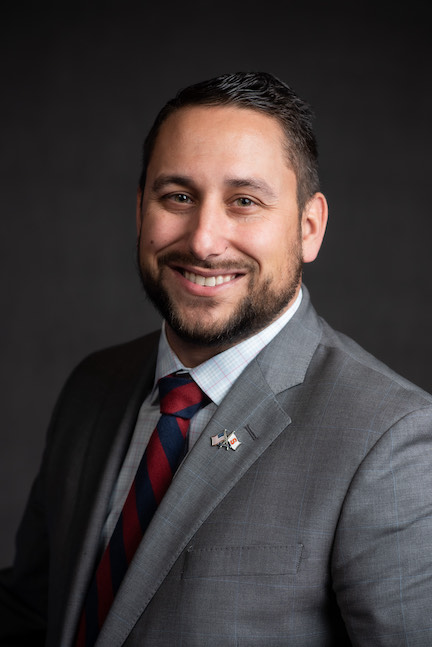 As a Marine combat engineer with the 11th Marine Expeditionary Unit, John Gibson’s job was to identify improvised explosive devices (IEDs) and mines, place and clear obstacles, lay out concertina wire and build bunkers. This essential, physical and tactile combat zone work not only requires close attention to detail but also an understanding of how the lives of fellow servicemembers rely on your skill. The sights, sounds and intense memories of combat left a deep impression on Gibson ’20, one that he invites others to experience through his immersive art exhibition, “A Sapper’s Abyss.”

Gibson’s exhibition—an installation, kinetic sculpture and performance piece in one, titled after the traditional name for a combat engineer—is featured in the December 2020 issue of Wordgathering: A Journal of Disability Poetry and Literature, a digital quarterly journal edited by Diane Wiener, Burton Blatt Institute research professor and associate director of interdisciplinary programs and outreach. The issue also features an interview with the artist.

Originally installed at the ”Warrior Brain + Artist Mind” gallery exhibition hosted by CreatiVets and the School of the Art Institute of Chicago—and now stored at the National Veterans Art Museum—Wordgathering invites viewers to enter the “abyss” virtually, hyperlinking a “walk-through” of the sculpture, the photos and sound files that make up the piece. 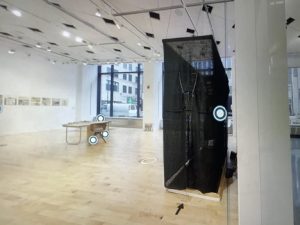 “The whole piece is 4 feet wide by 7 feet long and 8 feet tall,” describes Gibson. “When you first come up to the exhibition, you see wooden frames surrounded by a skirt of black burlap with an entrance on one side and an exit on the other.”

At the entrance, continues Gibson, broken and twisted chains hold open the doors. “The entrance is about 5 feet tall, so you have to kind of duck to get in. Once you’re in, you see dirt, sandbags and combat trash, such as discarded Meals Ready to Eat and little pieces of rubber.”

Bringing this claustrophobic space vividly to life, Gibson has hung a web of fishing line to which are attached 57 photos. “The photos are double-sided, and they are almost spinning, kind of like a mobile,” he continues. “If you touch one, they all move. It gives a kind of ‘Twilight Zone’ feel.” Above the viewer, a spotlight adds to the stark, oppressive atmosphere.

The photos illustrate life for a sapper in an intense combat zone. Some of them are extremely graphic, Gibson notes, showing the havoc IEDs wreak on a body. Their placement and constant motion remind the viewer that veterans must live with these images long after their service has ended. “The photos were donated by Dr. Jon Bowersox, a friend who was a medical officer. He took them and obtained them through a Freedom of Information Act request,” says Gibson.

To these battlefield sights, Gibson has added equally shocking sounds. A pressure plate—not unlike those that set off enemy IEDs—lies hidden in the dirt. If an unsuspecting visitor steps on the plate, one of three bomb blast sounds are triggered along with a flash of a flood light from above. Gibson manufactured the sounds himself, by recording a ball bearing hitting a metal sheet in an empty hallway. “I put different pieces of fabric up and then just let the ball bearings go with elastic, then I manipulated the recordings to make them sound like a rural explosion or urban explosion with up-close reverberation.”

The effect of this sound, vision and tactility is an overwhelmingly sensory experience. It encourages the viewer to walk in Gibson’s scuffed and dusty combat boots into that part of his mind where combat memories have been compartmentalized.

“‘A Sapper’s Abyss’ stands for what happens to old trauma,” observes Gibson. “But I’m also trying to express how this form of compartmentalization is not unique to veterans.” Many people who experience trauma, he observes, have a place in their mind where difficult memories are stored. Of course, trauma survivors can find venturing into such a memory room uncomfortable, and Gibson admits that he has combat veteran friends who “love the project but say ‘I’m not going near it.'”

“While I was putting it together, it was tough,” Gibson adds. “There were a couple of sleepless nights as I put myself back into that space so I could unpack it and translate it in order for another person to experience it. It was a very introspective experience.”

A disability advocate who believes strongly in the healing power of self-expression, since leaving the Marines, Gibson has fostered his artistic talent, his skills as a counselor and future therapist, and his advocacy on behalf of veterans.

When asked why he decided to move from his native California to pursue a bachelor’s degree in social work at Syracuse, Gibson is to-the-point: “Syracuse is the number one private school for veterans, hands down. I really saw that firsthand through the implementation of the DSL program.”

Gibson is referring to the University’s Office of Veteran and Military Affairs Disability Services Liaison program, his “pet project” that allowed him to fully display his passion for helping and supporting veterans. The program ensures veteran students are connected to University and other external resources enabling the student veteran success on campus. As an undergraduate, Gibson also served on the Disability External Review Committee, charged by University Chancellor Kent Syverud to provide policy advice regarding disability culture on campus.

After completing a master’s degree, Gibson says he hopes to divide his time between clinical social work and working for a nonprofit. With military experience in Marine expeditionary units in 13 countries—and visits to seven more—Gibson says where he practices in the future is not as important as the mission.

“Because of this perspective, I have come to understand that team and purpose supersede geography. I mean, I’d love to be somewhere a little bit warmer, but really it’s about the mission and the team,” Gibson says. “If I can have a good mission that I’m passionate about and have a team that’s supportive, I can make a nest anywhere on earth.”