Student Gets Dose of ‘Hope, Optimism and Relief’ with COVID-19 Vaccine

Louis Smith was thrilled when he was named valedictorian of his class at Mynderse Academy in Seneca Falls, about 50 miles west of Syracuse.

A lifelong Syracuse University sports fan, Smith was ecstatic when he received his acceptance letter from Syracuse. 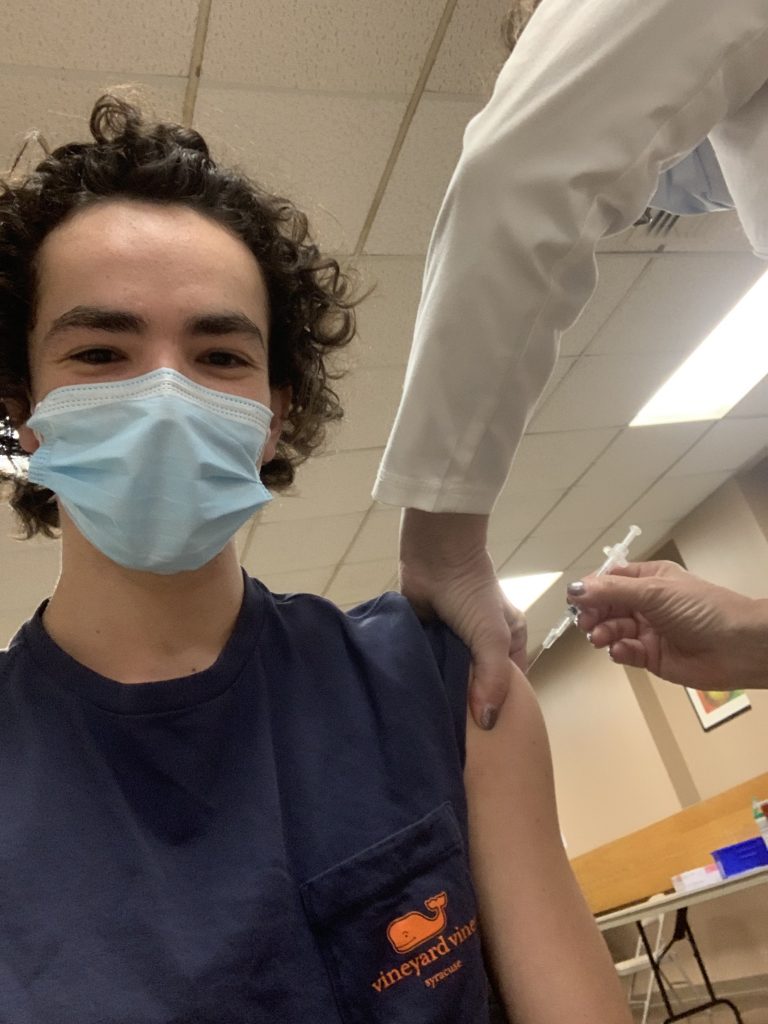 But when Smith received the Pfizer COVID-19 vaccine three days before Christmas, it was a feeling he could hardly describe.

“I couldn’t stop smiling, I couldn’t stop talking about it,” says Smith ’23. “I took a selfie, and the woman who vaccinated me said she had never seen somebody so excited to get a vaccine.”

As an intern at LifeCare Medical Associates in Seneca Falls, Smith has seen the COVID-19 infection rates steadily rise in Seneca County. Smith is acutely aware of the grim national numbers, with America’s death toll from the coronavirus having surpassed 350,000 with more than 20 million cases diagnosed.

And Smith has been personally affected by the virus. Although he was asymptomatic, he tested positive for COVID-19 in mid-September and needed to isolate at his South Campus apartment. Being involved in COVID-19 testing at LifeCare while living at home in Seneca Falls, Smith was relieved to get the vaccine so he can protect his parents, Annie and Bernie Smith; older sister Hannah, who attends St. John Fisher College in Rochester, New York; and younger brother Jacob, a high school senior who was born, Louis Smith noted, on the same day that the Orange won the 2003 basketball national championship.

“What I experienced was a cocktail of positive emotions that day because the world has been so grim and heavy and the vaccine provided a little lift,” Smith says. “It was a dose of hope, optimism and relief that has been so absent.”

Smith, who is majoring in biology and citizenship and civic engagement, is a College of Arts and Sciences’ leadership scholar who was selected to participate in the Renée Crown University Honors Program. He’s also a member of the Syracuse University Senate, an executive board member of the OrangeSeeds first-year leadership empowerment program and an organizer for OttoTHON, a 12-hour dance marathon that raises money for Upstate Golisano Children’s Hospital in Syracuse.

“I was looking for a balance of academics and a social life, and there’s not a better place for both than Syracuse,” Smith says.

When Smith was a senior at Mynderse Academy, he spent a part of every school day shadowing doctors through the New Vision Medical Program at Geneva General Hospital. That’s when he decided to major in biology with the goal of becoming a pediatrician, and this past summer he worked as a medical secretary at LifeCare Medical Associates, a medical practice in the Finger Lakes Health network. 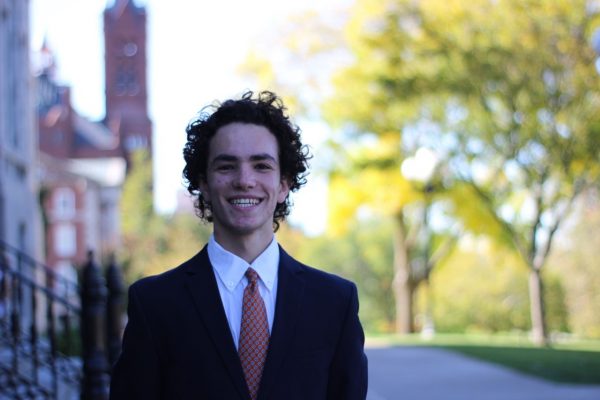 Starting over Thanksgiving, Smith returned to LifeCare and, with COVID cases rising in Seneca County, he was assigned to administer nasal swab rapid tests and determine the results. Smith works from 8 a.m. to 4:30 p.m. daily and tests about one patient every 20 minutes, or about 24 per day.

As a result of his new duties, Smith was approved to receive the vaccine and became part of the first wave of vaccines for health care workers in New York State when he received the shot Dec. 22 at Newark-Wayne Community Hospital, Newark, New York. After a 15-minute observation period to make sure he didn’t have an allergic reaction, Smith drove home and experienced only mild side effects.

“That night my left arm was sore, and when I woke up, I had a headache—nothing crazy or unexpected,” Smith says. “I took some Advil and everything was fine.”

Smith says any reservations he might have had about the vaccine were “washed away” by co-workers at LifeCare who said it was “totally fine.” For those who feel the vaccine arrived too quickly and may not be safe, Smith says they should do their own research on it and, like him, they’ll find the speed at which the vaccines were approved had more to do with funding and the willingness of so many people to participate in trials.

With both the Pfizer and Moderna vaccines, a second shot is required. Smith is scheduled to get his second shot Tuesday at Newark-Wayne Community Hospital, and he can’t wait to experience that feeling.

“COVID has caused so much destruction and pain, and I view getting the vaccine as the greatest revenge we can get on the virus,” Smith says. “And to honor everyone that has passed due to COVID and to keep everyone safe, it’s just the morally just thing to do.”