The ACC InVenture finals feature a $30,000 prize package and is open to undergraduate students or students who have received their undergraduate degree within the past year and who are the original creators, inventors or owners of the intellectual property underlying their invention.

The 2020 Syracuse University campus qualifier winner, Matt Shumer, pivoted his idea for Visos after the ACC finals were cancelled due to the pandemic. Instead, he formed a new team called Otherside AI, working with fellow Whitman School student Miles Feldstein and Syracuse alumnus Jason Kuperberg ’18 through the LaunchPad’s accelerator program. Shumer and his teammates went on to raise $2.6 million this fall to launch Otherside AI. 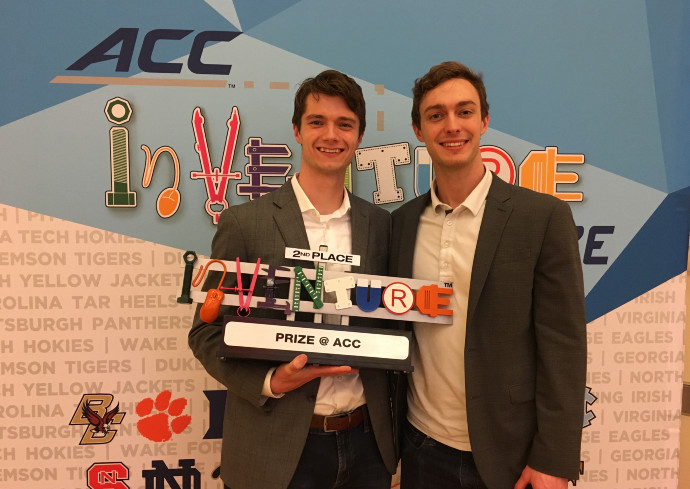 College of Visual and Performing Arts’ School of Design alumni Quinn King ’20 and Alec Gillinder ’20, co-founders of MedUX, won the 2019 campus qualifier competition and the $10,000 second place award in the ACC finals. They developed a medical device through Invent@SU then worked with the LaunchPad to commercialize their venture. Since graduating in May 2020, their wearable, portable intravenous delivery solution venture has taken off and will soon launch commercially.

The 2018 campus qualifier winners, Kayla Simon ’19 and Elizabeth Tarangelo ’19, developed In-Spire, a wearable asthma bracelet which they created through Invent@SU and advanced commercially through the LaunchPad. Simon and Tarangelo used the experience to propel their innovation career paths. Simon, an aerospace engineering major at Syracuse, is now an integration engineer at Relativity Space, building the world’s first entirely 3D printed rocket. Tarangelo, a bioengineering and biomedical engineering major with a focus on neuroscience, is now a clinical specialist with Brain Lab, which develops advanced software-driven medical technology and powers treatment in many surgical fields.

Kate Beckman ’17, G’18 won the 2018 campus InVenture Prize and advanced to the top five finalists in the conference finals at Georgia Tech.  She created Fresh U, a national online publication geared toward college freshmen, growing it to a staff of 300 contributing writers across more than 100 campuses, and developing media partnerships with companies like Teen Vogue. Fresh U was acquired after Kate completed a graduate degree at the Newhouse School. She is now senior content manager for RippleMatch, an intelligent platform for college recruiting.

“I believe that in the modern era, anyone can start a scalable, high-growth company and every metropolitan area should have a thriving startup community,” says M&T Bank Regional President Allen Naples. “By helping Syracuse University host the InVenture Prize Challenge, we’re investing in the exceptional creativity and ingenuity of our students and doubling down on our efforts to build our entrepreneurial community into one that generates jobs and prosperity for generations to come.”