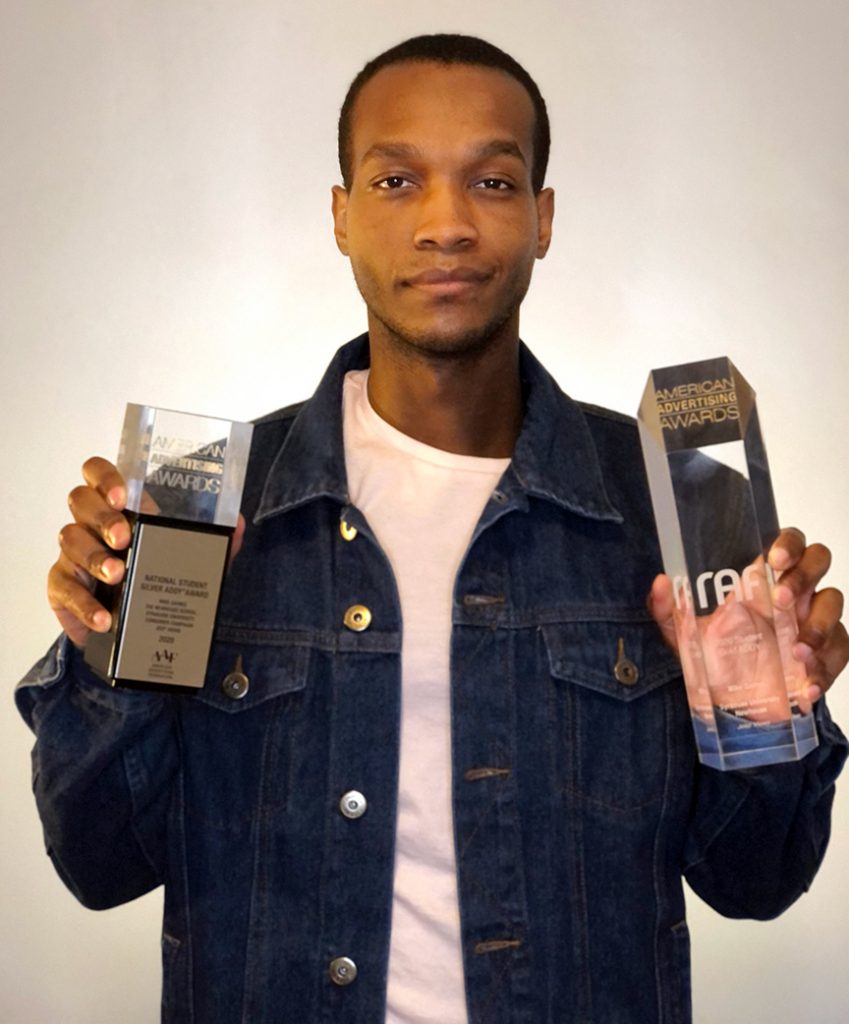 Winning a national ADDY is a remarkable feat, and it takes tremendous skill to create a campaign worthy of national recognition. Mike Gaines ’20 did just that as a student in the Portfolio II course at Newhouse, winning a 2020 Silver National ADDY Award in June for his campaign for Jeep.

The ADDY Awards program is the largest and most comprehensive competition for recognizing excellence in advertising. Sponsored by the American Advertising Federation, the competition includes a student division designed especially for college advertising students.

Gaines was able to create such a compelling car campaign for Jeep without even having his license. He began by researching the driving experience, how people interact with the brand and their attitudes toward the product. He learned what sets Jeep apart from other vehicle brands—the car’s ability to drive over extreme, rough terrain, and that it can literally take drivers anywhere.

From that research, Gaines began thinking of ways to offer a unique perspective on Jeep through many iterations. His award-winning idea featured a billboard with a Jeep grill shape cut out of it, showing views of nature behind it. His print campaign drew from the same model, showing pictures of stunning landscapes in the shape of the Jeep grill.

“I knew that people were really passionate about Jeeps, and there is this kind of cult following over how much Jeep owners love their vehicles,” Gaines says. “But I wanted to show something different—the places Jeep can take you and the things you will see.”

Despite the lack of a license—and a worldwide pandemic—Gaines’ understanding of the brand, and his ability to showcase that understanding in his concept, led him to become the first Newhouse student to win a national ADDY Award.

“It definitely felt great to have your work do its purpose and be recognized by industry professionals,” Gaines says. “But the thing I like about advertising is that it’s nice to see it come to a physical or tangible product in the end, regardless.”

The project, from concepting to the finished award-winning product, came to fruition in the  Portfolio II course, taught by advertising professor of practice Kevin O’Neill.

“The truth is that succeeding the way Mike has is not just about talent,” O’Neill says. “That’s something that people misunderstand about the creative end of the advertising business. Talent is important. But what makes the difference is commitment, the energy you bring to the endeavor, how hard you work. He’s got talent but he’s got this tenacity, which is why I think he’s distinguished himself.”

“I have had Mike as a student in three courses,” says Mel White, professor of practice in advertising. “It was apparent that he had a gift for thinking visually, and his solutions to problems usually ended up in surprising places. His ideas are interactive in nature, engaging the viewer to figure out the idea, no matter what the medium.”

Gaines’ hard work paid off, and he was chosen as one of six students worldwide for the Creative Youngbloods Program at TBWA\Chiat\Day N.Y., one of the most elite agencies in advertising.

Keren Mevorach ’19 and Elaina Berkowitz ’19 won gold at both the local and district levels for their mobile app “Testmoji,” which raised awareness about animal testing by adding wounds and stitches to animal emojis.

Story by Alyssa Hertel, a graduate student in the magazine, newspaper and online journalism program at the Newhouse School