The Bio-Art Mixer: Where Art and the Sciences Meet

Share
College of Arts and SciencesCollege of Visual and Performing Arts

In bio-art, artists and scientists use living tissues, bacteria and organisms to produce intriguing creations. These works are often intended to inspire conversations and action related to the environment, ecology and the effects of human interaction on nature.

At Syracuse University, an interdisciplinary group of faculty have created an event called the Bio-Art Mixer, which brings together professors, graduate students and the general public to share innovative research, foster ideas for new art and research projects, and view new science-inspired art works from leading bio-artists around the world.  The next Bio-Art Mixer is Friday, Dec. 11 at 6:30 p.m. on Zoom, marking the fifth of 2020. The event is open to science and art enthusiasts, and anyone interested in finding out more about this emerging art form. 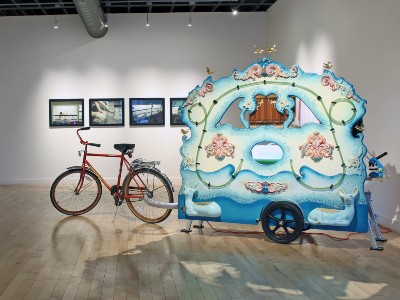 The conversation series was started in 2018 by Heidi Hehnly, assistant professor of biology in the College of Arts and Sciences and Boryana Rossa, associate professor in the transmedia department in the College of Visual and Performing Arts (VPA). Rossa is an interdisciplinary artist and curator who works in the fields of electronic arts, film, video, performance and bio-art. Hehnly is a cellular biologist who specializes in studying the mechanics of cellular division and how and when cells in the body choose to divide.

A collaboration between Rossa and Hehnly on a project by Rossa titled The Mirror of Faith, which premiered in 2019 at GARAGE Museum of Contemporary Art in Moscow, inspired the Syracuse Bio-Art Mixer. The bio-art work centered on the hypothetical existence of a gene that confers faith, bringing about conversations and questions about the future of genetics. Hehnly helped Rossa execute scientific aspects of the exhibit, and out of that partnership came the Bio-Art Mixer–an event where a scientist and artist would each present their research in a cross-disciplinary way in an effort to spark collaboration. 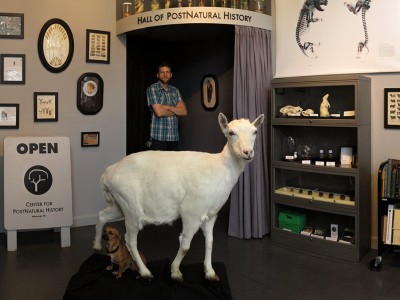 Curator Richard Pell at the Center for PostNatural History (CPNH.)

The mixer was typically held in Syracuse but transitioned to a fully online format due to the pandemic. The virtual connectivity has resulted in a larger viewing audience and an opportunity to connect with international bio-artists from their own labs and museums.

Friday’s mixer will feature talks by artist Jennifer Willet, associate professor in the School of Creative Arts at the University of Windsor; Richard Pell, curator at the Center for PostNatural History (CPNH) in Pittsburgh; and Joseph Paulsen, assistant professor of physics at Syracuse University. The evening will conclude with a discussion moderated by Ed Morris, instructor and co-director of the Canary Lab in VPA’s Department of Transmedia.

Jennifer Willet is founder and director of INCUBATOR Lab, an art/science research laboratory and studio in downtown Windsor, Canada. In her presentation, Willet will introduce the audience to the INCUBATOR Lab facilities, research methods and will highlight a few of her artworks produced within this research laboratory framework. Her work resides at the intersection of art and science and explores the relationship between people and organisms within the lab and outside of it, looking at the responsibilities humans have to the environment and the effects of their interventions on nature. One example of her work is The Great Lakes Algae Organ, a bicycle propelled street organ that plays music and grows and displays living algae. She uses the organ as a talking point to discuss algae’s roles as a superfood, as the largest producer of oxygen in the atmosphere, as a possible source of biofuel and as an invasive species in the Great Lakes.

As curator at the Center for PostNatural History, Richard Pell collects living, preserved and documented organisms such as bacteria, animals and plants of postnatural origin,–e.g., those that have been intentionally and genetically altered by humans through selective breeding or genetic engineering. The CPNH operates a permanent museum in Pittsburgh, Pennsylvania, and has been featured in publications including National Geographic, Nature Magazine, American Scientist, Popular Science, New Scientist, The Guardian and Wired. In his presentation, Pell will highlight a selection of the organisms in the CPNH and talk about some of the international exhibitions he has been a part of. 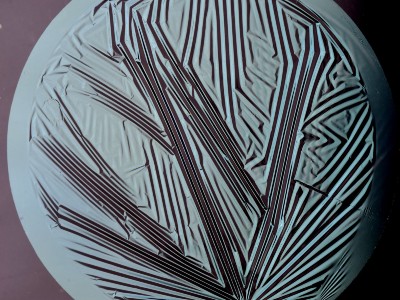 By studying the size and arrangement of wrinkles on thin plastic films, Syracuse physicist Joseph Paulsen gains important insight about other materials including textiles, biological tissues and synthetic skins.

Physicist Joseph Paulsen researches soft condensed matter; elasticity and geometry of thin sheets; and self-organization in disordered materials. His lab’s research on soft materials was recently featured in the journal Physical Review X. In that paper, his group explored how to produce and reproduce crumples on a plastic balloon, which could be important for real life applications like designing a synthetic skin or trying to understand the mechanics of biological tissue. By studying things as simple as a crinkled candy wrapper or a birthday balloon, Paulsen says researchers can learn things that are important for designing deployable satellites or understanding ripples in a cell membrane or the earth’s crust. In his presentation, Paulsen will discuss how his lab generates wrinkle patterns and how those patterns uncover new physical principles.