Students, Faculty to Use Immersive Media to Explore the Complicated History—and Future—of Syracuse’s I-81 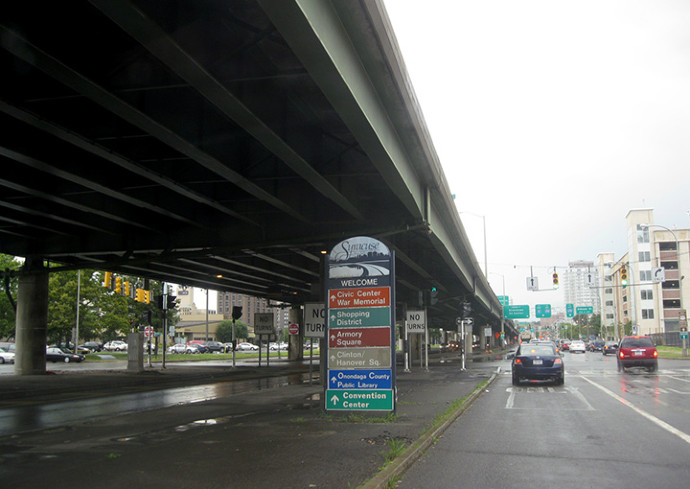 Interstate 81 runs through Syracuse, just down the hill from campus.

The construction of Interstate 81 in the 1960s cut through the city of Syracuse, leaving a wound that still pains the community five decades later.

With newly secured funding from the Journalism 360 initiative, a team of Newhouse School students and professors will explore Syracuse’s I-81 story using immersive media tools.

Headed by Dan Pacheco, Peter A. Horvitz Endowed Chair in Journalism Innovation, the team will use 360 photos, 3D models and photogrammetry—a process that converts photographs taken from multiple angles into three-dimensional views for virtual and augmented reality—to “help Syracuse residents visualize the past, present and future of the land occupied by the I-81 overpass,” Pacheco says.

A viaduct—and a community lost

Part of the Interstate Highway System built in the years following World War II, I-81 in Syracuse was constructed in three stages between 1959 and 1969. The final section, a 1.4-mile elevated viaduct, was constructed on top of Syracuse’s 15th ward, located just west of the Syracuse University campus. The predominately Black, impoverished neighborhood was decimated as a result; some 1,300 people were displaced, businesses were ruined and a once-thriving community was forced further into poverty.

As the highway reached the end of its usable life, the controversy was reborn as Syracuse residents, as well as city, county and state leaders, struggled to agree on how to replace the viaduct. Last summer, the New York State Department of Transportation submitted a proposal to the Federal Highway Administration which outlines options for tearing down the viaduct and replacing it with a community grid, or replacing the viaduct. The state prefers the community grid option.

The Newhouse project is one of 12 projects to receive a total of $100,000 in funding through the Journalism 360 Challenge. The challenge, a joint initiative of the John S. and James L. Knight Foundation and Online News Association, seeks to help develop and expand best practices in immersive journalism. The winning projects were selected from more than 100 applications that addressed the question: How might we experiment with immersive storytelling to advance the field of journalism?

The Newhouse team will receive $6,410 to test, refine and build their project, titled “The Racial Divide: How I-81 Ripped Apart Syracuse’s Community Fabric.” This amount is supplemented by the school’s previous immersive media technology investments, including 8K video cameras and professional photogrammetry software. Pacheco, as Horvitz Chair, plans to match the gift amount with additional equipment.

“This project will provide an extraordinary opportunity to train the next generation of journalists at the Newhouse School in not only the tools, methods and technical steps, but also the significant impacts that experiential storytelling can offer,” Pacheco says. “Tying historical context to place is a powerful way to build understanding and empathy. That can change the way people see each other, and affect their decisions in the present. We hope this story, which will let people see what the I-81 decision did to communities of color, serves as a poignant reminder that the roots of inequality and racism are all around us, even in our daily commutes.”

The I-81 project will be part of a larger, year-long reporting project examining the history and current issues of inequity in Syracuse, at the University and across Central New York. The reporting project is being produced by Newhouse students and faculty in conjunction with The NewsHouse, the school’s student-run multimedia news site, and The Stand, Syracuse’s South Side community newspaper.