David Prince, Curator of the Art Museum, to Retire in January 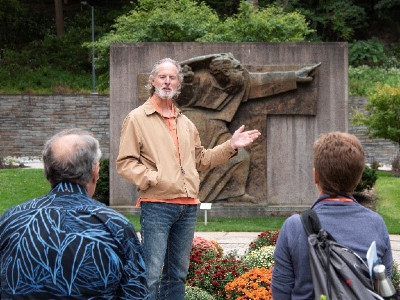 The Syracuse University Art Museum of Art announced that David Prince, the museum’s curator, will retire on Jan. 4.

During his 34 years of service to the museum and the University, Prince introduced thousands of students, faculty, staff  and community visitors to the museum’s permanent collection.

Through his outreach and teaching, he provided important access tools to examine art in detail and engage in important dialogues across campus and the wider central New York community.

Prince earned a B.A. in art history from the University of Massachusetts, Amherst, in 1977. He received an M.F.A. in museology from Syracuse University in 1982, where he completed his graduate thesis on the artwork of Skaneateles-based artist John Barrow, bringing new attention to the American artist considered a “second generation” Hudson River School style artist.

Three years later, Prince returned to his graduate school alma mater and began his professional career at the then Syracuse University Art Collection (now Syracuse University Art Museum) as curator. That same year, Prince embarked on what would be a 20-year teaching appointment in the College of Visual and Performing Arts where he taught Intro to Museum Studies and Curatorship courses in the Museum Studies Graduate Program. In 2017, he revisited his teaching with a special six-week course offered through University College exploring the Etching Revival.

Additionally, over the years Prince has presented an extensive amount of public and University course connected tours and special displays, and was the museum liaison to faculty in integrating the permanent art collection in their curriculum and teaching.

Sascha Scott, associate professor of art history, says, “It has been a pleasure to work with David Prince over the last ten years. He has been dedicated to giving art history students at all levels hands-on experience with art objects, working with them as they write papers, wall labels, and curate shows. He has been generous with his time and encouraging of the many ideas me and my students have brought his way. I will truly miss having him as a colleague.”

During his tenure, he curated or co-organized numerous exhibitions, including “Water & Light: James McNeill Whistler’s Etchings and Drypoints of Venice and Amsterdam,” Winslow Homer’s “Empire State: Houghton Farm and Beyond,” “Jeff Davies: Straight from the Heart” and “Forbidden Fruit: Yasuo Kuniyoshi’s America.” Prince is currently curating his final exhibition as a staff member, “The Howling Infinite:  Moby Dick, Art, and the Environment,” which will premiere as a virtual exhibition on the museum website in January.

Vanja Malloy, director and chief curator, says, “Since arriving at Syracuse University in 2019, I’ve had the privilege of working with David on his last curatorial project at the museum. David’s enthusiasm for cross-disciplinary research and love of art has shined through in this project. He has a remarkable ability to connect with people and applies his love of the arts to forge new collaborations across campus that generate discussion and excitement. I am very excited for this exhibition to launch virtually next spring semester!

“David has been an important presence at Syracuse University for over 34 years and he will be greatly missed. All of us at the museum wish him the very best in his retirement and hope that it is filled with many great memories and adventures!”