In celebration of veterans, the University recognizes the experiences and stories of student, faculty and staff, and alumni veterans. These stories are just some of the many from among the veteran and military-connected community members on campus whom the University is dedicated to supporting. 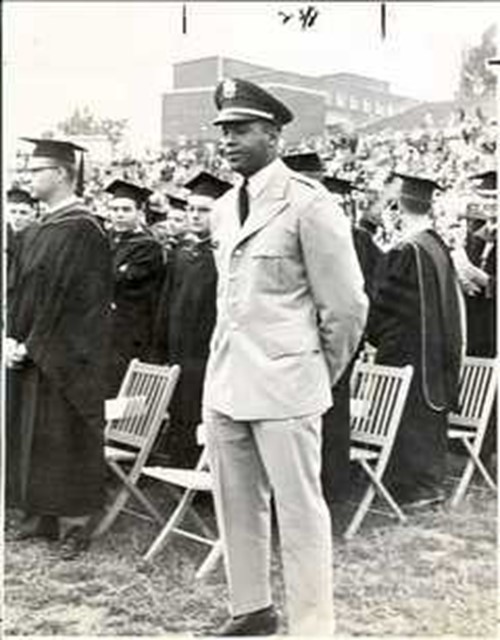 While Ernie Davis ’62 attended Syracuse University more than 60 years ago, he remains a campus legend who broke barriers as the first African American to win the Heisman Trophy. While he is known as a football star whose life was cut short by his battle with leukemia, many aren’t aware that Davis has a connection to the military as well. When he wasn’t busy playing football, he was a candidate in the University’s Army ROTC program and was commissioned as a second lieutenant following graduation. Due to his illness, he never got the chance to serve his nation outside of the ROTC program.

Davis began his journey to Syracuse University and the Orange football team when he began playing in high school at Elmira Free Academy in Elmira, New York. There, he was an immediate athletic standout, earning a total of 11 varsity letters in football, basketball, and baseball and was named All-Conference, All-State, All-Eastern and All-American. And while he was offered scholarships from several universities, he ultimately chose to attend Syracuse—thanks in part to another Syracuse football legend, running back Jim Brown.

“I wanted to play in the big time,” Davis said, “and a lot of people, including Jim Brown, persuaded me that I’d have better opportunities there.”

Arriving to campus in the fall of 1958, Davis majored in economics and finance and became a brother of the Sigma Alpha Mu fraternity. He played football with the freshman team and was a dominant force in practice and scrimmage, which earned him the attention of the varsity team. He joined the team as a sophomore and donned number 44, helping the team go undefeated during his first season and earning MVP in the championship-winning 1960 Cotton Bowl Classic. He earned the nickname, “The Elmira Express,” due to his size, power and speed at 6-feet 2-inches and 210 pounds. 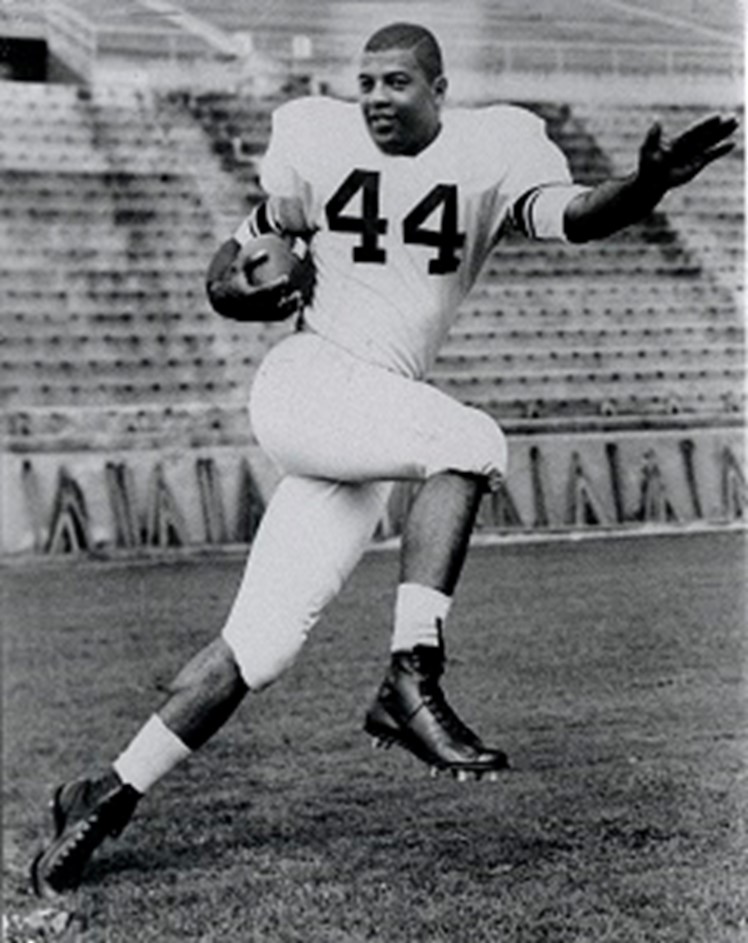 During his junior and senior years, Davis went on to earn two All-American honors and break records for total yardage, rushing, scoring and touchdowns. During the Liberty Bowl in Miami during his senior season, Davis gave another MVP performance by earning the team 15 points in one run, taking them to a 15-14 lead and winning the game. At the end of the season, he was picked by the Touchdown Club to earn the Walter Camp Memorial Trophy as the top college player of 1961.

One of Davis’ many great accomplishments was winning the Heisman Trophy at the end of his senior season. On Dec. 6, 1961, Davis won the award, becoming first African American in history to be honored as the best college football player in the country, even though blacks had participated in the game since the late 1800s. As a Heisman Trophy recipient, Davis received a message from President John F. Kennedy:

“Seldom has an athlete been more deserving of such a tribute. Your high standards of performance on the field and off the field reflect the finest qualities of competition, sportsmanship and citizenship.  The nation has bestowed upon you its highest awards for your athletic achievements. It’s a privilege for me to address you tonight as an outstanding American, and as a worthy example of our youth. I salute you.”

Following his college football career, Davis was the number one pick in the 1962 National Football League (NFL) draft and was initially selected by the Washington Redskins. He was ultimately traded to the Cleveland Browns, where he joined his Syracuse football predecessor Jim Brown. 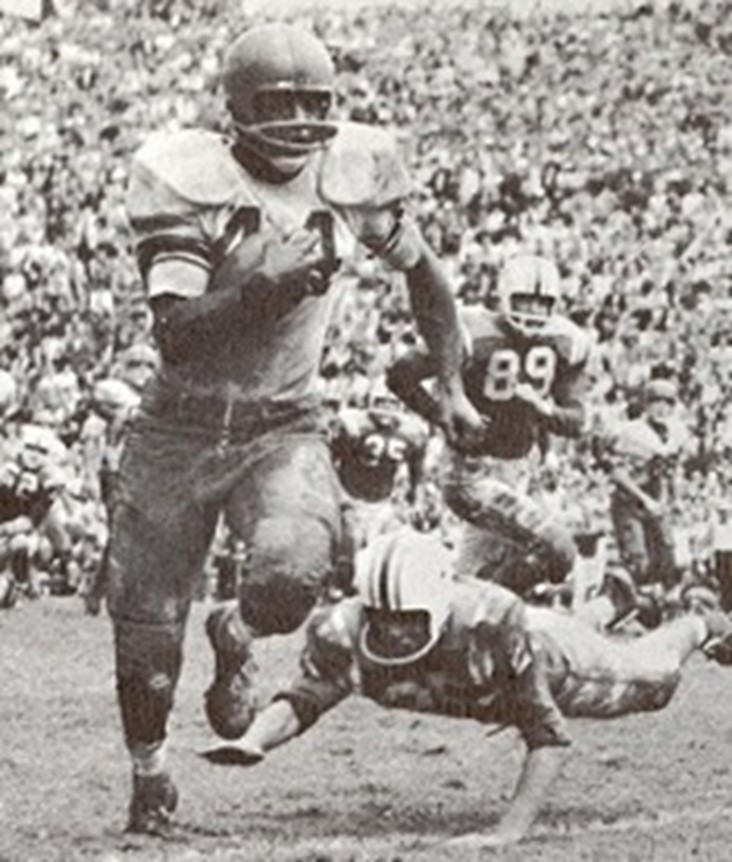 Then, in 1962, Davis was diagnosed with leukemia just months into his professional football career. He remained active while battling his illness, attending every Cleveland Browns practice, helping to recruit future number “44” Floyd Little for the Syracuse University football team, working as a marketing trainee for Pepsi-Cola Co. and even joining the Cleveland Browns off-season basketball team to stay fit. He passed away on May 18, 1963, at the age of 23.

Even though he passed away too early, Davis is one of Syracuse University’s most legendary alumni. He was posthumously elected to the National Football Foundation and College Hall of Fame in 1979. On campus, his memory lives on at Ernie Davis Hall, a residence that houses 250 students.

Just two months before his death, Davis wrote an article for the Saturday Evening Post about his battle with leukemia. “Some people say I am unlucky. I don’t believe it. And I don’t want to sound as if I am particularly brave or unusual. Sometimes I still get down, and sometimes I feel sorry for myself. Nobody is just one thing all the time,” he said. “But when I look back I can’t call myself unlucky. My 23rd birthday was December 14. In these years I have had more than most people get in a lifetime.”

Jared Lyon, president and CEO of Student Veterans of America, and His Journey to Syracuse University and Beyond 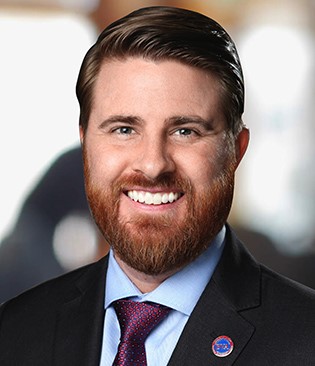 Jared Lyon G’13, president and CEO of Student Veterans of America (SVA), has dedicated his life to ensuring that student veterans and military-connected students achieve their greatest potential through higher education. His journey began in 2001 when he joined the U.S. Navy.

“I had an intense desire to be part of something bigger than myself,” Lyon says. “I joined the Navy in August of 2001 during peacetime. All of that changed after 9/11 while I was in bootcamp. At a time when many in my generation were wondering what they could do to help, I knew I was exactly where I needed to be.”

Lyon served for four years on a submarine contract, primarily as a battlestations helmsman and diver aboard the U.S.S. Alexandria, a nuclear attack submarine. Following his active duty service, he joined Northrop Grumman in a defense contracting position while attending community college full-time at night. Then, he began working for Major League Baseball in a position with the Washington Nationals baseball team as the manager of Florida operations.

“When it came time to decide what was next for me, I knew that going to school was a priority,” Lyon says. He went on to attend Florida State University full-time, and there, he became heavily involved in advocacy work for fellow student veterans. On an advisory committee to the president of the university, Lyon met Randy Blass, an Air Force veteran who told him about a new initiative for veterans and military families coming to Syracuse University.

“Dr. Blass told me about this interdisciplinary research institute—what is now the Institute for Veterans and Military Families—that was going to be led by his colleague Dr. Mike Haynie [vice chancellor for strategic initiatives and innovation and executive director of IVMF],” Lyon says. “Back then in 2011, a lot of people were talking about what they wanted to do for veterans in our country. Dr. Haynie was putting action behind his words and I knew I wanted to be a part of it.”

“The job description said you need a bachelor’s degree, and I was still a student at the time. I didn’t know that I could indicate my expected graduation on the job application,” Lyon says. “Dr. Blass’ mentorship was key to giving me the knowledge and confidence I needed to apply.” 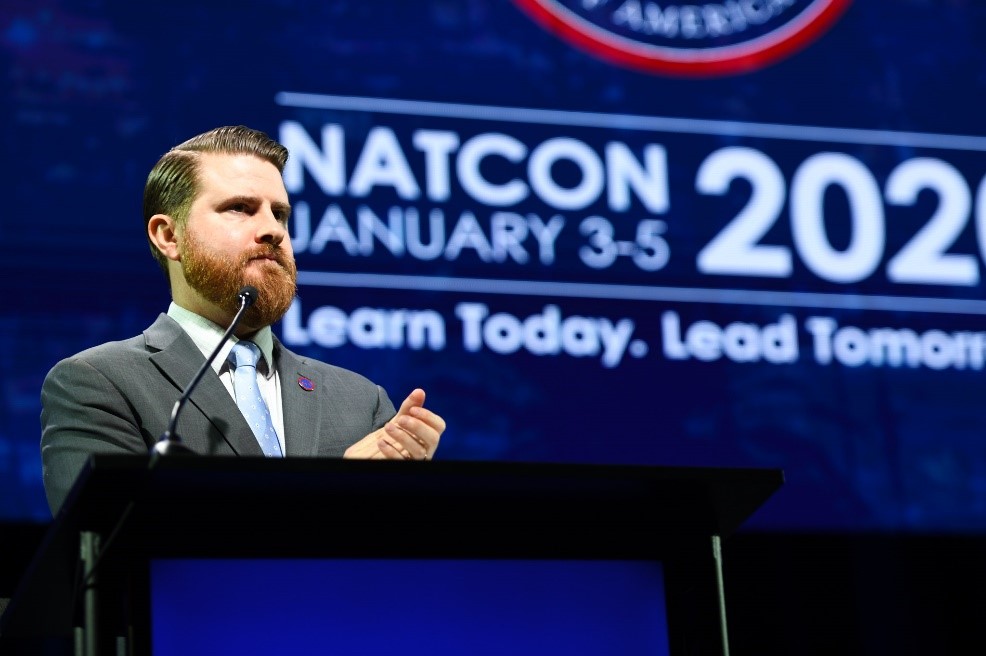 Jared Lyon speaking on behalf of Student Veterans of America at the organization’s annual meeting, NatCon 2020.

Lyon packed up for Syracuse with his now-wife and went on to manage the EBV programs, which are available at eight universities across the country. He began working with the Student Veterans Organization (SVO) on campus, helping connect members to IVMF resources so students could benefit from the institute’s programs as well. “Dr. Haynie gave me the ability to follow my passion to empower student veterans,” Lyon says.

While working with IVMF, Lyon knew he wanted to attend graduate school. “I was intimidated knowing that the Maxwell School is the best public affairs school in the country,” Lyon says. His mentors, including Haynie and Professor of Practice Robert Murrett in the Maxwell School, encouraged him to apply.

“Getting that acceptance letter was one of my proudest moments,” he says. “I remember sitting at orientation and questioning how I got here. Attending Maxwell was a profoundly impactful experience.”

While pursuing a master of public administration degree, Lyon took classes on such topics as fundraising and financing for nonprofits—both of which help him in his current role at Student Veterans of America. Lyon leads the organization’s efforts to empower student veterans using the transformative power of higher education. Since he took office in 2016, Lyon has overseen SVA’s growth to a network of more than 1,500 chapters on campuses in all 50 states and three countries representing over 750,000 student veterans. He has also co-authored the National Veteran Education Success Tracker (NVEST), a comprehensive study of the first 854,000 student veterans to use the Post-9/11 GI Bill. In 2017, he led SVA’s commitment to pass the “Forever GI Bill,” the largest expansion of college aid for military veterans in a decade with an economic impact of $3.4 billion.

Recently, Lyon served as the grand marshall in the 2020 New York City Veterans Day Commemoration, the largest commemoration of service in America. While the 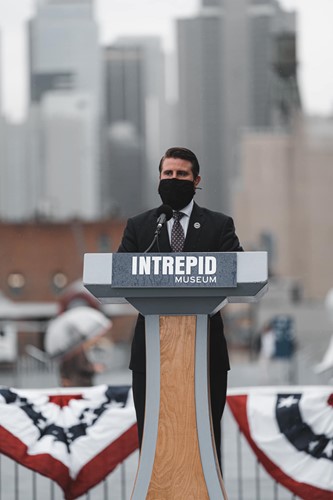 Jared Lyon delivering his remarks aboard the USS Intrepid on Nov. 11, 2020 as part of his service as the grand marshal of the New York City Veterans Day Salute.

ceremony looked a bit different this year due to social distancing guidelines, he was proud to take part.

“It was amazing to see many SVA chapters nationwide and other veteran organizations still find a way to honor and acknowledge service and celebrate the success we’re having as veterans, whether in-person or virtually,” he says. “It would be easy to understand if a lot of these commemorations did not occur, but seeing that they did happen was special and speaks to the importance of the day—not just for veterans, but for all Americans who want to honor and acknowledge service members.”

From his perspective as president and CEO of SVA, an organization that is committed to connecting veterans to higher education, Lyon is proud of the work the Syracuse University is doing to help veterans, service members and their families.

“In my role, I encounter people who question whether or not veterans belong in higher education. Many schools have forgotten that veterans have proven themselves as great students since WWII. Syracuse hasn’t forgotten,” he says. “No matter where you look, Syracuse embraces veteran inclusivity and makes sure that veterans are included in every aspect of the university.”

And as a former student veteran himself, Lyon believes the veterans on Syracuse’s campus are some of the community’s most valuable assets. “If you meet the veterans on campus, you’ll find the most passionate and engaged students,” he says. “The veterans that have chosen Syracuse as their home are excelling on campus and graduating to be amazing alumni.”

Syracuse University’s Women in Leadership Initiative (WiL) is offering a virtual fireside chat, “Lessons In Leadership–Insights from a Collective,” on March 23 from 4 to 5 p.m. ET. The discussion will be hosted by Maureen Casey, chief operating officer for…

COVID One Year Later: Insights from the Military-Connected Community

By Misty Stutsman Fox and Rosalinda Vasquez Maury, researchers with Syracuse University’s Institute for Veterans and Military Families (IVMF) The changes our nation has experienced, both at home and abroad, are considerable and hastening. Economic conditions are uncertain, the federal…

In pursuit of Syracuse University’s continuing commitment to be the best place for veterans, the Office of Veterans and Military Affairs (OVMA) is offering several donor-funded scholarship opportunities and programs for both veterans and military-connected students. Three new scholarships are…

As part of its enduring commitment to veterans and their families and to being the “best place for veterans,” Syracuse University is launching a new program called Operation Veteran Promise. The Office of Admission will grant local students graduating this…