In celebration of veterans, the University recognizes the experiences and stories of student, faculty, staff and alumni veterans. These stories are just some of the many from among the veteran and military-connected community members on campus whom the University is dedicated to supporting. 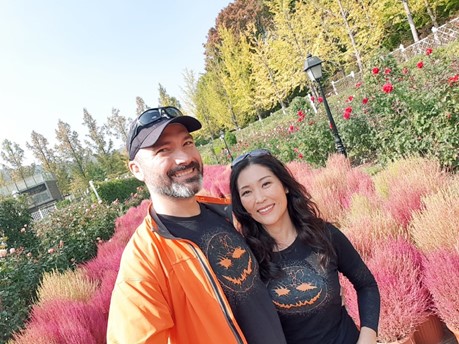 Shanon Meeks with her husband Nathan

Spouses of our nation’s military service members face a unique set of challenges. With frequent relocation and limited access to career enhancing opportunities as a result of these relocations, military spouses can sometimes struggle with feeling left behind. In a recent survey, Syracuse’s Institute for Veterans and Military Families (IVMF) found that 90 percent of female spouses of active duty service members reported being underemployed, meaning they possess more formal education and experience than needed at their current or most recent position. Similarly, data from American Community Survey (ACS) show military spouses make an average of 38 percent less total personal income and are 30 percent more likely to be unemployed than civilian counterparts.

Shanon Meeks knows these challenges firsthand. Originally from South Korea, she met her now-husband while he was stationed there. After they married and returned to the U.S., she recalls having difficulty figuring out what she wanted to do for work. “When I first came to the U.S., I wasn’t sure what I wanted to do,” she says. “Even though I spoke English as my second language, it seemed difficult to find opportunities for myself.” 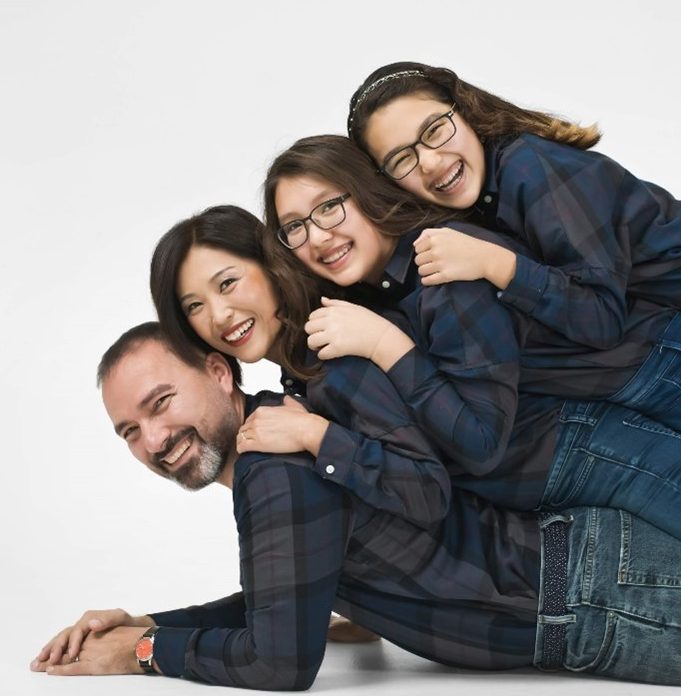 Shanon Meeks with her husband Nathan and their two daughters

As a military spouse and familiar with the Army through her husband, she ultimately decided to enlist alongside her husband. “For me, it was an opportunity to experience American culture and learn a lot,” Meeks says. “I started in finance as an accounting specialist when I joined. When my husband re-enlisted for an assignment to Korea, we went to Korea together.”

Following her first contract, Meeks, a new mom at the time, entered civil service. After working for 12 years in civil service as a budget analyst, she took a three-week finance course at Syracuse University. Here, she learned about the University’s Defense Comptrollership Program (DCP), a unique cooperative endeavor between the University and the Department of Defense in which candidates earn both a master’s degree in business administration (MBA) and an executive master’s degree of public administration (EMPA) degree.

“When the program director explained the program and how it can shape your career and future, I got excited about the opportunity,” says Meeks. “I can’t imagine how much of what I’m learning will impact my management and leadership skills.”

As a DCP candidate, Meeks is learning the essential tools of private and public sector business practices and the ability to analyze and develop public policy. “This program teaches me how to lead people and manage an organization. I’m looking forward to mastering this,” she says. Following her graduation from the DCP, Shanon will work as a Budget Analyst for Army Sustainment Command, G8.

Meeks, who is a both a veteran and military spouse, is proud to celebrate Veterans Day. “Military people and civilian service people are committed to this nation’s safety and freedom. When I think of veterans, I think of their selfless service and loyalty to the country,” she says. She is proud to attend a school like Syracuse that has a strong tradition of supporting veterans.

“I didn’t know a lot about Syracuse University before coming here, but I quickly found out that there are remarkable programs for not just young students, but also for veterans and their families,” she says. “I encourage others who want to find opportunities to check out these programs. You really don’t know how great they are until you get involved.”

When Jennifer Vollbrecht returned from serving in the U.S. Marine Corps, she wasn’t sure what her next step would be. Now the owner and primary consultant at J Vollbrecht Consulting, Inc., Vollbrecht’s path to entrepreneurship started with the skills and traits she developed during her military service. 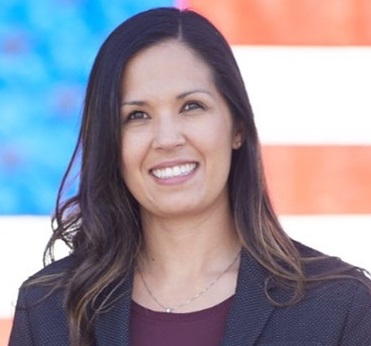 Vollbrecht’s journey to eventually becoming a combat aviator in the U.S. Marine Corps began following the events of Sept. 11, 2001. “Watching the events of that day unfold, I felt a pull to be involved,” she says. “I went to the library and found a book called ‘Marine Sniper.’ I became obsessed, learned all about the Marine Corps, and contacted a recruiter at 16.”

At 18 years old, Vollbrecht shipped out to bootcamp at Parris Island in South Carolina—her first time leaving her home of Northern California. For the next 18 months, Vollbrecht trained for the helicopter crew chief position, which serves as the eyes and ears behind the helicopter pilot. The training involved combat school, rescue swimmer school, mechanic school and flight school. By 2005, she was ready to deploy to Iraq.

“In Iraq, part of my role was casualty evacuation, which meant picking up any wounded team members and taking them to care facility,” she says. “It was very intense but fulfilling. Every time we picked up a casualty, we would paint a cross on the side of airplane to signify lives saved.”

One of Vollbrecht’s fondest memories from her service is when she earned her combat aircrew wings at the age of just 20. “I will never forget that moment,” she says. “It’s a special and rare honor, and even rarer amongst women.”

Following her deployment, Vollbrecht returned to San Diego where she completed the remainder of her tour. She initially struggled to figure out what she wanted to do for her post-service career, but eventually landed in a role at Northrup Grumman as an engineer. 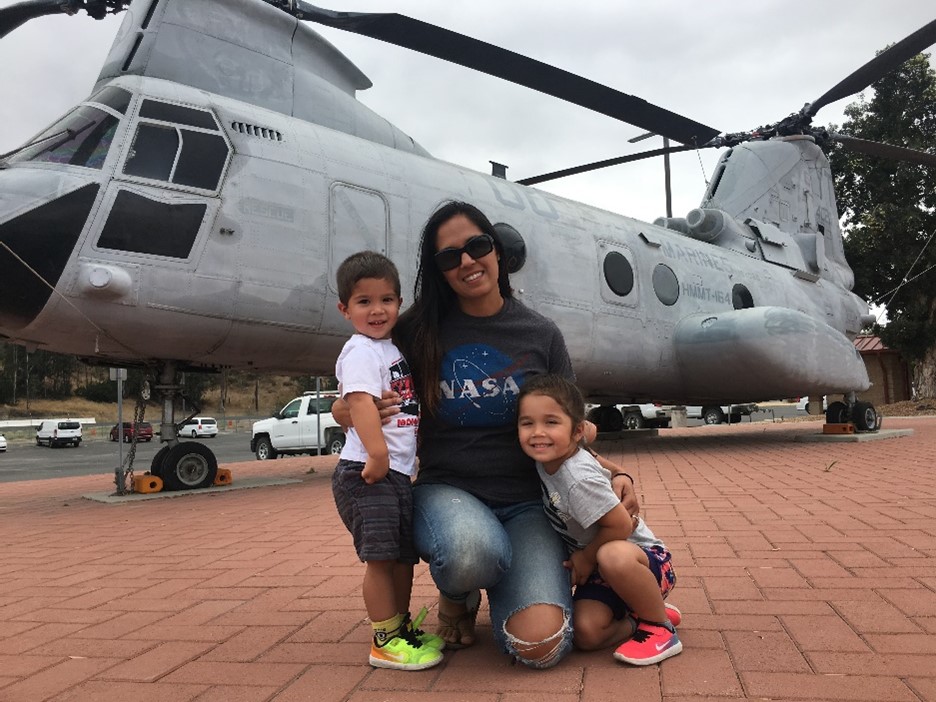 Jennifer Vollbrecht with her two children

“I worked with a lot of veterans there and felt like I fit in,” she says. At Northup Grumman, Vollbrecht got connected with a mentor through American Corporate Partners, a mentorship program that aims to ease the transition from the military to the civilian workforce for veterans. She ended up learning from Reid Hoffman, a co-founder of LinkedIn.

It was then that Vollbrecht discovered Entrepreneurship Bootcamp for Veterans (EBV), a program created by Syracuse University’s Institute for Veterans and Military Families (IVMF) that offers cutting-edge, experiential training in entrepreneurship and small business management to post-9/11 veterans.

For veterans like Vollbrecht transitioning from military service to civilian life, IVMF provides a variety of national programs in career training and entrepreneurship to help them discover their next chapter and how to get there. EBV is a three-phase program, now available at a consortium of nine colleges and universities across the U.S. that provides world class entrepreneurship training and mentorship to veterans and their family members interested in starting a business.

Vollbrecht attended EBV through the UCLA chapter. “I went in without a business plan or idea,” she says. “In EBV, I gathered information, soaked it up, and became super motivated to start my own business.”

Following EBV, Vollbrecht started a family with her husband, giving birth to her daughter in 2013 and son in 2014. While her kids were young, Vollbrecht worked as a laboratory project manager while honing her business idea alongside her husband. 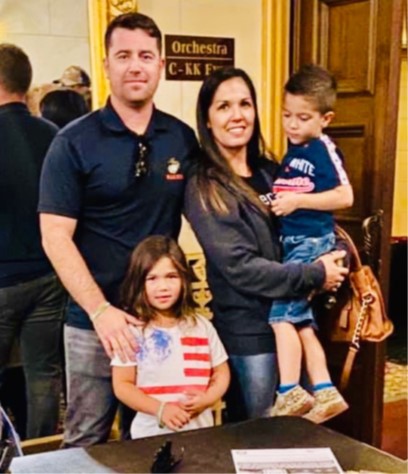 Jennifer Vollbrecht with her family at the Bob Hope Theatre in Stockton, California, celebrating the Annual Veterans Day Ceremony

In May of 2019, she had gathered the courage to quit her job and start her new venture—J Vollbrecht Consulting. Less than two years after its creation, J Vollbrecht Consulting is now the preferred provider of outsourced project management for the U.S. Department of Energy’s National Labs and Department of Transportation Projects, winning three multi-year government contracts to date. Her team has grown from a one-woman business to a team of seven staff members and growing, successfully delivering over $100 million in project management services to the Department of Energy’s National Labs, including the Lawrence Livermore, Lawrence Berkeley and Princeton Plasma Physics laboratories.

Vollbrecht has a long list of goals for her business, including ramping her employee numbers up to double digits and establishing a leadership team. Most recently, Vollbrecht set another ambitious goal to complete an executive doctorate in business at Saint Mary’s College of California, and she is expected to complete the program in 2022. She says that her military experience, along with her participation in EBV, thoroughly prepared her for running her business.

“I know I was born for this,” Vollbrecht says. “I am living my best life. This is my purpose and who I was meant to be.”