This week, Syracuse University welcomed Past National Commander Fang Wong of the American Legion to present J. Michael Haynie, vice chancellor for strategic initiatives and innovation, and the Institute for Veterans and Military Families (IVMF) with the 2020 American Legion Patriot Award. Wong was the first external guest to the Daniel and Gayle D’Aniello Building, home to the National Veterans Resource Center (NVRC), the all-new center for veteran life on campus, in the local community and across Central New York. The socially distanced ceremony was held without an audience in the K.G. Tan Auditorium and was streamed live. 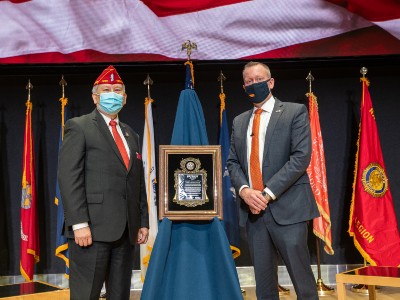 The American Legion Patriot Award is awarded to outstanding citizens who have demonstrated a profound and exceptional commitment to military personnel and their families. “As a New Yorker, I am particularly proud of the atmosphere that Syracuse University provides for veterans,” says Wong. “Over the last 10 years, Dr. Haynie and the IVMF have helped 150,000 veterans and military spouses start businesses, receive and demand professional civilian career credentials, and become empowered to return to communities after service. That’s 25,000 military families whose lives are improved every year, thanks to the work of Dr. Haynie and the staff of the IVMF.”

Haynie founded the IVMF in 2011, creating the nation’s first interdisciplinary institute created to inform and advance the policy, economic and wellness concerns of the America’s veterans and families. Today, the institute is widely acknowledged as the nation’s leading academic voice related to issues impacting veterans and military-connected families.

Wong commended Haynie for his efforts in starting and building the IVMF. “He understands veterans because he is a veteran himself,” he says. Along with his team, Haynie has helped thousands of veterans launch products and businesses through programs like the Entrepreneurship Bootcamp for Veterans, which provides experiential training in entrepreneurship and small business management to post-9/11 veterans. He has also served under two presidential administrations–first as the chairman of the U.S. Department of Labor’s Federal Advisory Committee on Veterans’ Employment and Training under President Barack Obama. In 2015, the White House asked him to serve again, this time as vice chairman of a newly created Presidential Task Force, chartered to set the course for long-term reform at the U.S. Department of Veteran Affairs.

“Today’s veteran organizations look to follow the example of the American Legion with its focus on grassroots advocacy and position to influence and inform the issues that are most important and most pressing in the veteran community,” said Haynie during his acceptance speech. “We are truly honored and humbled by this recognition.”

Haynie and Wong also engaged in a dialogue about issues facing veterans, service members and their families, including higher education for veterans, training for transitioning veterans and the challenges associated with being newly disenfranchised from service.

View the full ceremony and conversation between Haynie and Wong.