In celebration of veterans, the University recognizes the experiences and stories of student, faculty and staff veterans. These stories are just some of the many from among the veteran and military-connected community members on campus whom the University is dedicated to supporting. 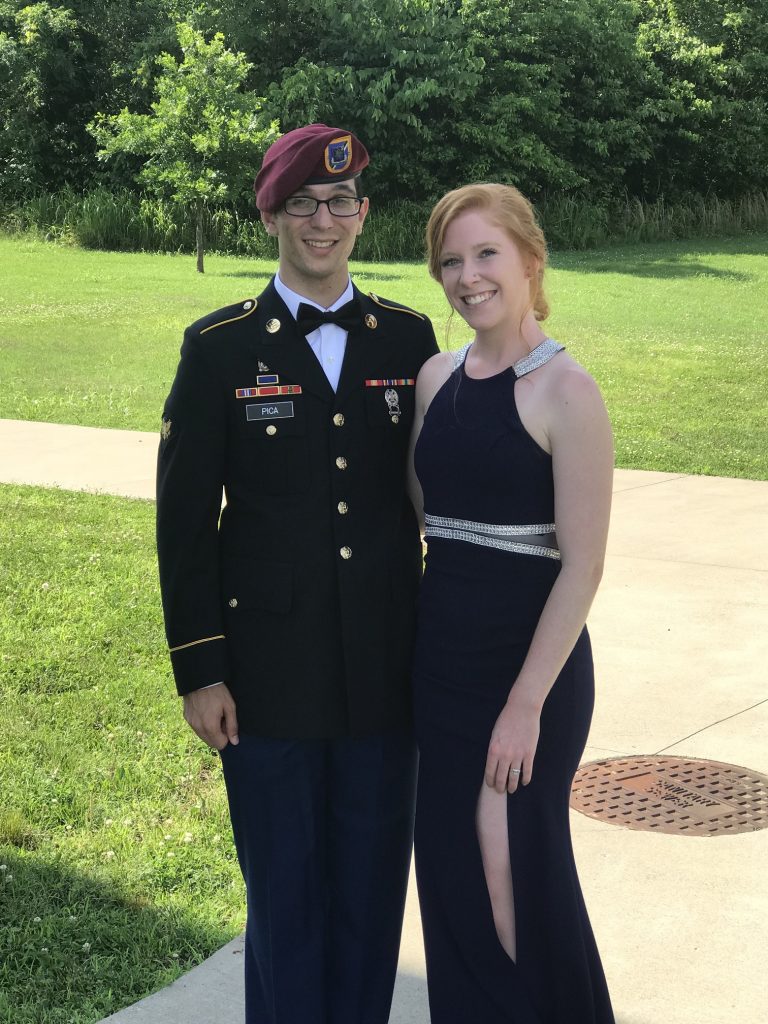 When Miguel Pica goes home from campus, he faces a lot of distractions. Cell phones, television, social media and, of course, all the noise and chaos that comes with being a college student. For Pica though, a lot of the screaming and yelling is not coming from noisy roommates—it’s coming from his newborn son, Lorenzo.

“The service taught me a lot about how to function with very little to no sleep,” says Pica. “I can take advantage of that precious time when he isn’t crying, even if it’s only for a few minutes.”

Pica is a student veteran, majoring in biology with a minor in public health, a path he is pursuing to connect his interest in medicine with his desire to help people. When his son was born at the end of this summer, Pica, who is also majoring in history in the College of Arts and Sciences and the Maxwell School, started to focus on what he may want to do in the next chapter of his life.

“When I originally came here, I wanted to be a veterinarian, but after talking to some of the ones I’ve met, I started to ask myself if I could really do it for the next 20 years,” he says. “I started looking into nursing while I’ve been here and being with my wife [Sara Gehan] while she was going through labor exposed me the idea of nursing.”

Pica served in the U.S. Army as a diesel wheeled vehicle mechanic, which was of particular interest to him after participating in a program in high school that focused on trade skills.“I spent two years learning trades in addition to going to school,” says Pica, “We built a house in Troy, Michigan, that was purely built by students. We built an actual house for someone.” 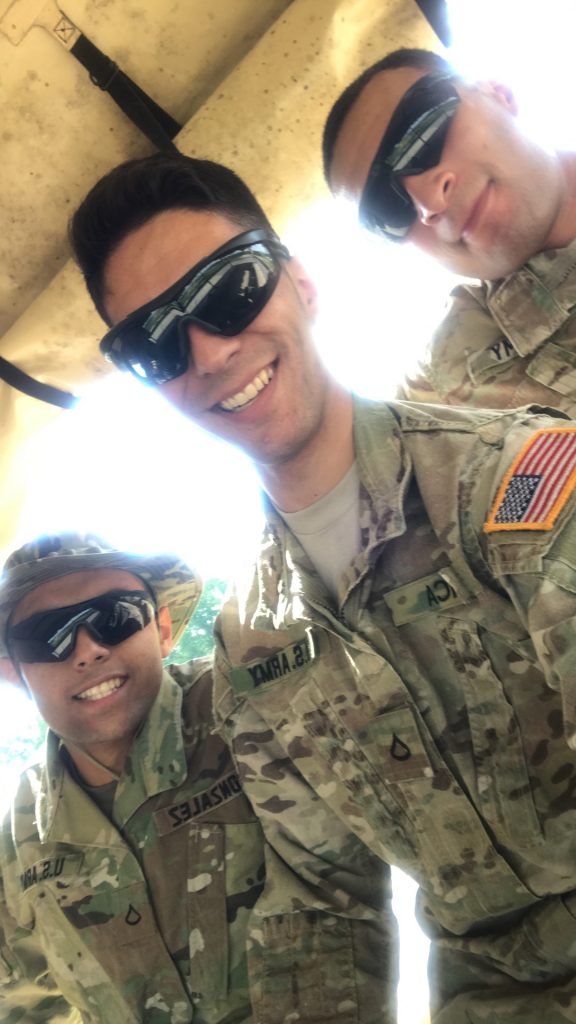 Pica’s drive to help others didn’t develop just by chance. His parents were a big influence, encouraging him to help people and stay involved by volunteering in the community. Both of his parents served in the U.S. Army as well.

“Everyone joked about it when I was growing up,” says Pica. “They thought that because both of my parents were in the military that I would be too. My parents never really pushed me, they just made sure I was informed.”

Pica’s family has a tradition of service going back five generations in the United States, and even before that in Ireland. He brings that dedication to service with him to campus. Pica serves as a PAVE Advisor, volunteers at a local high school for programs with minority students, serves as a senator for the University Senate, works on research within the biology department, serves as the secretary of the Student Veterans Organization and works with the University admissions office. He is most passionate about the times he can help his fellow veterans though, especially those making that leap from military service.

“I know the transition is a big deal, and having a proper hand off means everything,” says Pica. “It can be a challenge to realize you might need some help to be successful. You have to ask for help when you need it, and I’m thankful that we have all the help we need here.” 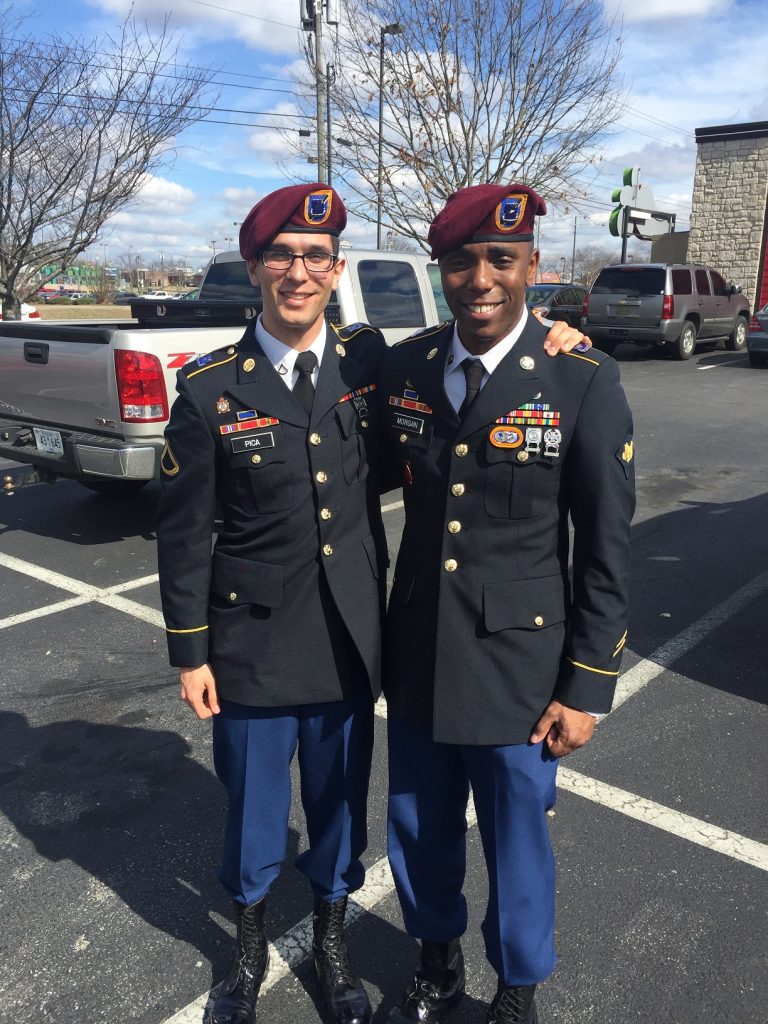 Pica opted to pursue higher education at Syracuse University after hearing about the opportunities the school provides for veterans.

“University of Michigan at Ann Arbor was actually my number one pick,” says Pica, “I grew up around there and I was a Wolverine as a child. Syracuse was never on my radar until I actually got in while I was still on active duty.”

At the time, Pica was studying at a local community college near the base he was stationed. He attended an event hosted by the Student Veterans of America where he was able to speak to staff from Cornell University about his future to attend veterinary school.

“They told me about a lot of the services they have for veterans here at Syracuse and that it might be a better fit for me over Michigan, especially if I wanted to eventually get into veterinary school at Cornell,” he says.

Looking forward, Pica is focused on his studies, his work and of course, his newborn son.

“I hope my son sees what I’ve done and sees that with education, you have a better opportunity to grow,” says Pica. “The best way to be successful in life is to have knowledge. Without it, you don’t know how to get the resources you need.”

Janina Rios Brings Her Passion for Film to Campus 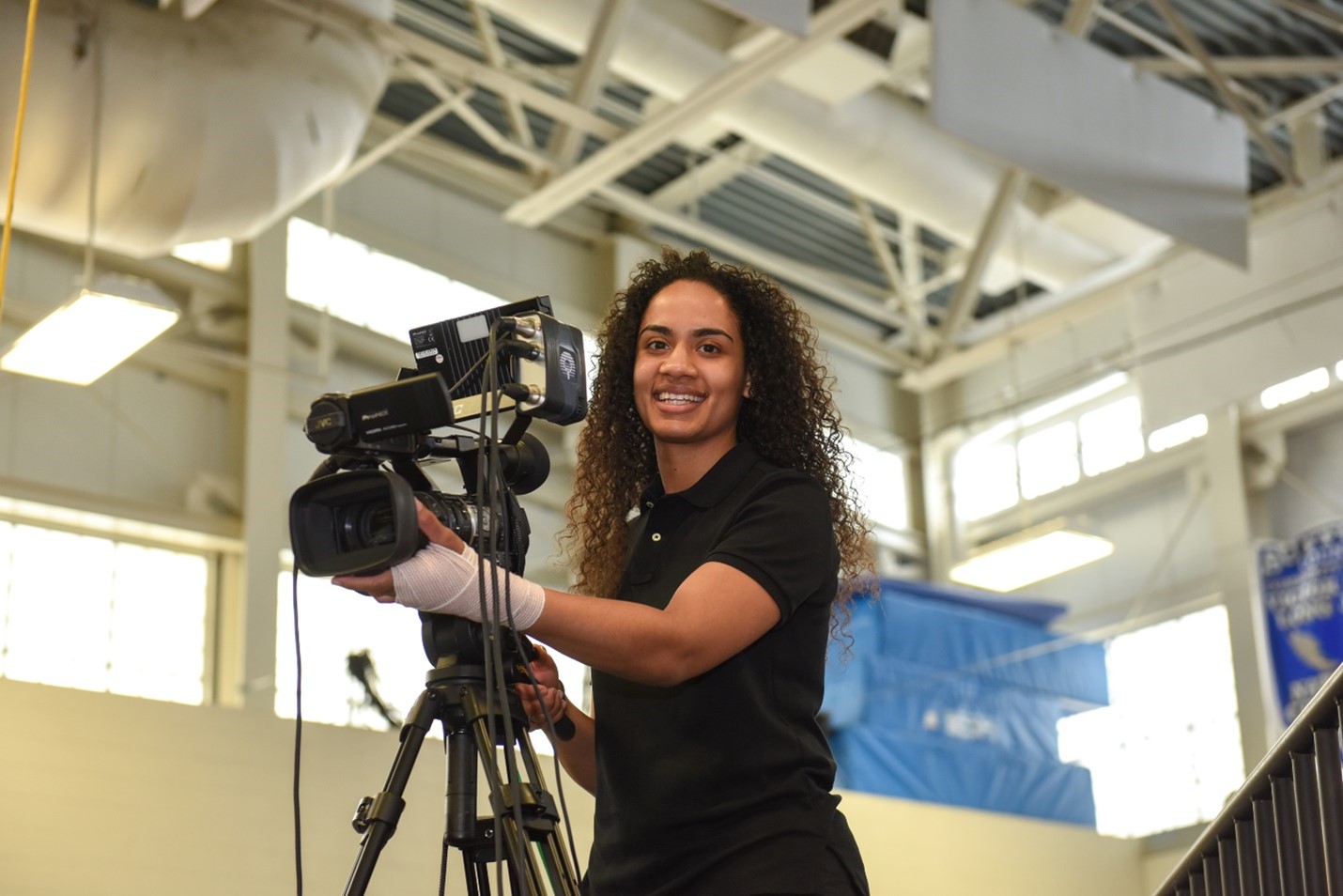 Growing up, Janina Rios didn’t think that going to college was a fit. “Coming out of high school, I wasn’t sure what I wanted to do. I knew higher education wasn’t for me,” she says.

That belief has certainly changed now that she is in her first semester at Syracuse University. After graduating from Suffolk County Community College earlier this year with an associate’s degree in radio and television production, she’s now pursuing a bachelor’s degree in film in the College of Visual and Performing Arts.

“Growing up, I wasn’t a fan of school. There was one option and that was the military,” she says. During her senior year of high school, Rios signed a contract to join the U.S. Army National Guard and attended basic training just three days after graduating. As one of nine siblings, she wanted to stay close to her large family, and the National Guard enabled her to do that.

“I was able to get stationed in Ronkonkoma,” she says. Ronkonkoma is a town on Long Island, New York, where Rios grew up and where her family still lives. “Being so young when I joined, I wanted to be close to the family. It was nice to have that support system.” 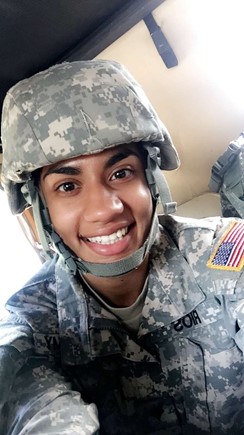 “I realized higher education would allow me to advance in life, ensuring I could provide for my family and myself,” she says. Now, Rios is at Syracuse chasing her dreams. In addition to her film major, Rios is considering minors in photography and psychology. “My ultimate goal is to start a film clinic for trauma victims,” she says, hoping that studying psychology will help her understand how her passion for film can help people heal. “I believe film can help victims of trauma express themselves.”

Rios is a proud veteran and feels especially proud on Veteran’s Day, but she didn’t always think of herself that way. “For a while, being in the National Guard, I didn’t consider myself a veteran. It took me a while,” she says. “To me, anyone who has signed a contract and put on a uniform to serve their country is a veteran and to some, it’s nice to be recognized. I normally take a day for self-care.”

On campus, Rios is pairing her classes with a position at the Office of Veteran and Military Affairs and Institute for Veterans and Military Families as a production assistant. There, she supports productions–from directing to camera operation to editing–and plays a part in telling the stories of veterans and their loved ones while gaining valuable career experience. 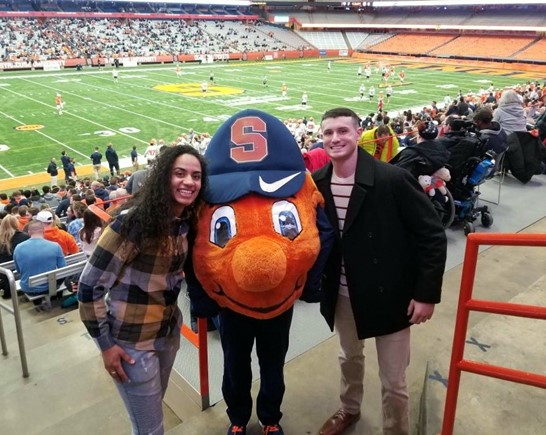 Rios with her friend and fellow veteran, James, attending a Syracuse lacrosse game

As a veteran on campus herself, Rios is grateful for the resources available to military-connected students, and the University’s commitment was a determining factor in her decision to attend Syracuse. “Syracuse University invests in making sure that vets are comfortable and have the resources they need while transitioning or coming back to school. No matter the need, they can meet it,” she says. “Syracuse has welcomed me with open arms so far and I’m grateful. I’m looking forward to the next four years.”