Syracuse LaunchPad startup OthersideAI announced on Nov. 12 that it received $2.6 million in seed funding from Madrona Venture Group, and joined Active Capital, Hustle Fund, Chapter One and top angel investors in Artificial Intelligence (AI) and Software as a Service (SaaS). OthersideAI is led by Syracuse University students Matt Shumer ’22 and Miles Feldstein ’23 and alumnus Jason Kuperberg ’18, who met and created their venture at the Blackstone LaunchPad and Techstars at Syracuse University Libraries (LaunchPad). 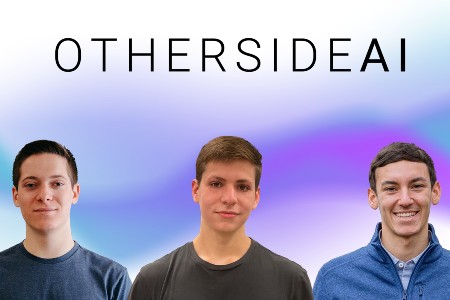 OthersideAI is an email software platform, turning simple summaries into well-written emails in seconds, thus enabling users to save time managing their email correspondence. The team developed OthersideAI as part of the LaunchPad’s 2020 SummerStart Accelerator program.  Since announcing the project mid-summer, the waitlist to onboard with OthersideAI has grown by thousands and has garnered accolades from AI experts around the world.

Shumer, Feldstein and Kuperberg have been active members of the LaunchPad program for several years. The three co-founders have been participants in numerous campus and national competitions, including ‘Cuse Tank, Impact Prize, ACC InVenture Prize, iPrize, Hunter Brooks Watson Spirit of Entrepreneurship competition, Orange Tank and the Hult Prize. They currently mentor other LaunchPad teams and remain actively engaged in the program. “This wouldn’t have been possible without the Blackstone and Techstars LaunchPad network and Syracuse University’s LaunchPad,” says Shumer, who is CEO of the company.

OthersideAI is one of the first commercial products built entirely on GPT-3, the powerful, general-purpose AI model from OpenAI, which delivers natural-language results for virtually any task. OthersideAI was one of the first companies to be granted access to the OpenAI API to help test and refine the technology and has been working closely with OpenAI to build to the safety standards of both entities.

“Email is a crucial application for getting business done, communicating with friends and family, and where we, admittedly, spend many hours a day. However, unlike other applications, email hasn’t evolved in decades. OthersideAI changes that dynamic by helping users compose thoughtful emails with just a couple of bullet points and in their own personal style,” says Shumer. “The response we have had from our early users—and from those who have seen the demo—has been overwhelming and we are looking forward to rolling out OthersideAI more broadly in the coming months.”

“We strongly believe that AI and natural language processing technologies such as GPT-3 will transform many aspects of our lives—from work to our health to leisure,” says Matt McIlwain, managing director of the Madrona Venture Group. “Since our first investment in commercially viable AI technology more than seven years ago, we have looked to back innovative founders like Matt, Miles and Jason, who are building solutions and products that will have significant impact. We are so excited to work with this team as they bring their first product to market.”