The Buddhist chaplaincy at Hendricks Chapel and the Buddhist Meditation Association (BMA) are supporting students through challenging times. In the midst of virtual learning, social distancing and overall uncertainty, Buddhist meditation offers a support system and a skill set to build wellbeing and resilience. Virtual and, prior to the pause of on-campus student activities, socially distanced meditation sessions are open to all students, regardless of religious and spiritual beliefs, five days a week. 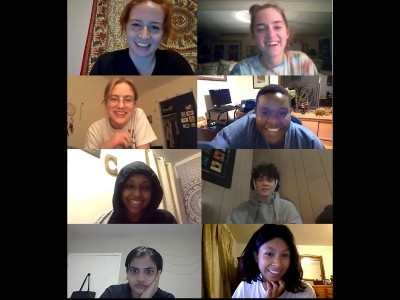 Students participate in a recent virtual meeting of the Buddhist Meditation Association.

Buddhist Chaplain JoAnn Cooke is optimistic that online meditation has worked as a successful supplement for in-person meditation sessions.

“I really want to encourage people to give Zoom meditation a try. You still have much of the benefit compared to being there in person, so virtual meditation is still effective,” says Cooke. “During meditation, everyone agrees to sit still and you do so for each other. On Zoom, you do still feel like you are in a community and even though we are sitting on camera, we are still doing it for each other.”

“Meditation is a personal journey; one doesn’t have to be experienced in meditation to join as there is no expectation in meditation,” says Ryan Bell ’24, a student in the College of Arts and Sciences and a new BMA member. “I have found online mediation and live mediation to be relatively identical. Since meditation is self-driven, the BMA’s mediation sessions really translate to Zoom. I think this makes BMA a uniquely firm organization during the pandemic, and I am so lucky to be a part of it.”

Meditation sessions are offered Monday through Friday via Zoom. In-person sittings have followed the University’s guidelines related to COVID-19 pause periods. When they were offered, they were led by Cooke in the main chapel at Hendricks Chapel every Wednesday at 1 p.m. Visit the Meditation and Stress Reduction website to find the full meditation schedule.

“We would love to increase our engagement with weekly meditations. The majority are hosted on Zoom and act as a great resource for students to be part of a community in their meditation practice. We can all use support to continue healthy habits this semester,” says Sam Luca ’20, a student at the SUNY College of Environmental Science and Forestry and the BMA president.

BMA, formerly known as the Student Buddhist Association, is a group for students of all backgrounds regardless of religious affiliation that is centered around the practice of Buddhist-style meditation. Every first Monday of each month, BMA hosts an open meeting on Zoom for students interested in meditation and the overall organization. The third Monday of each month is set aside for officer meetings. The remaining Mondays of each month are for guest speakers and discussions of topics of greater significance regarding Buddhism and meditation. These “sangha” meetings allow meditation practitioners and those who are “Buddhist curious” to learn more about the beliefs tied to meditation practices. Additionally, BMA is looking to increase its community outreach efforts by partnering with We Rise Above the Streets  and the Food Recovery Network to further its impact in the community.

The Buddhist chaplaincy received national attention recently as the feature story in Tricycle Magazine, one of the largest and most influential Buddhist magazines in the West. The article, titled “Buddhists on Campus,” was written by former S.I. Newhouse of Public Communications Professor Michael Haederle. The article featured Cooke, who shared her own insights on Buddhist practices and the history of the Buddhist Meditation Association, as well as a photo of Syracuse University students from their 2019 visit to Dai Bosatsu monastery. Being featured in the article gave students a positive sense of recognition.

“A student explained to me that the article really highlighted the fact that there is a niche of students who practice Buddhism on college campuses. She expressed that being included in the Tricycle article and magazine really helped her feel like a part of the greater Buddhist student community,” says Cooke.

Greater awareness about Buddhist practices and the restorative power of meditation have led to more partnerships across campus. The Buddhist Chaplaincy has recently increased its involvement with programs at the Barnes Center at The Arch, including a virtual grief counseling program Cooke led in the Spring 2020 semester. Additionally, last year she led a workshop centered around “uncluttering your life,” which drew from Buddhist beliefs on clearing out unnecessary mental and physical messes. Cooke has already planned a new workshop to hold this year centered around sounds and meditation. She believes that she is “just getting warmed up” with her collaborations with the Barnes Center and is excited to do more in the future.

An exciting addition to the chaplaincy’s outreach is a new program that aims to teach mindfulness. Cooke is currently accepting registrations for a new “Mindfulness Training Program” set to launch in the Spring 2021 semester. The multi-tier program starts with a five week ‘level one’ training module, offering participants a certificate upon completion. Participants have the option to continue with three additional levels to deepen their understanding of meditation practices. For each level completed, participants would receive a certificate. Participants can choose to complete as much or as little of the program as they like, although Cooke recommends that participants try to reach higher levels for more impactful results. Cooke hopes that this program will help create a sangha, which is a community of people that practice Buddhist practices, and that participants will feel supported by others in the program.

“I want to give students who are interested in meditation and Buddhism some kind of incentive or reward to come to meetings and to get more involved. Plus, this is something that anyone could add to their resume. Mindfulness is really valued in the workplace and this program allows participants to gain recognition for their meditation work,” says Cooke.

Though some traditional activities like the highly anticipated yearly retreat to the Dai Bosatsu monastery have been canceled, the Buddhist Chaplaincy has made sure that it is still serving its students’ spiritual needs. Cooke and BMA encourage more students to look into Buddhist meditation, as Buddhist practices are not exclusive and can pair well with other beliefs and religions. Anyone interested in meditation is encouraged to participate in BMA programming.

“I am grateful to have the opportunity to continue to provide this space for students of Zen to always have a Sangha to turn to on campus,” says Luca.

Have questions or are interested in learning more about Buddhist events on campus and BMA? Contact JoAnn Cooke at jmcooke@syr.edu.