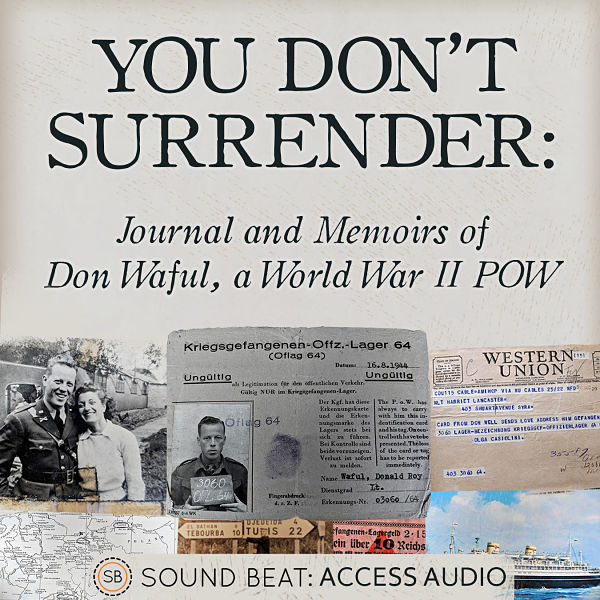 This two-hour production provides remarkable insight into the psyche of a captive soldier set against the backdrop of one of the most compelling events of the 20th century. The journals, narrated by Brett Barry ’98, G’13, tell part of the story. Four interview sessions conducted between 2018-19, with then 103-year-old Waful, gave him a chance to fill in gaps and reminisce on his experience 75 years after the war’s end. A third part of the audiobook voiced by famed broadcaster Sean McDonough ’84 provides reference through a historical timeline. McDonough, who began his career calling games for the Syracuse Chiefs baseball team (of which Waful was former president) also gives the audiobook’s prologue and epilogue.

The journal details Lieutenant Donald R. Waful’s time behind enemy lines. Captured by the German army and held captive from 1942-44, Waful recorded details of daily life, diversions the prisoners employed to pass the time and his burgeoning love for Cassie, the enlisted nurse he’d become engaged to weeks before his capture.

This original audio content was produced by Sound Beat: Access Audio, which creates audio projects that highlight iconic Syracuse University community members. Don Waful (1916-2019) was an icon in the community and on campus for decades. He received his bachelor’s degree from the College of Arts and Sciences in 1937 and his master’s degree in 1939. He was a member of the Alumni Glee Club and quite possibly the longest-tenured football fan.

These interns come from a wide range of programs on campus, including our project partner InclusiveU, which provides support and opportunities for students with cognitive and intellectual disabilities. “You Don’t Surrender” was recorded at WAER and Newhouse studios and was mixed and mastered at Silver Hollow Audio.