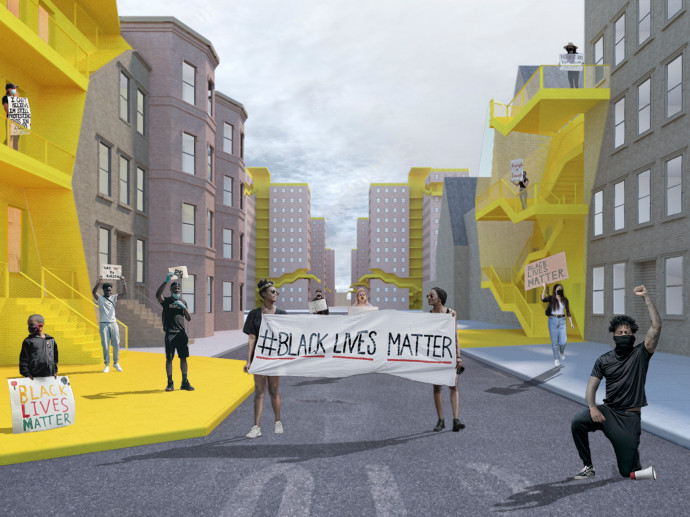 “Intersection of the Uncontained”

A team of fifth-year School of Architecture students have won the grand prize at this year’s Busan International Architectural Design Workshop (BIADW)—an intensive academic program intended to encourage rigorous research and ideas creation of architecture major students from around the world—for their project, “Intersection of the Uncontained,” which explores ways to facilitate and empower social justice movements during the time of the pandemic.

Held annually during the summer since 2003, the BIADW competition is offered by the Busan Architecture Festival and invites students to investigate a wide array of creative architectural and urban design approaches in the context of the 21st-century urban culture.

The workshop, which is typically held over a period of one week at a university in South Korea, was modified into a three-month long online competition this year due to the COVID-19 pandemic.

Responding to the theme, “Balcony and Violin, Life of Post-COVID-19,” teams consisting of one guiding professor and three students were asked to create human spaces of dwelling, meeting and solidarity in the “new normal” after COVID-19 by designing socio-environmental scenarios that generate safer spaces for social interactions.

Historically known as the epicenter of African American culture in America, Central Harlem was not only one of the neighborhoods in New York City severely affected by the pandemic, but it also became one of the largest protest areas for the Black Lives Matter movement. Residents displayed the power of the street through peaceful protests, but such activities became more difficult and dangerous during the pandemic when social distancing was encouraged as a necessary measure to ensure personal and communal safety against the spread of the virus.

Recognizing that Harlem was not a place for reinventing the home office or creating scenarios that provided quarantining or social distancing, the School of Architecture team decided to focus on designing spaces that allowed residents to safely and actively engage in their community in ways that prioritized both their voices and their lives.

“We felt that this workshop would not only allow us to educate ourselves about the racial and socioeconomic disparities happening in our own country, but also create a tool that brought international attention to these issues,” says McLaughlin.

In order to tackle their project’s three main goals—safety, prevention and politics—the team produced a catalog of vertical and horizontal design interventions that challenged the normative views on current cityscapes and addressed physical issues of the site including lack of ventilation, absence of safe outdoor interaction caused by missing balconies and the nonexistence of social distancing parameters on the ground.

Through an interdependent network of façade interventions, roof and ground overlay and street connections that helped merge the two sides of the neighborhood, the team wove together a new unified fabric at the “Intersection of the Uncontained.”

“We pushed the boundaries of stay-at-home orders and allowed people to stand up and step out,” says Serrano.

After undergoing a series of critiques and revisions, the Syracuse University team’s project was selected by the jurors to receive the grand prize, presented by the South Korean Ministry of Culture, Sports and Tourism.

“My students and I had many meaningful discussions about how the pandemic is disproportionately impacting communities of color in the United States,” says Park. “We learned so much about the rich history of Harlem and became inspired by the people who have shaped the neighborhood through the years.”

McLaughlin, Wang and Serrano have chosen to donate their prize winnings to the Harlem-based program of “I Have a Dream” New York, whose mission of providing academic support, mentoring, enrichment and tuition assistance for higher education to young people from low-income communities, aligns with the team’s desire to use their voice and resources to support the Central Harlem community.

“Drops of water, when gathered, can be formed into a river,” says Wang. “We sincerely hope that our efforts will help.”