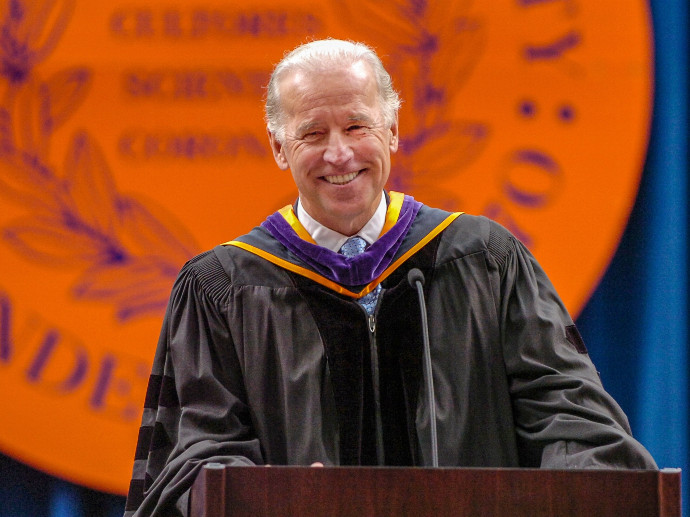 Joseph R. Biden Jr. L’68 today became the 46th president of the United States. Biden, who received a juris doctor from the College of Law in 1968, is the first Syracuse University alumnus to hold the highest office in the country.

Biden has frequently spoken about his fondness for the University and the College of Law and their loyalty to him. “The type of loyalty that this school has extended to me is truly rare and genuinely welcoming,” he said during his 2016 address. “It was the same for my son, Beau, who loved Syracuse as well.” Biden’s late son, Joseph R. “Beau” Biden III, was a 1994 graduate of the College of Law.

In May, as part of Syracuse University’s recognition of the Class of 2020, Biden congratulated the new graduates—a class graduating amid an unprecedented global pandemic. “We have a real opportunity to come out of this crisis stronger than we’ve ever been. And this Class of 2020, you’re going to be a big part of that,” Biden said. “I can’t wait to see what you all accomplish. We need you. Go Orange!”

President-elect Biden received the University’s Chancellor’s Medal in 1974; the Law Alumni Association’s Distinguished Service Award in 2003; and the George Arents Pioneer Medal, the University’s highest alumni award, in 2005. In 2018, he was honored with a prestigious Syracuse Law Honors Award from the Syracuse University Law Alumni Association and the College of Law. The award is conferred on alumni and friends of the college for extraordinary career accomplishments and service to the college, Syracuse University, the legal profession and society as a whole.